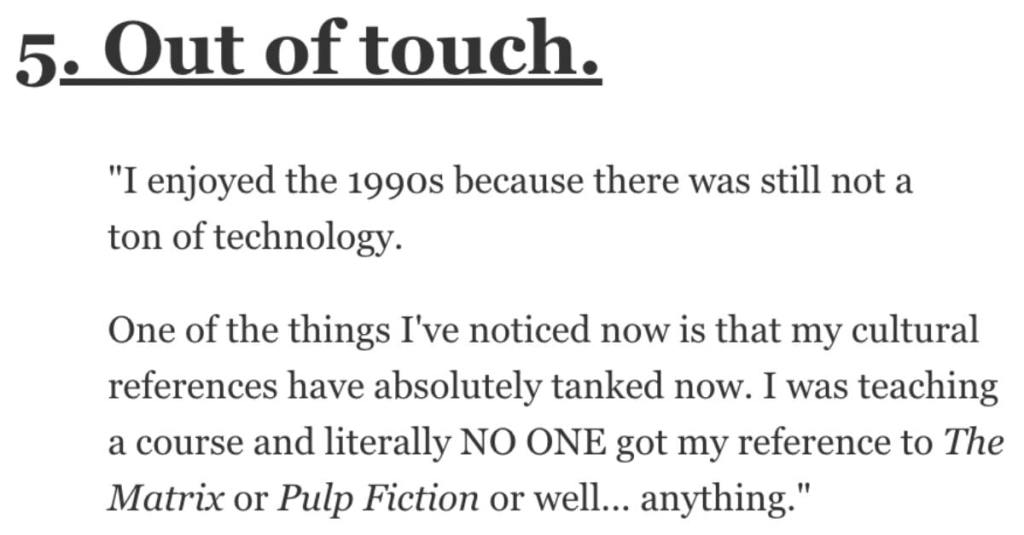 Veteran Teachers Admit Which Generation They Enjoyed Teaching the Most

My oldest sister has been a high school teacher since 1995 and she likes to tell me stories about how the kids have changed throughout the years.

Because you know what they say…kids today! And that saying exists because it’s true.

Teachers who have been around for a while talked about which generation they’ve enjoyed teaching the most on AskReddit. Let’s see what they had to say.

“I taught in the late 70s, early 80s in northern Alberta.

The nice part about being that early in my career, plus in northern Alberta, was that you could pretty much do whatever you wanted. My kids found an injured duck on the playground and we brought it into the classroom and spent weeks nursing that duck back to health.

As the duck grew stronger, he would do these practice flights in our classroom to the point where he would do a couple of laps around the room and my kids wouldn’t even get excited about it. Later in that same year we grew hydroponic tomato plants that went from floor to ceiling and were able to harvest tomatoes in the middle of winter.

Man, that was a great year! Pretty sure you couldn’t do most of that in a grade one classroom these days.”

“In my mind kids have always been good at heart, but society and their upbringing is what ultimately shapes or corrupts them.

Unfortunately, I think more kids nowadays have mental health issues since they unconsciously compare themselves to their peers. The difference is 20+ years ago kids only compared themselves to the few hundred kids in their school.

Nowadays, they are comparing themselves to the millions of kids they see online.”

3. Breaking down the years.

17 – under so many layers of irony and memes they dont even know who they are anymore or care. there’s no point in being creative or devolving a personality, anything you could think of has already been done.”

I like the younger students for their curiosity and eagerness and excitement when new ideas are being introduced or there is some challenge/learning-related contest going on in the class. This gets more difficult to cultivate as a group-energy level in the puberty years, and easier afterwards.

But I’ve had some kids in the 12-14 age group come in during lunch to continue their activity just because they were so engaged in what we were doing, and I was cool with it as I ate my lunch in the classroom and therefore my classroom (I taught computers, so other labs were often locked after classes) was always open.

It is very obvious when you see the interest and level of engagement from a class that is ready to learn, it is almost like when an engine is reving up and all cylinders are firing in sequence; you can really feel the energy. But you notice the differences as some classes just ‘click’ with their teacher more than others, even in the same year.

For those who may be wondering why that is, I like to think of each class as a sort of team, as in sports. I suspect that if there is a certain threshold of active, curious and interested students in each class then that interest level and energy just is infectious and becomes the overall mood of the class. A few leaders in the class can raise the energy of the whole ‘team’.

Of course, it’s the same story if there are enough disinterested students in a class who honestly don’t want to be there and have no interest in learning.

Sprinkle in a few more who prefer to disrupt a class for laughs and that just drains the interest and excitement right out of the room unless the teacher or occasionally some students can reassert the need for respect so learning can continue uninterrupted.

It can really be apparent when you are teaching the same exact lesson to different classes on the same day as you will see which ones are into it and which ones just aren’t.”

“I enjoyed the 1990s because there was still not a ton of technology.

One of the things I’ve noticed now is that my cultural references have absolutely tanked now.

I was teaching a course and literally NO ONE got my reference to The Matrix or Pulp Fiction or well … anything.”

It was the first time I felt that internal twinge of being “out of date” and realizing I was teaching 17-18 year olds who were being BORN when that movie came out.

“When I started teaching in the early  2000s, students still got my most obscure Simpsons and 80’s film references. By the late 2000s, I had nothing left to reference.

By the early 2010’s my kid had reached adolescence, so I had new material, but it really wasn’t mine, and the culture had splintered so much that my Rick and Morty references only hit about 30% of the class.

Lately I just stopped trying, and became that old, out-of-touch Prof; I lived long enough to become the villain.”

Students were so eager to learn kept me on my toes. They were respectful and the parents were supportive. Little by little things started changing. Complaining about colors of napkins, words like angels, witch, . It kept getting worse. The amount of paperwork and meetings no time to teach.

The testing got in the way took time away from teaching and what was important which is the children. Little by little it took most of my energy. Stopped teaching after only 13 years.”

“My mom was a teacher from the mid ’70s up until covid hit and she retired for good.

I think she liked ’80s and early ’90s kids best. Parents still had respect for the teacher, as did most kids, and our government had not yet ran education into the ground with cuts and overcrowded classrooms. Plus ’80s and ’90s kids had silly fads and were kind of quirky and fun.

She said the biggest difference now is resilience. Kids today have bigger difficulties with overcoming things, more anxiety issues, many refuse to even try something for fear they’re not good. It’s not an issue with the kids per say, generally most things can be traced back to parents, who are putting more pressure on kids.

Also, the biggest difference is parents. It used to be parents and teacher were more a united front. Now parents are angry at the teacher if their kid doesn’t do their homework or work in class, or accuse the teacher of lying if the teacher says their kid did something bad.

I’m a teacher too, but have been teaching less than 10 years, so I have little comparison. But I can say that as a kid in the 90s, I can’t remember other kids saying “no” to teachers. We may have groaned or whined, but we didn’t refuse.

Today I’ll have an activity or game and kids will flat out say “no. I’m not doing that”. Kids refuse to participate to my face. I hear “no” all the godd*mn time, and it’s frustrating when I know my lesson slaps. They just say no to everything.

Also kids complain when you put on a movie. It used to be, when your teacher wheeled in the big TV cart, the class cheered. We didn’t care what it was. Now all you get is “ugh no I don’t like this movie/ I’ve already seen it/I don’t want to watch/ this is boring” and I’m like HOW DO YOU CHILDREN NOT LIKE MOVIE DAY.”

“Started teaching at university in the 2000s.

Kids were really cliquey (into what sub-culture or tribe they were in and didn’t mix) and intolerant of difference (of any kind). Was 10 years older than them, most had no idea how to save a file on the computer into different formats. Had to tell kids not to describe things they didn’t like a ‘gay’ ALL THE TIME.

In the 2010s they started being better at technology, but worse at fixing it when it went wrong, getting more tolerant, more likely to mix. 2020s kids are really tolerant, kinder, but much, much sadder.”

I enjoyed teaching in all of those years and enjoyed knowing almost all of my students. I feel that any observations I might make would be so prejudiced by my own reactions to the era and my own aging that it’s a bit of a ridiculous question.

I do think that more people need to commit to better parenting, as I was appalled by how scarred many students were by sheer parental neglect and abuse, regardless of the era. I don’t think abuse has become any more prolific, but I recognized it more and more as I became a veteran teacher.

Other than that, talking about people by generations is just another way to divide us and keep us quarreling; otherwise we might notice that we’ve all become the property of corporations. And they don’t want that.”

“Kids don’t change, but accountability is gone in my district.

First half of my career (90s, 00’s) students and parents were far more accountable. Today, if a student does not thrive, it is blame the teacher all day, every day. Teachers now compete with Tik Tok, Snap Chat, video games etc…and there is such a sense of entitlement, at least in my district.

The students are still great, but the adults have messed this up so bad. We have eliminated all deadlines in my district, and students can re-do an assignment over and over until they get the grade they want.

Consequences can be great learning experiences, but we are no longer able to apply them.”

Have you been teaching for a while?

If so, which generation of kids has been your favorite?