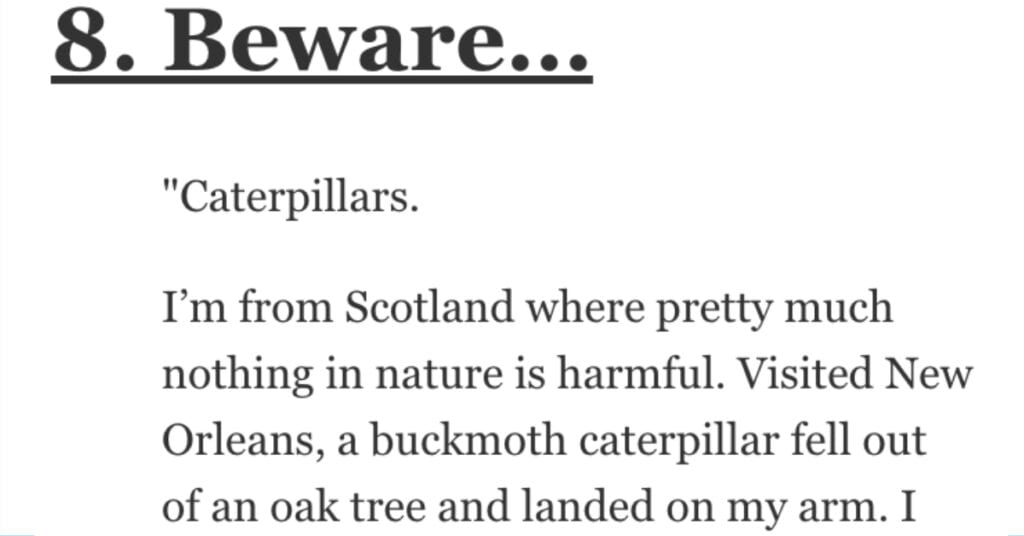 What Animals Are Unexpectedly Dangerous? People Weighed In.

You never know what you’re gonna get with a wild animal.

Or an insect. Or any other specimen in nature.

And that’s why you have to be careful around all of ’em! Maybe they have rabies, maybe they have a poisonous bite that you don’t know about, or maybe they look adorable and cuddly but they’ll rip your face off.

So keep your eyes open!

AskReddit users educated us about animals that are unexpectedly dangerous.

“At the Birmingham Sea Life Centre, if an otter escapes they have to evacuate the building and send in guards wearing chain mail.”

“Dolphins, they have teeth and kill for fun.

“Some seals are psychopaths.

Other than humans and orcas, they’re one of the only animals on the planet that seems to occasionally k**l for fun.

They’ve been found to continue k**ling penguins even when they’re no longer hungry and they’ve even been photographed tearing ocean sunfish apart and then not eating any of the meat.”

Probably already been said, but they have hooves the size of dinner plates and if you mess with a momma with calves, she will f**k up your life. They are also fast as f**k and 6 feet tall at the shoulder.

Don’t be fooled by their cute, smooshy noses.

Signed, a guy who grew up in rural Alaska.”

They have a back talon that’s incredibly sharp.

They jump about 2-3 feet in the air and kick with their talons when scared or protecting the flock.”

I have a squirrel that I started putting out peanuts for, she is so used to being fed that she stands outside my back door and taps on the glass some days. I can tell this squirrel apart from the other squirrels.

Usually I open the back door and the squirrel will sit on my back fence. I wave my hand at it and it backs up a few feet for me to put some peanuts out, then I close the door and it starts eating… One time I guess it didn’t like how long I was taking and bit my finger and clawed my hand.. Blood was gushing out of my finger.

A second time a different squirrel was sitting outside my back door… It looked pretty thin so I opened the door to put out a handful of peanuts, my hand was about 2 feet above the squirrel… And I guess it was startled, the little f**ker jumped in the air and lunged at me… Bit hard into my finger and would not let go, I had to shake it off… Blood was pouring out the same finger.

Luckily squirrels do not carry rabies, but I went to the doctor and got a tetanus shot anyway. My doctor had never had a patient that was bitten by a squirrel and had a pretty good laugh.”

Everybody knows that they’re big but thinks they’re slow and lazy; not nearly enough people know how fast and aggressive they are.

Y’all, please stay the hell away from hippos, especially if you’re in the water where they’re most territorial.”

I’m from Scotland where pretty much nothing in nature is harmful.

Visited New Orleans, a buckmoth caterpillar fell out of an oak tree and landed on my arm. I felt like my arm was literally on fire. It swelled up, went really hard to the touch, and was BURNING. My my friend’s mum had to use tape to get all the barbs out of my skin.

Ever since then, my skin has been horrendously sensitive. I now have medication for rosacea, because my stupid immune system is terrified of flipping caterpillars and will freak out at almost anything.”

I’ve seen videos of people handling them out of water.

It carries enough venom to k**l 26 adult humans within minutes. Their bites are tiny and often painless, with many victims not realising they have been envenomated until respiratory depression and paralysis begins.

They kill very quickly, and there is no anti-venom.”

“Studied abroad in Australia for 5 months. There’s a colorful peacock looking emu like animal there called a Cassowary.

Apparently, it’s one of the most dangerous animals in Australia specifically because no one thinks it looks dangerous except for the fact it’s got a hard bone like horn on its head that it uses to k**l.”

“Koalas. They are the absolute worst.

We had this “girls in science” club when I was in middle school and we were invited every now and then to see some animals behind the scenes at the San Diego Zoo.

When we go to the exhibit, the club was all too excited when some of the trainers came out with three young koalas. One of the trainers, however, was giving all these warnings about koalas about their bipolar temper, kinds of diseases they can give, and all kinds of other stuff.

So a girl was asked to volunteer to hold one of the koalas. We will call her Sara. This one koala bear, the trainers claimed was the calmer one of the three. Sadly it wasn’t the case. Sara was given this leather bib looking thing to wear while holding the koala.

All the girls looked absolutely pi**ed that they couldn’t have a turn holding the koala, but that all quickly changed after like two minutes. This koala started making weird noises, and the trainer was next to the girl the entire time trying to reassure it. The trainer had some snacks she left on the fence behind us, and went to go get them. She shouldn’t have left Sara.

I felt so bad for her. Sara was terrified the moment this thing started screaming. It ended up scratching the side of her arm, completely unprotected by that leather bib thing, and bit her there as well! Sara was screaming her f**king head off and so were the other girls!

I’m pretty sure I was too. After that she had to get tested for all sorts of things when her parents took her to the hospital. And that was the end of girls in science club. I’m pretty sure she got a payout from the zoo, but I don’t remember. This s**t wouldn’t have happened had we seen the polar bears.

“I grew up in the country and was around a lot of wild animals growing up.

Cut to I was living in LA for a little bit when I saw a raccoon in broad daylight foaming at the mouth and just just sitting there looking pi**ed off. I immediately step back and I see some 20 somethings girls going oh my good look how cute it is. I want to get a picture with it.

I yelled at them hey guys that raccoon likely has rabies and you should stay the f**k away from it. They didn’t listen. They got close to it. It got really f**king pi**ed off and tried to bite them, it didn’t thank god. But as I witnessed this I said, don’t say I didn’t tell you to stay the f**k away.

Even if it didn’t have rabies those wild trash pandas can f**k you up if they feel threatened.”

Do you know about any unexpectedly dangerous animals?

If you do, tell us about them in the comments.