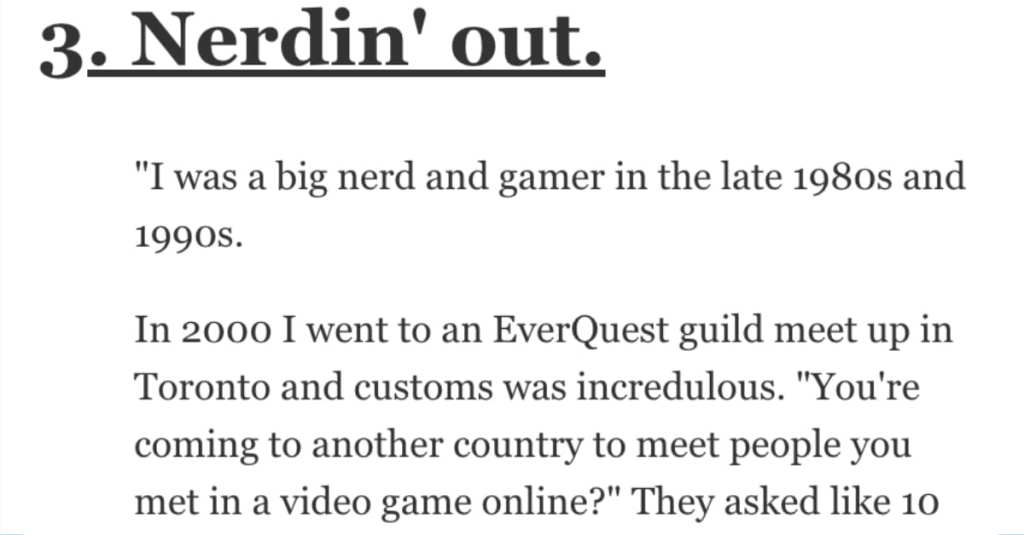 What’s Your “I Did It Before It Was Cool” Thing? People Responded.

I remember when I first started going to punk shows in small coffee houses, garages, and basements, it was kind of intimidating.

I was a normal suburban kid without a chip on my shoulder, but some of the people at these shows clearly didn’t want new kids coming in and being a part of a scene they’d been in for a while.

But I guess this sort of stuff happens all the time, right?

Folks on AskReddit talked about what they did “before it was cool”.

“Listened to podcasts before they were podcasts.

Recorded shows (just like today, some were for online distribution, others were recorded versions of broadcasts) were put on a web server or FTP server where you could come download them.

They weren’t quite podcasts yet, because the idea of hooking them up with an RSS feed hadn’t come out yet (not even sure if RSS had been invented yet, TBH) so I had a script that ran as a cron job on my desktop, which would grab a directory listing at regular intervals and download anything I didn’t already have.

Most of them were MP3, of course, but at least one was RealAudio.”

“Everything nerdy. I attended high school in the 90’s and you kept the nerdy s**t hidden.

Then came the Star Wars special editions. Then LOTR won a bunch of Oscars. Nerd stuff became more and more mainstream. Then the cool kids started watching Game of Thrones. Now dungeons and dragons is having its biggest growth ever.

So grateful. I love how it’s no longer niche targeted at young males.

Now, the neckbeards who get triggered over “fake geek girls,” I dont understand them. I’m old enough to remember when a girl who had the same interests as you was “a good thing” and “the basis for a relationship.””

In 2000 I went to an EverQuest guild meet up in Toronto and customs was incredulous.

“You’re coming to another country to meet people you met in a video game online?” They asked like 10 times in different ways.

Then in 2008ish I went to Toronto again for a (then-WoW) meet up. “Why are you coming to Canada?” “World of Warcraft guild meetup.” “How long are you staying?” “A week.” “Enjoy your visit.””

Literally the only channel that was decent in my house was PBS.

As soon as I came home from school it was on.”

“Black Panther was my son’s favorite superhero back in like 2014.

There was no character merch and I paid ridiculous money to find discontinued Black Panther toys.

Flash forward a couple years and we’re at the theater on opening day in full Black Panther costumes.”

“I was the first boy in my middle school to pierce my ears (trying to be like my big brother).

Everyone roasted my a** to the point I just had to take them out.

Fast forward a couple years to high school and every dude that gave me s**t for pierced ears had gotten it done themselves.”

I pl ayed it way back in the Alpha version before everyone and their mom knew about it.

Watched Seananners make a video about it and bought it immediately and that video was the first spark towards it being the giant it is now.”

That was big back then. I got some ad revenue, a couple of sponsors, and people putting my videos in compilations.

Haven’t done anything with it since then.”

We had a copy of the Philosopher’s Stone before a second book had been announced, and before either of them had come out in the US.

Absolutely obsessed with it – you couldn’t really get any toys or merch back then besides the books themselves so we would make our own.”

“I was into Nirvana early on.

I was a subscriber to the Sub Pop single of the month. I heard their cover of Love Buzz before it appeared on Bleach I think it was November of 1988.

Saw them twice before Nevermind was released.

Feb 1989 at Marsugi’s in San Jose with Mudhoney. Was a spectacular show in a venue that held less than 70 people. I think it took a couple days of days for the ringing to stop. But it was worth it.

Saw them a year later after Bleach was released at the Cactus Club.”

11. Before it came overseas.

“Watching the Office as an American when it was only the UK Version as it first aired in the US.”

“F**king everything. I’ll start doing something and it blows up in a few years. And I am far from cool.

I am a 33 year old fat white lady who can barely use her cell phone. My husband calls me “accidental hipster.””

“When I was growing up, my dad had an extensive record collection from the 50’s and 60’s. And I always loved putting them on and listening to them.

They were all country/bluegrass, and some jazz. But I was huge fan of folks like Patsy Cline, Buck Owens, Dolly Parton, Eddy Arnold, Chet Adkins, Boots Randolph and Johnny Cash just to name a few. Also had some musicals in there like Annie Get Your Gun. We had so many, we hand to store them in a trunk since it collapsed out bookshelf.

This was of course during the rise of CDs, so finding vinyl was hard unless you came across them at a flea market, or Goodwill or something.

Seems weird now that Vinyl is outselling CDs and Dolly Parton and Johnny Cash are legends in our generation now. And my favorite song from Annie Get Your Gun is now remixed for athletic commercials (anything you can do I can do better)

What did you do before it was cool?