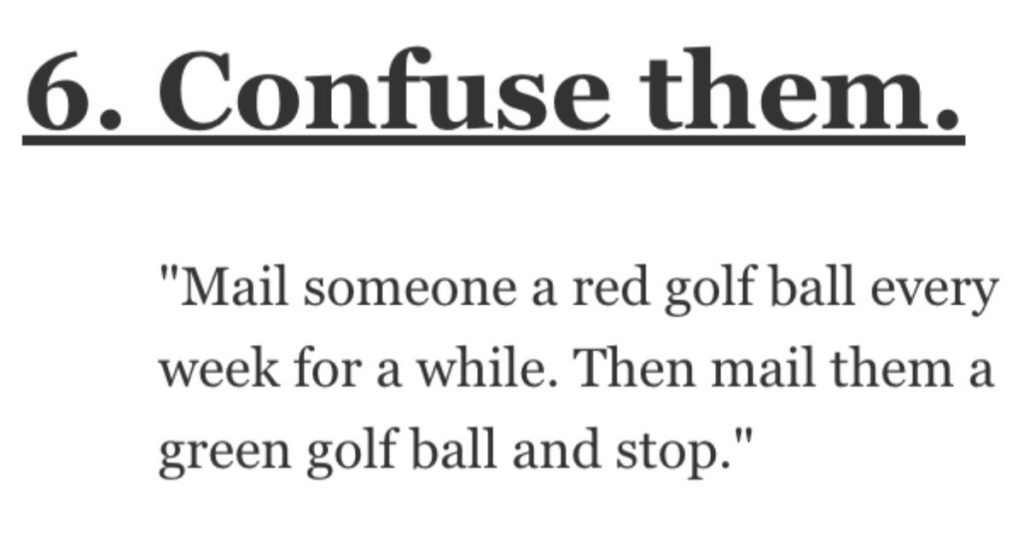 What Are Some Harmless Ways to Mess With People? Here’s What Folks Said.

Let me tell you something, pal: messing with people in a harmful way is OUT these days.

Instead, doing it in a harmless way is now totally hip!

And all the kids are doing it!

So let’s learn about some harmless ways to mess with people from AskReddit users.

“If I know someone is walking a little ways behind me and I turn a corner with nobody else around I like to run 10-20 steps to widen the gap and then laugh to myself thinking that the person behind me will be confused.

I doubt anyone ever notices but I get a kick out of it every time.”

“I am in a decades-long prank war involving the hiding of small unwanted objects.

Sometimes I’ll be doing something months later and get a text with a picture of the object accompanied by a “you b**tard.””

“The movie theater in my town is usually mostly empty.

There’s been a couple of times when I’ve come in to get seated and there’s literally only one other person in my auditorium.

There’s an evil part of me that wants to just go sit right next to them. Not illegal, but it should be.”

“Don’t turn around when you walk into an elevator.

And then ask them if they are ready to take this to the next level.”

“My friend was logged into his twitter on my tablet so I kept changing his profile picture to a banana.

He thought someone hacked him and tweeted about it. I replied to the tweet using his profile.

It got so bad he was arguing with himself on twitter.”

“Mail someone a red golf ball every week for a while.

Then mail them a green golf ball and stop.”

“My grandpa glued a quarter to his driveway near the sidewalk and sits in his living room and watches people try to pick it up.

I didn’t know this till I found a quarter in the driveway one time.”

“Whenever I visit my extended family across the country, I bring a bag full of random remotes that I don’t use anymore.

Just random remotes that go to old dvrs or anything really. Just hide them around their house, they only recently caught on.”

“I was talking with a supervisor and I happened to have like 4 hard boiled eggs in my jacket pocket for lunch.

So while talking with stuff, I took out an egg, cracked and shelled it and ate it. The conversation kept going so I did it again but I could see he was growing quizzical. I waited a few more minutes, pulled out another and ate that too. By then I could tell he was like WTF.

The conversation was wrapping up so I pulled the last one out and he stopped mid conversation and asked me, “how many f**king eggs do you have?” I just shrugged, shelled, and then ate, the last egg.”

“My mom has a bunch of framed family photos hangin on a wall. One day I was visiting I took them all down and scanned them with a little hand scanner.

I photoshopped small changes on them, removed some people from some photos, added a couple of celebrities in the background, etc, print them out and replaced them a few days later.

I can’t forget her face when she realized it was me and she was not losing it.”

11. Tell me about yourself.

“When having a conversation during a meal, specifically only ask questions to people that are chewing.”

“If a bird lands by you and there are people around, crouch down towards the bird and ask “did you bring my messages?”

And then just go back to what you were doing.”

Do you have any good ideas about how to harmlessly mess with people?