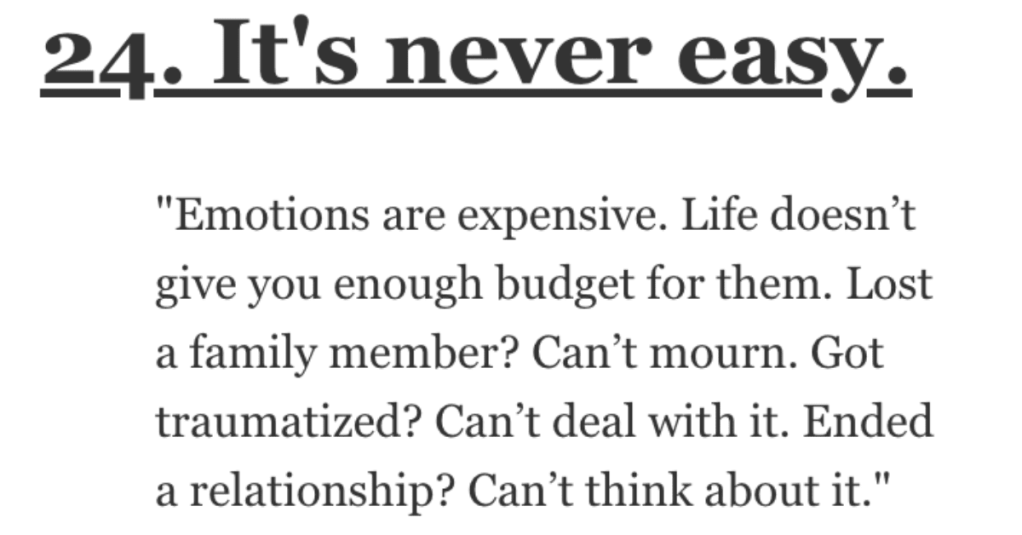 What Depressing Truth Have You Accepted? People Shared Their Thoughts.

Life is hard and there are some things you just have to accept.

And a lot of those things are real downers.

AskReddit users weighed in on the depressing truths they’ve accepted.

“I will probably never own a home or have children even though my childhood was spent being told that these are things all adults achieve.

And I make okay money, but it’s not enough to be middle class these days.”

“That one person I wanted to help and couldn’t isn’t going to change anytime soon, if ever.

I have to accept that I can’t help them, and let them go.”

“I can never be the talkative funny extroverted type of person I surround myself with, and will always be quiet and introverted who’s voice is too quiet to be heard.”

“I’ll more than likely spend the rest of my life alone because I am extremely uncomfortable being around people.”

“Karma isn’t real; it’s a concept made up by humans to try and cope with unfairness in the world.

When someone ‘gets what’s coming to them’ it’s only law of averages – most people get away with sh**ting on others.”

“We are all here just to save up for retirement. That’s our only purpose unless we are born to riches.

The only consolation are a few out of town/country trips in a year, a small room that isn’t even yours and a netflix subscription.

All of these we do on repeat everyday as we wait for the sweet release of d**th.”

“The entertainment/arts industry is not only NOT a meritocracy but you could be the most talented person on the planet, but without both luck and timing (or being born into the right family) it’s almost impossible.”

“No one has your best interest but yourself.

Realizing this has made it difficult for me to even bother making new friends or bother sharing anything about myself to friends and family.”

“My parents never loved me. They are narcissists.ans have personality disorders.

I was always.the family scapegoat and then I left so they couldn’t do the same to my kids. I recently realized a story they have told me my whole life is literally them hammering in their albi for the two times in my infancy I almost d**d.

My mom said the first time she was on the phone with a friend when she, “found me blue,” and somehow got me back. I was on a home monitoring system for a year. They claimed the one night they went out I chose to give them a hard time by stopping breathing.

I didn’t realize that they said this so they didn’t look suspicious and that they shook me. Likely my dad because he is violent and a hair trigger. I was in occupational therapy until high school because my gross motor skills were so effected. I was told I would never write pen to paper, but I can because I worked d**n hard at it.

They also claimed a d**nk family member threw a basketball at my face and broke my nose when I was one. Not sure if they let a d**nk guy hurt me or the more likely, my dad got made and hit me and they covered for him. Conviently the person they said did it was someone who d**d when I was young so I could never ask them.

He was an alcoholic, but my mom never let me out of her sight. And my dad got annoyed at everything. How many times did they hurt me and no one helped me? Why didn’t CPS ever investigate them? My mom took me to so many doctors. I am still trying to sort out my health as an adult.

I believed it was okay because my dad usually didn’t hit me. He screamed in my face, pulled my hair, pushed me (down the stairs a few times) and spit on me. There are holes in the walls where he made it clear he was good with causing damage.

My mom was worse in so many ways. She always wanted attention and so she made me sick. I can’t prove that, but I know I have been healthier without her. Her cooking was dangerous. Her lies and manipulations were worse. I was responsible for everyone’s else’s feelings and not allowed to have my own.

I was the fixer. I had to chaperone my older sister so I was the bad guy. I was used for free labor for my aunt and uncle’s many business schemes. I was forced to be under her thumb and never do anything for myself.

I cut my parents out of my life three and a half years ago. They stalk and harass me, but my life is still better without them. My kids are happy, healthy, and safe. They are not broken by life. I celebrate them for the people they are and know their accomplishments are their own. I see how much I love them and want to protect them and I see how littler my parents did to protect me and how they actively hurt me.”

“After I was diagnosed Bipolar II I had to come to terms with the fact that I will take medication everyday for the rest of my life.

It’s been nearly 23 years now, and it has allowed me to lead relatively happy and healthy life, with a good job and a loving wife.”

“That love isn’t transactional. You can’t make someone love you by contorting yourself to be what they say they want or by giving everything even when you have nothing.

I was raised to think love had to be earned, and, as f**ked up as that is, I liked it bcz it gave me control, like, I could make ppl love me. Then I grew up. It doesn’t feel great realizing other ppl will either love you or not, but it’s helped me find better boundaries in terms of my own identity.

“That working hard and be dedicated to your job does not mean you’ll advance.

Hard to accept, but ass kissing and backstabbing others trumps a decade of hard work and “playing fair”.”

This one was hit me heavy in my life. Went through a divorce and realized that the only person who didn’t find me annoying was my daughter.

I’ve made changes and life is good now but it was a humbling few years.”

Having right on your side doesn’t mean you’ll have the support you need.”

“Work. And that even if you give it all up and lived off the grid to exit the rat race, it’s still a f**k load of work just to stay alive every day.

Being human is taxing.”

17. Being alive is expensive.

“I was at the grocery store tonight to grab a few things, watching the prices of things go up by dollars instead of cents over the past 2 years is seriously f**king with my grip on life as a whole.

I can’t afford s**t and will continue to afford less and less s**t, probably until the day I d**.”

“That I’m unmotivated to do anything.

I don’t have personal desires and/or dreams. I’m only living for the sake of others, I feel it would be selfish to just “go.””

“That my cancer is incurable and aggressive, and that I’m probably not even going to live to see my kids grow up and start their adult lives.

“I’ve never had a family and barely had a home when I was young and will never have either.

Just fighting super hard to not drown and be thrown out into the streets until a medical or financial accident happens then it’s lights out.”

“You can’t save someone from themselves.

“All my friends were friends of proximity.

When we are together, we spend a lot of time doing things, and will have regular catchups.

As soon as we lost contact for a time, they made no attempt to get in touch with me, and my contact details have been the same for decades.”

“My mental illness does not have a point where it gets “better” and I don’t have to suffer or struggle.

There are moments when life is worth living, but they are fleeting.”

Life doesn’t give you enough budget for them.

Lost a family member? Can’t mourn. Got traumatized? Can’t deal with it. Ended a relationship? Can’t think about it.

Got angry at something? Can’t vent. Got depression repressed?

Can’t let it all out. Want entertainment? Go to sleep once you are done with responsibilities.”

How would you answer this question?