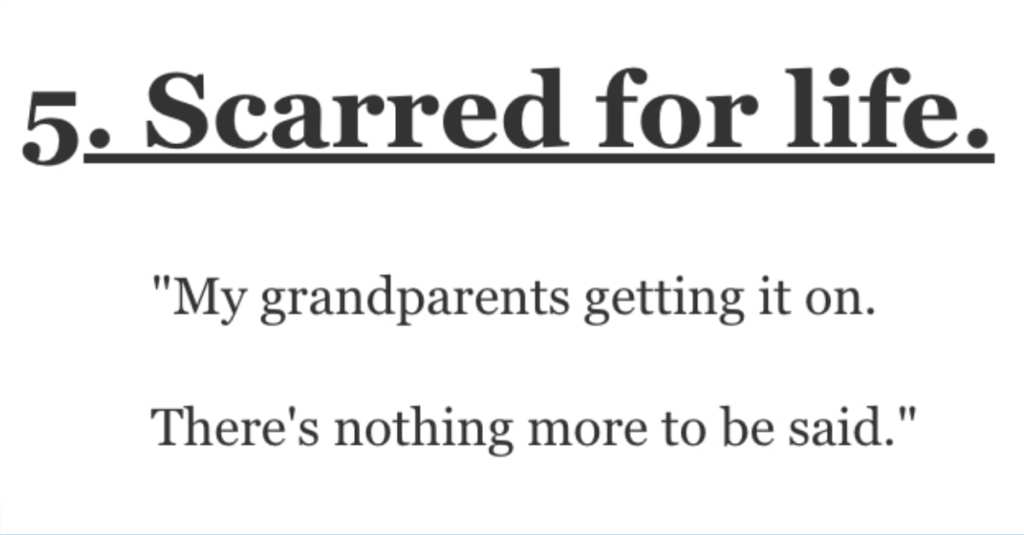 What Did You Witness as a Child That Still Haunts You Today? People Responded.

Some scars from childhood never heal.

AskReddit users opened up about what they witnessed as kids that still haunts them.

Let’s take a look at their stories.

“My father met my mother when she was very young in a foreign country.

Due to age difference (he was 40, she was 25) they would argue a lot, my mom being young, she wanted to go out a lot and live her life. I walked up into their room once my father trying to suffocate my mother with a pillow. I was around 6 years old.

When my father saw me he completely stopped (he loved me so much despite the problems with my mother), and jumped in to hug me and took me to the other room. She called the police and put a restriction order on him.

To this day my mother says I saved her life, but that image has never left.”

“I was about six at a party at my dad’s secretary’s house.

He thought it’d be funny to throw me (fully clothed and unable to swim at the time) into the pool and laugh at me in front of everyone. I was so humiliated and embarrassed that my own father would use me as a prop to make his moron friends laugh.

I later found out he was f**king his secretary on the side and is the father of her daughters.”

“My mom is a very strict person when it comes to school so when we do bad we get punished heavily.

I remember multiple times when my sister would get an F and would get beaten and yelled at. I still remember the guttural screams of pain when she got hit. I had many sleepless nights of overhearing my sister sobbing and screaming because of my mom.

Happened so much that I got desensitized to it.”

“Overheard our dad say to our stepmother, “if I could go back in time and never have those kids I would do, so I could only have your children”.”

“My grandparents getting it on.

There’s nothing more to be said.”

“Being called a “Useless, useless evil child that only gets his siblings in trouble. So weak and frail and useless.”

My Baba said this about me to my Auntie.

It sounds harsher in Russian.”

“When I was in 3rd grade, my class took a field trip to a history museum in the capital of the state I lived in at the time.

After the tours were over and we had eaten lunch, we piled onto the buses and started to leave. To put it nicely, the capital wasn’t a very nice place, high crime rate, bad roads, worn down houses, that kind of stuff. Anyways, the bus was stopped at a stop light and my friend and I were playing the alphabet game, so we were naturally looking outside the window at the time.

Should’ve just slept the way back, because we saw a guy get mugged and s**bbed right at the crosswalk. Parents and teachers started to freak out, one parent vomited, the bus driver just floored it out of there. Kinda screwed everything up at the school for the next few weeks, the word got out real fast and we had to have an assembly about it.

Occasionally still have nightmares about the whole thing, never found out if the guy ever got medical attention or not, so it’s possible I watched a man die when I was just a small kid. To this day I can’t drive through that city, if I have to get close to it in any way I take a different route.”

“When I was three my grandma d**d in her sleep and everyone went crazy.

I remember her boyfriend for some reason sneaking me in to see her body and then just sobbing a lot and saying I needed closure.

I wouldn’t call it bad trauma, especially compare to a lot of other things, but decades later I still remember what she, her boyfriend and the room looks like vividly and it comes up in my head sometimes without me even thinking about it.”

“I grew up near a highway with a 70 mph speed limit.

One day our dog got out of our yard and ran out onto the highway while I was helplessly trying to call it back. I’ll never forget the sight of it getting hit, going under the bumper and then bouncing between the pavement and the underside of the van. At least the driver had tried to stop.

He got out and dragged the body off the road and just looked up at me and said “he’s d**d” with a kind of half shrug. Nothing more anyone could have said or done after that”

“When I was about 6 I saw this guy dragging a kid covered in blood over a hill.

I ran inside my house panicked my dad called the cops.

Turned out the guy was mad that this kid beat up his son not sure what happened on other side of hill but he got arrested.”

“Overheard a relative angrily confronting another relative about their homemade p**n tape. as said tape was playing.

I get the shivers every time the memory invades my thoughts.”

“My grandmother calling me fat, ugly, stupid and worthless when I was about 5-6 years old.

She’d have long, mocking conversations with her husband, family and even my mother about all that was wrong with me. She never said those things directly to me, she tried avoiding talking to or even looking at me as much as she could, she just made sure I always was close enough to hear her say it.

I have a whole conga line of trauma, but those years of abuse really left a mark. She’s on her deathbed now and I’ll be popping champagne when she’s gone.

It’s “funny”, though: Around the same age, I saw at least two badly damaged bodies (pedestrians hit by a car) and a horse suddenly collapsing and dying in front of my eyes, but had absolutely no reaction to that. 25 years later I still hurt from being called ugly though.”

“Me: Imagine knowing a m**derer

Mom: I won’t tell you as you will never look at them the same.

Me: Then why did you tell me?

Decades later and I still haven’t figured out who it is.”