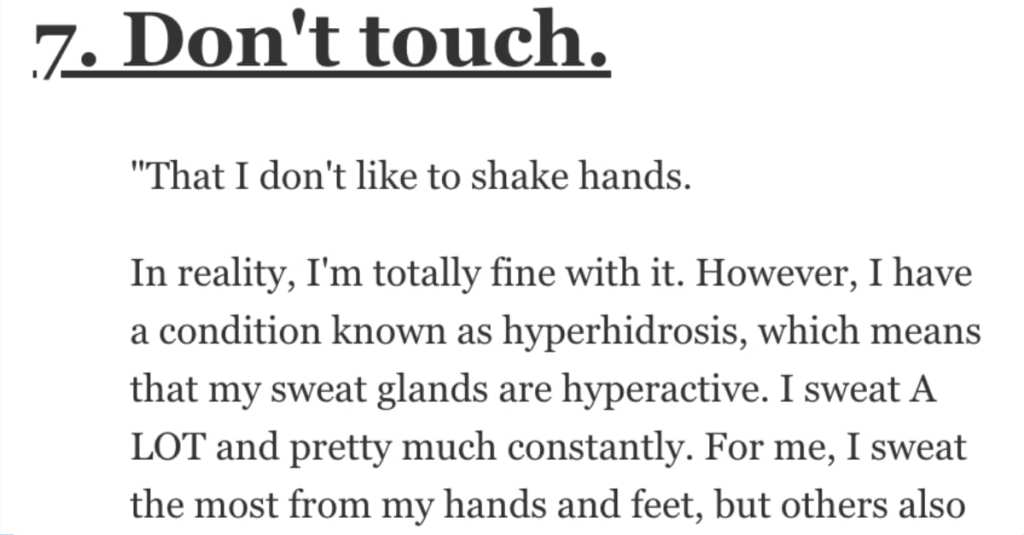 What White Lie Do You Tell People About Yourself Because the Truth Is Too Complicated? Here’s What People Had to Say.

It happens to all of us.

Someone asks us a question that is probably meant to be an icebreaker or they’re just trying to avoid awkward silence and we clam up.

Because the question asked would produce an answer that is just way too complicated and involved to even get into…so you just tell a little fib so everyone can continue on with their day and you hope it won’t come up again.

People on AskReddit admitted what little white lies they tell people because the truth is too complicated.

My wife and I are separated but get on well enough to raise our daughter but not be together emotionally or s**ually. I still live in the house and we pool our money to give our daughter the best environment we can. Oddly we fight WAY less than we did before so the environment has improved massively.

We both just have FWB or f**k buddies that we see when time permits although we have an explicit rule about introducing people to our daughter AND no banging at home if there’s a chance the other/our daughter may come back home.”

“”I have a boyfriend” instead of “We just started talking in a game and you’re asking me out. I don’t know you and now I’m creeped out”.”

Usually if I end up talking on video games and they realize I’m a girl, their conversation becomes uncomfortable or just annoying.”

“I always just say “my friend” instead of saying “my daughter’s mom” or “my ex” because the latter two give off an awkward tone in conversations.

And whatever I’m bringing up usually isn’t related to the fact that she’s in the role that she’s in, so it’s not something that really needs to be specified anyway.”

“That I am mildly allergic to garlic and onions. Technically I am Dimethyl Trisulfide and/or diallyl disulfide intolerant.

It is similar to lactose intolerance and is not an actual allergy, but that takes a fair amount of explaining.”

Easier than trying to explain the medical condition that necessitated removal of both of my Fallopian tubes. Technically I can still have kids, I’ll just never conceive them naturally.

Although if I’m having a particularly bad day, or someone won’t let it go (I’m looking at you “it’ll happen when you least expect it” lady from last week) I’ll give them my whole medical history.. usually makes people very uncomfortable, which serves them right IMO.

In reality, I’m totally fine with it. However, I have a condition known as hyperhidrosis, which means that my sweat glands are hyperactive. I sweat A LOT and pretty much constantly.

For me, I sweat the most from my hands and feet, but others also sweat heavily from their underarms. It’s not something I can control or manage easily. People who have shaken hands with me are grossed out and actively try to avoid me touching them.

So rather than tell people this and open myself up to “Ew, that’s so GROSS,” and stuff like that, I just say I don’t like physical contact.”

“I moved from the West Coast to Upstate NY.

I started a new job at a hospital and couldn’t understand what anybody said. Everyone spoke so fast. I told all coworkers and patients that I was deaf in one ear and to speak more slowly, please. And they did! Everyone was so nice and so sorry for me.

Also when people ask me how many kids do I have, I say 2. I actually have 3. My daughter d**d from cancer and I just don’t feel that I have to explain this to strangers. The important people in my life know and they’re the ones who count.”

Nothing else seafood related, just shrimp.

I have an irrational fear of them, which people always question me about. It’s just…the…way…they…curl…”

“I tell folks I’m from Texas, or if I’m in Texas, that I’m from California.

I usually say those white lies because they’re technically true, but actually I’m a refugee from a country that broke up in a civil war.

Like, other folks don’t have to tell their entire life story to a salesman in Men’s Warehouse.”

“That we dont drink because we don’t really like it.

My husband is a recovering al**holic and is nailing recovery like a bada**, but it just makes things awkward!”

“I dont have a sense of smell.

It’s easier to say that then explain what smells I can actually smell, or the fact that I cant identify smells correctly.

Example: My parents and I were looking for a new house. We walked in and I was pleasantly greeted with the strong smell of lemon pledge. My parents and boyfriend were complaining of headaches, dizziness and nausea.

I just thought it was too strong for them to handle. My mom then informed me that what I was actually smelling was cat pee.

Cinnamon smells like that generic flowery smell in women’s products

Do you ever do this?