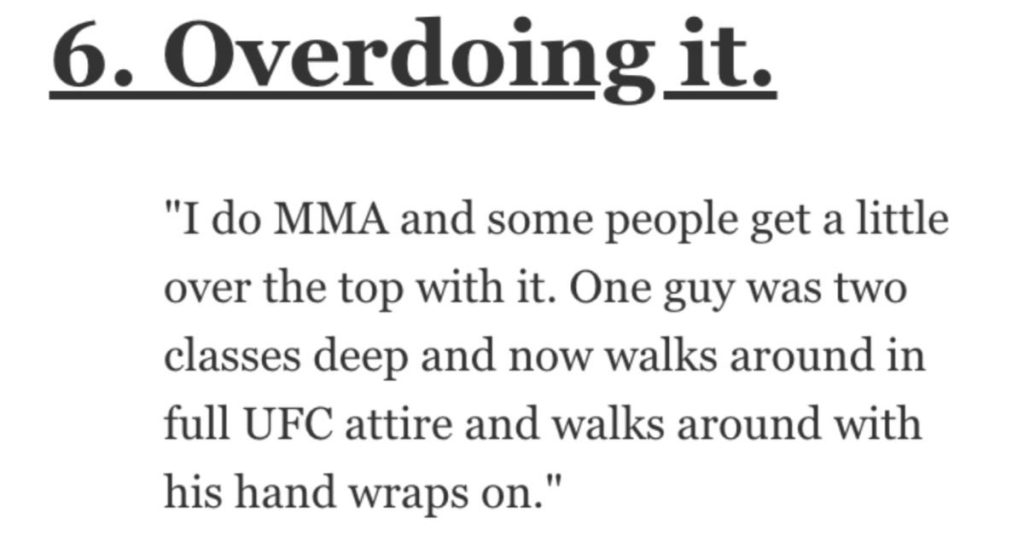 What Do People Need to Stop Making Their Only Personality Trait? Here’s What Folks Said.

No matter what kind of music you’re into, I think we can all agree that sometimes you just have to draw the line.

Yes, there are certain bands that I’ve seen quite a few times, but I talked to a guy not too long ago who has seen a certain music act 147 TIMES.

Yes, you read that right…

And I could tell by talking to him that this band was his whole personality.

You do you, but it seems kind of insane…

And, with that, let’s hear from folks on AskReddit about what they think people need to stop revolving their whole personalities around.

I knew a lot of people who made pot their basic personality.”

I didn’t get myself diagnosed until I was about 25 because so many people were saying “hahaha I’m quirky I have ADHD!!”

I’m vegan and people at work only find out when we are discussing dinner.

Veganism is important to me but it’s a volatile topic and people don’t really want to hear about the animal agriculture industry while at work or socializing.

Let’s be honest, it’s not a fun topic to discuss.”

“Having money and being wealthy.

Male or female it’s a huge turn off to brag about how you’re doing so much better than everyone else around you.”

“” The Functional Al**holic” No, you are NOT functioning.

You are exhausting, embarrassing, rude and hurting everyone around you.

It is NOT a title to be proud of.”

“I do MMA and some people get a little over the top with it.

One guy was two classes deep and now walks around in full UFC attire and walks around with his hand wraps on.”

“Making politics their only trait…

Regardless of your party, or hell, even your national identity and geopolitical stances are all ultimately useless traits unless you work in those fields, and even then, you need more traits, otherwise you’re either too boring or too much of an a**hole for people to tolerate…”

It’s been a shock dating for the first time in a while. I’ve had a guy covered in tattoos breakdown the story of every single one, and another get offended at the end of the night and say, “I can’t believe you haven’t asked about my tattoos.”

I also work with people who discuss their tattoos at least once a week. And somehow it’s the people that are covered in true pieces of art that they have spent a lot of time and money on that never mention them unless asked, but the people who have like 6 s**t tattoos won’t shut up about them. It makes no sense to me.”

For fu**k’s sake, you’re not “twisted” for bragging about laughing at a school sh**ting, you’re just desperate for attention.

Also that’s not a sign of a “dark sense of humor” as there’s no humor in it. You’re just looking to impress people.”

“Their trauma. They want to be a martyr and that s**t’s played out.

We all have baggage. Overcome it and be something great.”

“Depression. I say that even as someone that struggles with it.

Being depressed is totally understandable, but someone making it the core of their personality? That’s going to chase away pretty much every single person they talk to and I can’t blame those people at all.

Intentional or not, it’s toxic and it’s exhausting. People should talk about their depression with a therapist, not constantly use their friends as therapists. Someone expecting their friends to make that their job isn’t fair to their friends at all.

That’s especially true for the people that take it a step further and get extremely pissed off when someone finally decides to put boundaries in place. Someone trying to preserve their own mental health isn’t selfish, what’s selfish is a person with depression resenting their loved ones because their loved ones can’t devote every waking moment of their lives to helping them keep themselves together.”

“Being a contrarian on EVERYTHING.

FIL does it and it makes me want to punch him in the d**k. Your favorite football team is the 50 point favorite, they suck and they are gonna lose.

Everyone **tes this one movie? OMG it’s amazing. Game of Thrones is on an everyone loves it? “What the f**k is this nerdy bulls**t.””

I don’t care if you’re gay or whatever, but don’t make it your only personality trait.

There’s more to you than just that.”