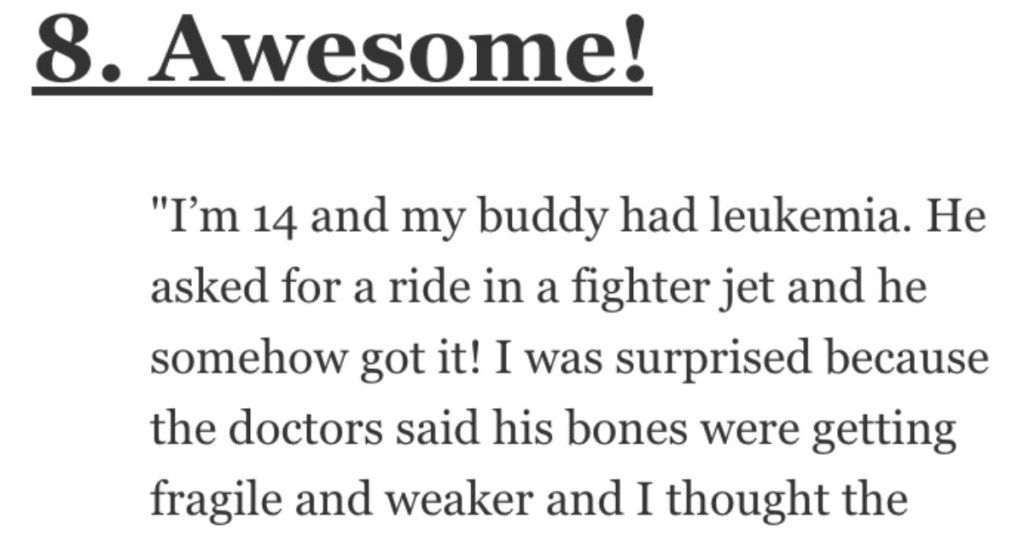 What Interesting Things Did Make-a-Wish Kids Ask for and Receive? People Shared Stories.

I guess kids who are involved in the Make-A-Wish Foundation can technically ask for whatever they want…but that doesn’t mean they’re always gonna get it, right?

But these stories…we think they’re really gonna surprise you.

Y’all ready for this?

What weird things have Make-A-Wish kids asked for and they actually got it?

AskReddit users filled us in.

“Some of them were so extravagant and amazing.

Family vacations, celebrity meetings. And then I saw a 3 year old who wished for a banana split for breakfast.

And that’s what they gave him.

“My daughter was a Make A Wish kid. She asked to go to Australia to meet the Wiggles. Unfortunately, she wasn’t able to travel that far (we live in the US) health wise.

She made a second wish, to meet Captain America. We never told Cap that he was a back up wish after the Wiggles were a no-go.”

He got a tail and swam in the giant tank with other mermaids at the aquarium.”

Got a limo ride to the mall.. red carpet entrance with cheering fans, signed autographs, shopping spree for clothes.

“I was a chef at a fancy steakhouse in Jacksonville Florida.

One day my proprietor came to me and said this is Stacy the new girl she’ll be training with you. I look over and it’s this adorable little girl in bright pink chef coat. I babysat my little cousins at the time. .So I was actually pretty used to entertaining 10 year old girls at the time.

So I showed her the ropes, we made all kinds of stuff, that were on the surface kind of random, candied bacon, cornbread, prosciutto wrapped Boursin cheese stuffed asparagus, a sweet tea brined pork chop, a sorel garnish salad type thing and some other Cool garnishes.

We were having fun, I then made a purée out of the cornbread let her plate up the dish a few different ways to show how you can play with ingredients and height to showcase differnt parts of the dish. She had a blast. It was only at the end when the father came up to me In tears that I realized what was goin on. In the moment I was a little upset because nobody told me.

But I realized after it was for the best. I probably would not have been as bright and vibrant with the “lessons” had I of known. But it was a fulfilling experience for sure.

I hope their family is doing well. I have re worked and re ran the dish as a special a few times in memory of that day, it was that impactful.”

“To be Robin (not Batman.. he said he wasn’t ready for that).

Went on an epic adventure fighting crime with Batman.”

“I worked at a hospice and we had a wishing program. One of our patients, 24 year old with brain cancer, wanted to hold a sloth. Apparently, sloths are very nervous creatures, so it’s a little tricky to actually hold one.

I found a local company that does visits to schools and whatnot who had a sloth. Sloths only poop about once a week and the sloth could only travel the day after he p**ped (because they get nervous, any longer than that and the sloth has stress diarrhea).

So basically, we had to wait until the sloth pooped and then set up the visit for the next day. The sloth p**ped on Thanksgiving, so we set up the visit for the next morning. The patient was able to hold and pet a very sweet sloth. The patient d**d about three weeks later, and I am very happy I was able to help give her some joy in her final weeks.”

He asked for a ride in a fighter jet and he somehow got it! I was surprised because the doctors said his bones were getting fragile and weaker and I thought the G force of the jet would hurt him, but he was fine and had a blast.

He’s doing better now and is scheduled out in about 3 months.”

“To play football with “the red team”.

No pro or college preference – just had to be red.

USC made it happen.”

“I worked at a LEGO retail store in the 2000s and Make-A-Wish approached us for a child with terminal Osteosarcoma who wanted to be in the store for a day.

LEGO unfortunately denied the request (which surprised myself and the rest of the staff because LEGO was a pretty great company). Staff decided to honor the request ourselves. We closed the store early on a Sunday, then invited the kid and family in.

He had a full run of the store, we collectively paid for like $1000 worth of toys for him to take home, and just spent the entire evening building w/e he wanted. He d**d a few months later.”

“When my sister was 5 and I was 8, she had cancer and had the opportunity to make a wish.

When our mom and the make-a-wish person sat down with her, they told her she could wish for whatever she wanted.

After some strong encouragement to think bigger, and the make-a-wish person suggesting Disneyland, she chose to go to Disneyland.”

“I helped host a visit to a planetarium by a kid whose wish was to go to the moon.

The front office folks thought I could just give her a personal tour of the planetarium and show her some nice high-resolution visuals, but I thought she deserved better than that.

I commissioned a jeweler friend and meteorite enthusiast to make a silver crescent moon necklace, which he graciously donated to the cause, and I donated a small lunar meteorite from my own collection. It was a gorgeous necklace very much to the credit of my friend’s artistry and generosity.

We couldn’t take her to the moon so we gave it to her instead. She was thrilled, but later said her real highlight of the trip was the astronaut ice cream. Ah, kids.”

Do you have any weird stories to add to this conversation?