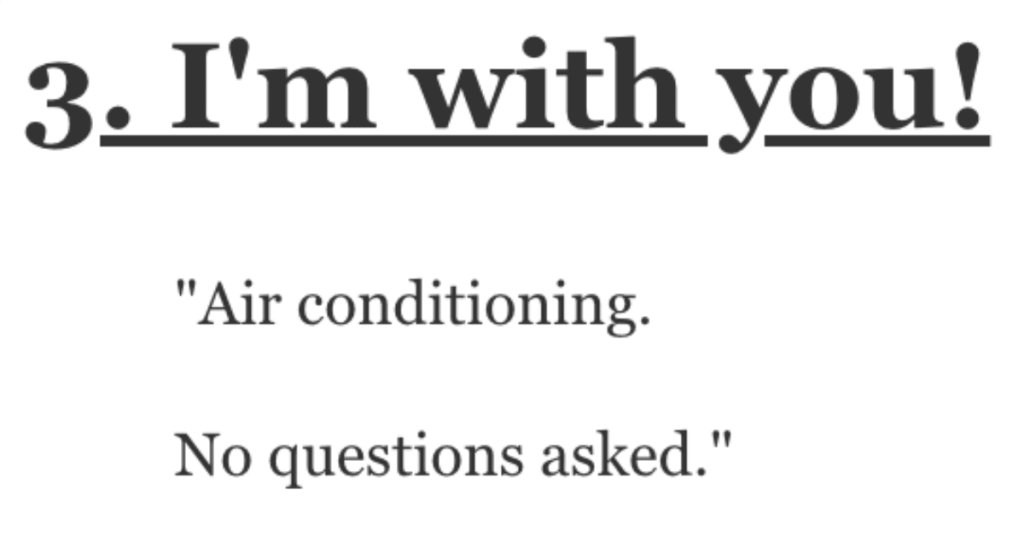 What Is the Greatest Invention of All Time? Here’s What People Said.

Flying across the country is great and so is medicine and all that jazz, but I gotta say that AIR CONDITIONING is the greatest human invention of all time…

What do you think is the greatest human invention?

Here’s what folks on AskReddit had to say.

“Agriculture and farming tech in general.

Not everyone is aware of the amount of extremely high quality food we can produce through modern farming.

300 years ago the produce we have for the cheap every single day at the supermarket wouldn’t even have been available once at the table of the richest kings of the world.”

It’s why we no longer have wars between major countries.

It may sound ridiculous but we’re currently living in the most peaceful era in human history, since the end of WWII.

Being able to communicate complex ideas between individuals and generations is the first thing that separates us from other animals, and permitted the development of complex culture.”

The ability to transport large quantities of water, and consume them quickly without spilling is, in my opinion, the factor that differentiated us from other beings. Ever get too little water? Massive headache.

Our brains need water to thrive at the levels that we use them. Without a vessel, like a cup or bowl, we would be drinking out of streams or pools of water, both inefficient mechanisms.

Ever seen a dog drink? Splashes everywhere and takes a (relatively) long time when compared to a human chugging from a glass.

“Storytelling/mythology/Archetypes that pass morals and guidelines down through the generations and build societal structures/nations for humanity to flourish.”

Mess around with some genes and just… eliminate famine, essentially?

No longer were we to be food for the animals, but the animals food for us. They have carried us through the ages from spears, to arrows, bullets, pencils, syringes. All used to propel humanity forward. Be it through wars, writing, art, or medicine. The pointy stick has held us through.

In 1969, we strapped 3 men to the top of the greatest pointy stick ever devised, and with the best throwing technically ever convinced. We sent them to the moon.

May the pointy stick be with us now, and into the future.”

You never realize it’s value until you lose it.

Texan here- that snow storm made me realize how difficult it is without electricity.”

“Written language. The ability to accurately pass down knowledge.

Anyone who has played the telephone game knows that oral stories are easily altered.”

I truly appreciate not having to d** from smallpox or an infected blister or a cracked tooth.

It blows my mind when I think about how recent a development this is in the span of modern human existence.”

We defied evolutionary biology and made physics our b**ch.”

Spend a few weeks without it and you see how important it is.”

For my money, this is it. For the first time, the rapid distribution of knowledge and information could be achieved.

And those who did not adopt the printing press at it’s inception, still have not recovered.”

Nearly every human achievement and aspect of how we live modern life stands in some way on its shoulders.”

I (and millions of others) would be so screwed without them.

And the next step….lasik!!! Best decision I ever made!”

It gave us the ability to better understand and define our universe.

Not to mention almost everything humans invent and create requires math.”

The sanitary sewer has done so much to improve human life and health.”

“I would argue that the Internet, allowing for nigh instant communication and sharing of information to the vast majority of the inhabited globe has done more for the development of modern technologies than one could ever possibly grasp.”

Just soap has saved more lives than any other invention.”

People talk of ‘the best thing since sliced bread’, or ‘the greatest invention since the wheel…

The Pizza Cutter is a wheel – that slices bread.”

“As a type one diabetic I’d have to say insulin.

23. Think of the possibilities.

With a controlled heat source, many things became possible.”

It’s a known fact the brewing of beer is actually what made it so humans could build large cities. Before brewing beer and making al**hol, water born illnesses were a major problem.

But of course after you make water al**holic, or brew something, it k**ls all of the bacteria or whatever in water that would get you sick.

Civilizations were literally built on al**hol, it was the only method they had to sterilize water, before modern times and methods.”

I mean, we didn’t invent them, in the way that we’ve invented modern domestic pigs, cows, chickens etc, but the archaeology proves that we’ve been co-evolving with them for almost as long as we’ve been human, so in a very significant way we invented them while they also invented us.

Canis domesticus wouldn’t exist without humans, and while wild ancestral canids would be fine without us, adapting to live alongside canis domesticus is likely one of the best things we ever did and vice versa.

Got a dwelling (cave) that’ll still be yours if you go out hunter-gathering because you have a loyal friend to guard it? Thank a dog. Got a herd of domesticated animals that won’t just wander off, so you can get meat, milk, wool and leather? Thank a dog.

Or maybe you’re fully vegan and know you can survive the winter because mice and bunnies haven’t eaten your vegetable patch/orchard harvest/grain store? Again, that’s thanks to millennia of good bois and girls, just choosing to hang out with humans.

And yes, contemporary dog-fashion is an obscenity and a sin, and no we haven’t always treated our best mammalian friends well. But seriously. One of my great hopes for humanity is that one day, maybe, we can evolve to be good enough to deserve them.”

What do you think is the greatest invention ever?