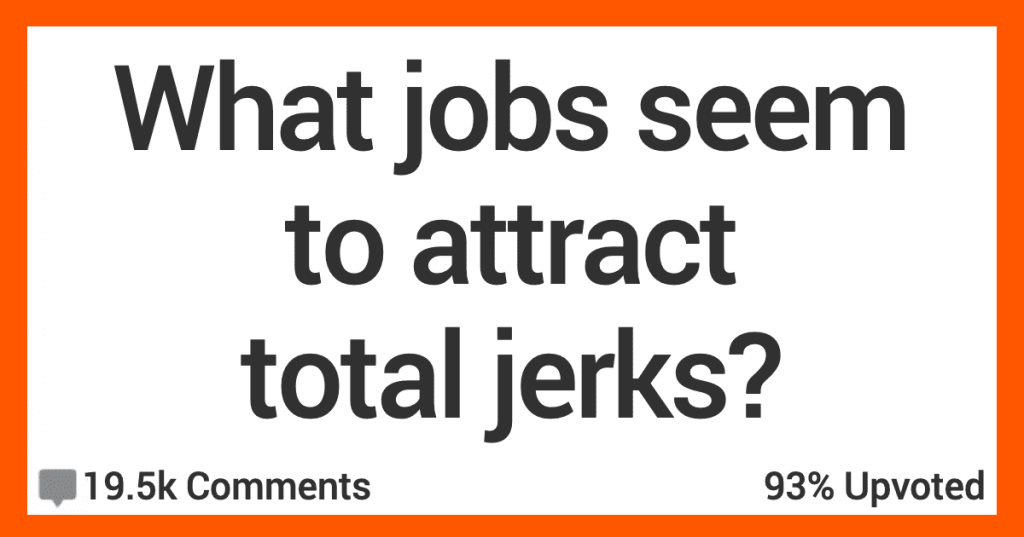 Some stereotypes exist for a reason…and some people in certain professions are known for being a**holes because, well, they are…

And today we’re going to hear from AskReddit users about this.

My Uncle has a boat dealership.

And his two sons that run it with him, too.”

Every single one seems to have this massive ego and self importance and I can’t work out why.”

“You will never meet a person you’ll h**e more than a Club Promoter.

It’s everything left over from the dregs of d**chebag guys that think they are “the coolest” and spend their 40s buying drinks for their 20-something “friends”.”

“President of an HOA.

Never been in an HOA where the President wasn’t completely nuts or doing something unethical.

First HOA was the least offensive. But the entire street paid out of pocket monthly to contribute to the upkeep of the hill we all lived on. Twice a year the HOA would hire someone to come through and mow the grass… Realized when I got older that the amount of money they got could have paid to have it done monthly if not more… So a shit ton of money just up and disappeared.

Second HOA was insane. Got told I couldn’t park my Baja on the street because it was a ‘truck’. Why were trucks bad? Because only the ‘help’ used trucks. (I wish I was joking.) Was told I had to immediately park it in the garage, not even in the driveway, or we’d be fined.

The kicker? There was a huge Dodge Ram across the street that was parked on the street year round. Never heard of them getting so much as a complaint, let alone threats of a fine. Even though it was an actual truck while my Baja was basically a converted Outback.

That same HOA recently threatened family friends of ours because they bought a house with a red door. Five months passed without so much of a hint of displeasure from the HOA and Google Street View and Zillow showed that the door had been red for years. Then suddenly the red door was a violation, had always been one, and needed to be changed to black.

Our current one had a member that would walk up and down the street looking for violations. He was such an asshole he tried to sue the city to prevent needed construction downtown because it would ‘ruin his view’ from his hill top home. We’re pretty sure he retired and now a new bunch of assholes has replaced him.

One of whom is threatening us with daily fines if we magically don’t fix our front yard that the drought killed… Yet when we offer plans to rebuild it in a drought friendly manner they all get rejected. :).”

Give a weak human a minuscule amount of authority and they act like a wannabe dictator and power figure.”

“People in the military.

I am a retired Air Force vet.

My brother worked for TSA for years, and he is one of the biggest a**holes I know.

He thinks he’s superior to everyone.”

I worked a for a real estate agent for about six months. Dude thought he was f**king infallible, but was likely the worst manager I’ve ever had. Highlights include:

His training skills were utter garbage. He’d b**ch at me whenever I’d ask questions or try to figure out where he was going with something and to see if I was grasping it.

I wasn’t an agent. He didn’t like me joining in on conversations he and other real estate agents were having because… no reason other than I wasn’t “at their level” yet (and a little bit of it definitely came off as he thought men were superior to women, but that’s just a hunch).

He always needed a “yes” or a “no” about things he’d never bother to inform me of. An example: “does this person know we’re coming over to do maintenance?” “As far as I know, but I’m not sure”. “I NEED EITHER A YES OR A F**KING NO”.

My favorite, though? Instead of communicating like an adult, he’d teach me “lessons”. I wouldn’t be told how to do something/what to do, so instead of saying, “hey, just so you know for the future, it’s xyz”, it would be, “hey, do me a favor. Do x and tell me what happens”. That’s how I would learn things.

Just really passive aggressive, out to find some way to embarrass, pompous, and full of himself.”

I am a salesman, there is nothing more painful than attending a work conference full of highly driven sales people devoid of personality.

It’s sales, it’s all about drive and providing solutions, but it doesn’t have to be your whole reason for being. Sometimes it’s ok to sell people what they need not what you think they can afford.”

I live in a place where a good chunk of pro photographers reside (who do this as their only job), and hoo boy I have never seen a crowd of people more snooty and elitist than them.

Joined up with a local photog group for hobbyists and they ended up finding it, joining it, and beginning to judge people for using entry-level DSLRs or phone cameras, calling it “not real photography”.

Really k**led my passion in that field because they always made me feel not good enough. Even when I was able to finally afford a good camera, I never used it just because I was so over it at that point.”

The answer is General Attorney.”

My patients rely on me to make decisions, prescribe medication and perform procedures to the best of my abilities. Health insurance executives are only concerned with profiting off human misery as much as possible.

I’m in private practice and have full time employees to jump through their hoops and even then some of them will want want to speak with me directly (after leaving me on hold for 20min) only to trip over their own words as to why my diagnosis/treatment plan isn’t “necessary” given some bulls**t rubric they came up with.

The patient thinks the doctor is ripping them off, the doctor won’t take certain certain cases depending on what insurance the patient has while the insurance companies continue to merge into larger monopsonies who help other CEOs maintain a captive workforce due to the insane cost of healthcare in America which would otherwise financially cripple 90% of the population.