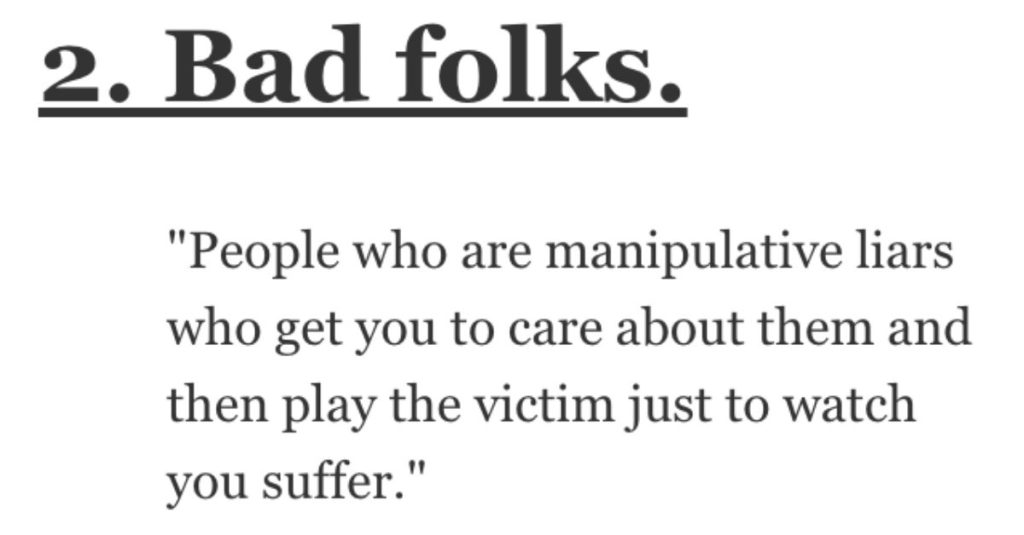 What Kind of People Are You Afraid Of? Here’s What People Said.

For the last several years, a certain type of American has risen to the surface that honestly scares the hell out of me.

They take pride in being ignorant, confrontational, and downright mean to their fellow citizens.

And it doesn’t seem like they’re going anywhere anytime soon.

That’s my opinion, at least…

Now that I shared my thoughts, let’s hear about the kinds of people that AskReddit users are afraid of.

“For me it’s people who can’t be reasoned with.

It reminds me of the cliche anecdote;

“Don’t argue with stupid people, they will drag you down to their level and beat you with experience.”

You can explain the flaws in their logic, and will somehow come up even more flawed logic to ignore it.”

“People who are manipulative liars who get you to care about them and then play the victim just to watch you suffer.”

“There is an odd category of people who seem to be able to get away with anything they do.

May it be with their looks, skills, wits, power and everything in between.

“People who can’t admit their mistakes.

This is the biggest flaw of my parents. They simply can not accept the fact they did anything wrong or hurt others, even when there is proof.

When I was in a dark place in highschool, I had to be hospitalized. I remember very clearly as we were getting of the interstate my step-dad didn’t say anything comforting, but rather “Let’s see how much money you cost us this time.”

Hearing that was like getting stabbed and twisting the knife. And he denies saying it, because he and I were the only ones in the car.”

“People with a short and unpredictable temper.

Those kinds of people who can be totally fine one second, then you do something that doesn’t even cross your mind could be “wrong” and suddenly they’re yelling at you. People who explode at seemingly random stuff, no consistency, and particularly at moments you wouldn’t expect.

That’s the worst. I’m not particularly used to being yelled at and I’m also rather non-confrontational, so I just don’t know what to do when someone does yell at me when I’m absolutely not expecting it. Those people scare the s**t out of me. I’m constantly on edge when I’m around them and I always feel like I have to walk on eggshells.”

No, you were already angry and decided on a drink whose flavor profile pairs well with aggressive behavior.”

“Be scared of the man who has nothing to lose.

“The loud and uninformed.

My girlfriend’s mother is like this. Oh my goodness to hear someone talk to a mechanic about how a car works with full confidence.”

“People who get mad at fast food cashiers.

It’s just so uncomfortable to be around them when they’re attacking someone over a simple mistake or inconvenience.”

“People that need to create a human enemy when they are facing purely random circumstances like illness, or accidents.

“Those that not only lack empathy for the weak and less fortunate, but target and prey upon them.

They’re the kind of snakes who will gut you as soon as they believe they have the upper hand and can get away with it.”

I’m planning on buying front and back facing dash cams.

I’ve had a few close calls with erratic/impatient drivers who think changing lanes every 5 seconds in heavy traffic will somehow get you to your destination faster.”