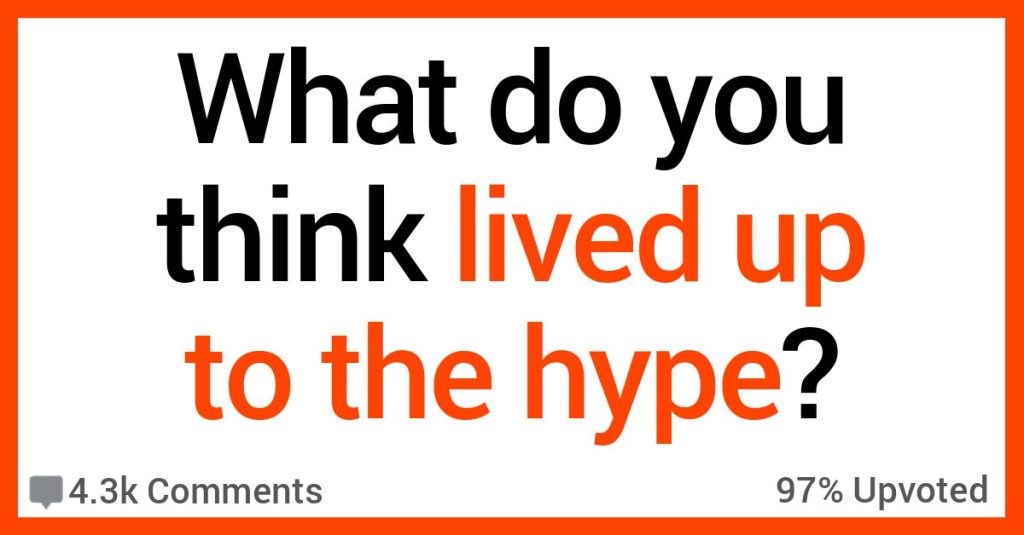 What Lived up to the Hype? Here’s What People Said.

We’re always being bombarded with advertisements about all kinds of products, movies, music, and every other thing imaginable.

But sometimes things actually DO live up to the hype…

Or at least they do according to these AskReddit users.

Read on and see if you agree with them.

My wife and I started it after EVERYONE told us to watch it when season 2 ended. Both sides of parents, friends, social media etc.

We thought it cannot be that good, it’s just too hyped. But no, it’s really is as amazing as everyone says. They really deserved all the Emmys they received.”

“Owning a puppy. It may be a lot of work but my gods it is adorable to see them grow up.

I was so happy when my golden retriever puppy was house trained enough to be able to sleep in bed with me.”

I grew up Muslim and tried bacon for the first time in my life this year.

4. Still need to watch this…

When I heard about it, I was like “oh sure, another popular Netflix show that everyone’s raving about” which made me want to dislike it. First episode I was hooked and every bit of free time I had afterwards went into finishing it.

It’s kind of funny how when something gets popular but you didn’t ride the immediate wave of popularity, your brain tries to make you dislike it.”

Saw it three times in the theater, and many more times on home video. Loved it.

I understand that others think the movie was a let down, but at the time it blew ME away, and changed the way I perceive Star Wars.”

Fully expected to be disappointed after all the hype.

7. Sometimes, you gotta do it.

It turns out the grass often is greener, especially with the way many (if not most) corporations favor new hires over current employees. Gaining years of experience in jobs where it matters will objectively increase your value, yet

It’s super common to give employees tiny marginal raises that fall short of that increase in value. When it’s time to look for a new job, companies actually have to be somewhat competitive and come a lot closer to offering your true value.

This is part of the reason why so many positions hesitate to post the salary, and why company policies usually state that you can’t discuss your salary (which is BS). They are deliberately trying to pay a chunk of their workforce less than they’re worth.”

Life was unmanageable. People kept saying to wait for the miracle. Kept telling me one day at a time.

I kept having faith that things would get better. They did. My life is incredibly better than it once was; even on my worst days.”

I remember the hype train being like no other movie I can remember. Wonderfully orchestrated media, really harnessed the internet in all the right ways. I started to think the movie was gonna be all hype and little substance.

When the Joker put the pencil through that guy’s head, it was all over for me. Within the first quarter of the movie, I was already declaring it the best super hero flick I ever saw (at the time).”

Steve Jobs said it was going to revolutionize the way we listen to music and it absolutely did.

PS. Do you remember when people were being mugged for their iPod because everyone knew you had one because of the white headphones.”

Was s**cidal as a teen but fortunately listened to the advice of “It gets better”. Hot d**n, it really does.

Got out of my small town, got to finally live life for a change outside that stifling, judgmental environment, and experience how living really does beat the alternative.”

“Parasite. See it if you haven’t.

Just recommended this to a friend! That reveal is so mind blowing and the way it perfectly weaves into the story was impossible to look away after that point. The bloody tissue scene was fantastic too, the editing and the music was absolutely perfect.

I wanna see it again soon, I’d love to see it for the first time again.”

In the early days when it stopped being solely for universities and government, people, media, etc. was unsure what to make of it and how useful it would be.”

“Smartphones. Literally the majority of people have them.

Oh god, I remember thinking how ridiculous it was to have your phone, mp3 player, and camera all in one. If you lose your mp3 player, at least you can do the other stuff.”

Just watched it again last night for the umpteenth time.

Chernobyl and Band of Brothers are near perfect.”

“The original Dune book series, was all my older brother talk about in high school and can say that while incredibly dense they really probed deep into questions on humanity and how we organize our society.

Highly recommend for all.”

Every time when an Argentine young player comes up he is hyped to be next Maradona. But many faded from half way in their career. Messi was hyped way too much in that regard from the age of 17.

Now almost at the end of his career, most of the football lovers and pundits consider him on par or above Maradona on footballing ability.”

“Alright, a movie made by Marvel, how bad could it be?””

“The Legend of Zelda: Ocarina of Time and Super Mario 64.

The first 3D entries for legendary games? I’d say they lived up to the hype.”

I remember all the advertising and training classes at work.

Turns out it had a lot of good features, including the “start” button.”

“Heelies. I saw a kid roll in with them the other day.

I’m 23 and all I could think about was how much cooler this 11 year old was than me.”

For my money, it’s the single best app that exists currently. I’m sure for someone else it’s different… but I probably use Spotify ~6 hrs every day.

Some days it’s on from the time I wake up until I go to bed. The access to virtually everything is amazing.”

“The chosen one” as a 17 year old high school student, man did he deliver. The only argument around is the MJ or Lebron one.

To even be in the discussion for GOAT is living up to the hype.”

I still remember all the great trailers set to Bobby Darin’s “Beyond the Sea” and how cool the plasmids looked and the flooded art deco aesthetic.

Then the game turned out to be even better than expected.”

At the beginning it was seen as a nice gimmicky feature, but unusable.

What do you think lived up to the hype?