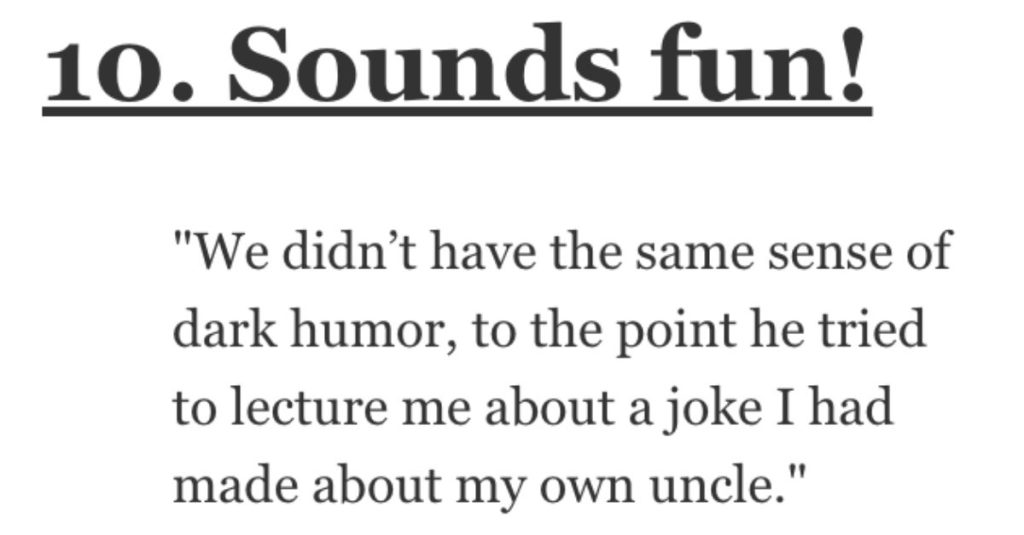 What Made You Immediately Lose Interest in a Crush? People Responded.

Let me tell you a little story, friends…

I was once really, really into a girl in college. We had a class together and I was smitten…

And then I saw her sing karaoke at a bar one night and the whole thing went down the toilet. Yes, it was that awful…

Have you ever immediately lost interest in a crush?

“When she just doesn’t respond to your messages

I felt unwanted, so I just stopped texting, and I never heard from her again.”

“I’m from Germany and we have three different kinds of high school.

I went to the first one and met a girl there who seemed amazing until she made fun of people from the other two forms of high school. Arrogance is an immediate turnoff, especially if it’s completely unsubstantiated.”

“Told me that she left her pet Guinea pig outside in its cage while she went to a music festival.

“At first I thought her daftness was somewhat endearing.

Later it dawned on me that she’s just f**king plain stupid.”

5. Avoid the crazy ones.

“She turned out to be absolutely bat s**t insane.

Just decided on our third meeting to unload with all sorts of insanity. It was a ceaseless, unrelenting rambling incoherent stream of insanity for about an hour (conspiracy theories..like all of them), then abruptly propositions me (“Are you going to f**k me or not?”) and then before I could even respond, she went right back into the avalanche of conspiracy theories.

Needless to say, I bowed out of the situation as rapidly as possible.”

“They show no interest in my general life.

Example: I tell them I’m going to the theater with my mom, then they show no interest in asking me how it was etc.

Like most guys, I worked pizza delivery in high school (when my parents allowed it) and I could kill on tips just by chatting up the customer. The best one was the 7 pizza order that ended up late because it was just too far out, so boss docked me the 20% discount and the mom dropped me a $100 tip.

Or the guy with a Pro-Am funny car under a tarp in his driveway and I asked him if he had a 6V-71 blower on it. Dude was surprised I would know (parents were industrial equipment brokers so I was a wrench turner) and dropped me a $50 tip.

So when I say I take care of food service workers, I always tip but base it on the level of service. Delivery always gets 20%.

Kid was just barely 16 when he delivered the pizzas and wings, and I was barely 20 when this happened, so I could totally relate. I paid but she didn’t tip him; I gave her the cash + tip while I was finishing up some cleaning and she pocketed the tip and said “he didn’t deserve it”.

He got the tip after I chased him down and apologized. She got the boot before eating pizza and wings.

First and last date in under 30 minutes… thanks Domino’s!”

“When she told me “you’re one of the good foreigners” and “as an Austrian, you’re practically German anyway.”

She was German; this was in Germany.”

“We were hanging out for a long time, she already told me she had strong feelings for me and proceeded to send me a snapchat of her having s** with a mutual friend of ours. Needless to say, I’ve lost my interest.

Later she said it was just a prank and the guy had bought her a bottle of wine. I’m not the one to s**t shame, but it wasn’t right.

“We didn’t have the same sense of dark humor, to the point he tried to lecture me about a joke I had made about my own uncle.

“They had zero motivation to progress in life.

Put me off as this is something they specifically complained about and had ample opportunity to knuckle down and bring about the change they desired. But no.

Instead it was just sulking all the time. I am the polar opposite. So it just made me feel depressed. Lovely person, better suited to someone else.”

“Watched him laugh and really get excited when a dog was getting shocked (one of those shock collars).

He enjoyed that way too much and wanted to encourage the dog to go outside the boundary. Fortunately, the owner wouldn’t let him.

I completely wrote him off that day.”

What made you lose interest in a crush?