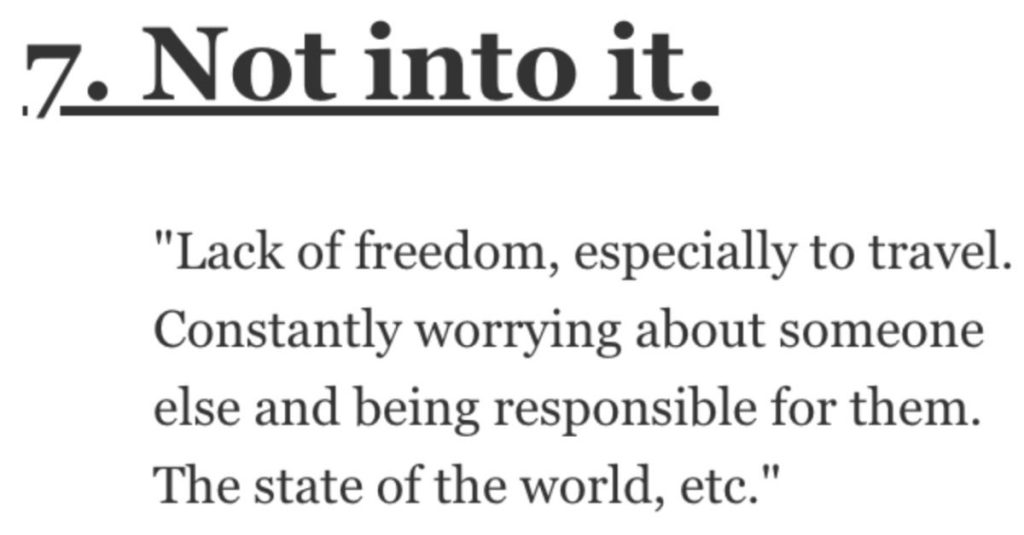 What Made You Not Want to Have Kids? Here’s What People Said.

If I’m being completely honest, I think I knew from a pretty young age that I’d never have kids.

And I know that I’m not alone!

Let’s hear from AskReddit users about what made them not want to have kids.

They make their lives sound like hell but then always top it with “oh but it’s the best thing ever and so worth it.”

“Why people aren’t terrified of pregnancy?

To me the idea of carrying a growing living being in my belly seems like a nightmare.”

“I have no desire.

I like having a clean house at all times.

“If I can’t afford a house, what makes you think I can afford a child?

The economy is a dumpster fire.”

“Of all people, it was Seth Rogan who finally put this together for me.

“I don’t know anyone who gets as much happiness out of their kids as we get out of our non-kids,” Rogen told Howard Stern. “Like, we’re f—ing psyched all the time! We’re laying in bed on Saturday mornings s**king weed, watching movies naked. If we had kids, we could not be f—ing doing this.”

Howard Stern pointed out that when you’re a parent, the kids are the priority, to which Rogen responded: “I don’t want that. That does not sound fun to me.””

“I get 8 hours of sleep most nights and I travel multiple times per year.

There’s no way I’m ever giving that up to raise children.”

“Lack of freedom, especially to travel.

Constantly worrying about someone else and being responsible for them. The state of the world. My own mental health stuff that can be genetic, knowing pregnancy is incredibly dangerous.

Having 4 friends very recently have their first children and seeing them miserable, the idea of forever being a mom. It’s all overwhelming.”

8. Learned from the past.

“I saw how much strain i put on my parents financially by just existing.

My childhood was horrible and I don’t want to put another child thru that.”

“My family ask me and my wife about this all the time. The best way I’ve found to explain it is to ask them why they don’t own horses: “They’re impractical expensive, require constant attention, I’d probably have to relocate, why would i want one in the first place, etc’. The exact same arguments apply.”

Having to actually look after them.

Not having anyone to have kids with.”

“I can’t get pregnant and know I’m not ready to be a parent yet.

Can’t be a good influence for a young one if I’m still occasionally f**king up with drugs, self harming, and not doing well.

That stuff emotionally transfers to the kid and isn’t conducive to a healthy environment for growth.”

“Was raised in a religion that told me the only purpose in life was to raise a family.

Then I was a**sed by a church leader and decided I don’t want any potential kids that would have to deal with me and all of my baggage despite therapy and medications improving my life the past year or so.”

Why do you not have kids?