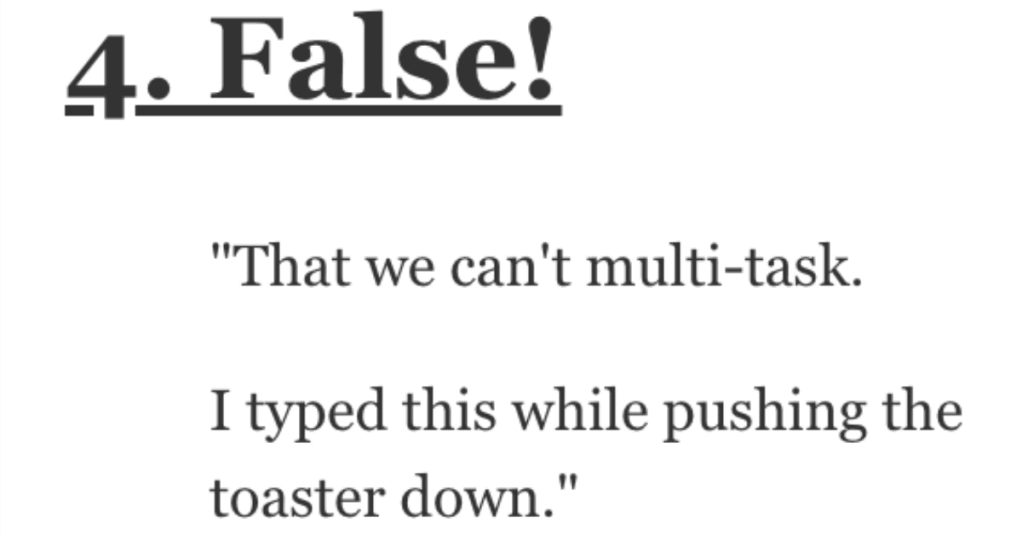 What Myths About Men Are 100% False? Here’s What People Said.

There’s a whole lot of speculation, rumors, and myths out there about men AND women, as I’m sure you’re well aware of…

And a lot of the stuff isn’t true…at all.

AskReddit users talked about what myths about men they think are totally false.

Let’s have a look, shall we?

“”No I’m not going to hurt this child im talking to, im giving them a few spare dollars trying to be nice”.

I’ve had to say this more than once,.

Big dudes can talk to kids without trying to kidnap them. Kinda hurts my feelings.”

Ain’t nobody got time for that.”

“That we can’t multi-task.

I typed this while pushing the toaster down.”

“That we get e**ctions on purpose.

90% of the time we dont mean to and we have almost no control over it.”

“That height or feet size correspond with d**k size.

Sorry friends, everything is a mixed bag.

Being pleasantly surprised is the key.”

“My crush’s dad likes to tell her that all I think about is s** and food and I only want to date for s**.

I want someone to cuddle and love I don’t care about the s**.

It’s nice but I’d rather have a healthy relationship with a girl I love.”

“That men don’t have body-image issues.

Every man I know, from middle school to middle age, has issues with their body. Maybe he’s convinced he’s not tall enough. Maybe it’s his weight. Maybe he thinks his d**k is too small. Maybe he h**es his body hair.

Yet, for some reason, society at large seems to think that men who are worried about some aspect of their body are either 1) nonexistent or 2) whiny little b**ches.

Body image and insecurity is not solely the purview of women. To make it worse, there are so many wonderful movements to help women move past their insecurities. We have ad campaigns like Dove’s “True Beauty” campaign, which showed off women of all shapes, sizes, ages, and colors.

Men, on the other hand, are quite often told by other men that we need to shut the f**k up. I don’t see the same support by men for men that I see by women for women.”

My friends and I have never gone beyond confirming that the act took place.

In my experience, women are more likely to drastically over share private information.”

“That we’re all s**ually monolithic.

I’ve had women try things with me during s**, where I said “don’t do that, I don’t like it,” only to have her respond “what do you mean? All men like that.”

“That we’re all emotionless or emotionally inaccessible.

Also that we don’t cry to express suffering.”

“That we have our legs spread apart to show dominance or something.

Listen, if you had your entire reproductive system hanging outside of your body in a sack of skin between your legs, would you like that to be squished by smashing your legs together?

“That men think about s** once every 7 seconds

How would we get anything done?”

What myths about men do you think are 100% false?