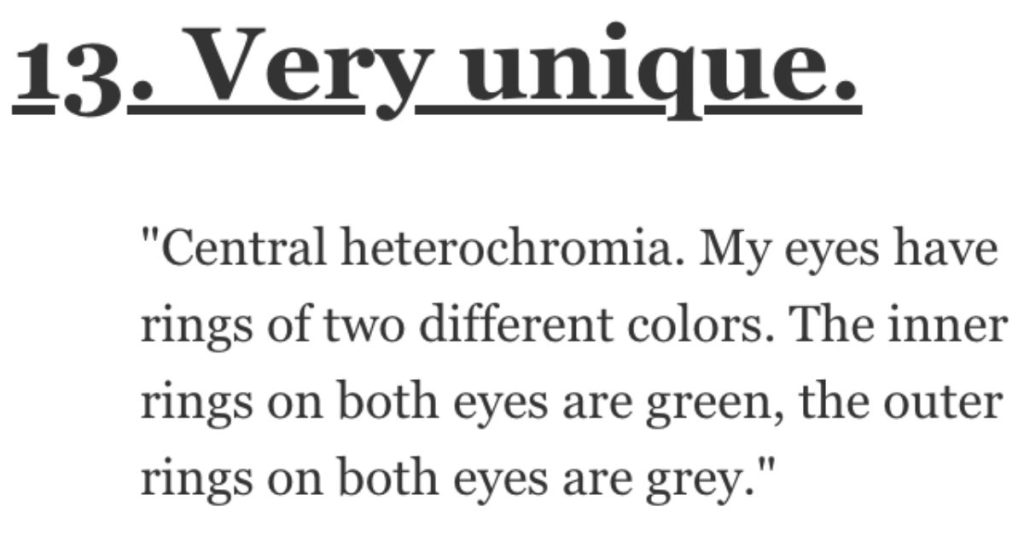 What Odd Quirk Does Your Body Have? Here’s What People Said.

Most of us have some odd quirks with our bodies.

Some of us have webbed toes and others have birthmarks that look like Elvis.

But they’re all unique in special in their own way…and also kind of weird.

Let’s get weird with some folks on AskReddit.

“My left leg gets cold depending on how stressed I am.

Not physically, but psychologically, like the cold is coming from inside my bones.”

It’s some sort of genetic issue from my mother’s side (inbred aristocrats ffs) where my body doesn’t stop producing adrenaline. This is exhausting as is (it’s like having the down you get from adrenaline permanently) but it also prevents me from sleeping

. I almost died to sleep deprivation because of it which is a horrific experience in every sense of the word. On a daily basis now that I have lots of medication to treat it, it has an annoying downside RE pain tolerance.

My eyes have rings of two different colors.

“I also have natural noise cancellation.

I can make my ears make a whooshing sound that blocks out most noise.”

“There’s a spot under my chin which, when touched, makes me start hiccuping.

It makes showering and shaving/trimming my beard rather interesting.”

“When the barometer changes my body reacts.

If it goes up I’m extremely tired, if it goes down I get a bit grumpy (not sure why, maybe something physical is happening that I can’t pinpoint).

My husband loves it because I basically predict weather.”

“I can move my eyeballs left to right in such high speed, it looks like they’re vibrating”

“My eyes feel strange when I eat something really sweet.

I don’t know how to describe it but it kind of feels like I want to rub them? Or put pressure on them?

My sister jokes I don’t have a sweet tooth, I’ve got a sweet eye.”

“My thumbs and big toes are double jointed.

I can bend my thumbs completely backwards and use my big toes like little monkey hands.”

I don’t have small feet. I have tiny feet.”

“I sleep with my eyes wide open. Always have.

There’s a picture of me asleep on my grandparents couch when I’m about 3, and the caption just says “she’s not dead- 1998.”

Always a fun conversation to have with a new boyfriend.”

“I can crack the right side of my jaw at will like a wet, bony sounding whip by just tensing up the muscles involved and moving it to the left.

Doesn’t work for the other side.

It’s a cool trick in case I feel my friends haven’t been grossed out enough. I love getting people’s reaction to that.

Also instead of brain freezes, I get lung freezes.”

13. Those are some loooong arms.

So I can touch my knees while standing completely upright.”

“I have internal Snapping Hip Syndrome.

Means my tendons roll over my hip joints painfully and make an awful sound in the process.”

“I can blur my vision at will.

Apparently some people can and some can’t. Means we can see those 3D eye puzzles immediately by just changing our vision. Has something to do with depth of focus.

Also great for watching horror movies or graphic scenes. Looks like I’m watching but everything is blurred. It’s like a visual censor switch.”

“My spine is about 2 inches to the left of where it should be in my lower back.

“I only sweat on one side of my face and have a green eye and a blue one.

It’s called Horner’s syndrome, had it since birth.”

Ever since shortly after I eat I peel off a series of strong sneezes.

“I can spread all of my toes out really far from each other, with none of them touching at all.

It sounds insignificant, but every person I show ends up giving me a big reaction.”

“My eyes are not level.

“My head is tilted to the right (by default lol not that I can’t tilt it to the other side, it’s just my normal resting position).

My parents told me that’s how it’s been since I was a baby. No problems with bones or muscles as they’ve had it checked for years.

Doctors say it might be caused by a muscle in my eye which makes me tilt my head to see lines as straight.

I’ve never met anyone with the same case.”

“I was born with an extra thumb on my right hand.

Unfortunately it was removed because it wasn’t functional and hindered the other thumb, but the remaining thumb is very strangely shaped and has a gnarly scar.

“I can eat anything I want and I don’t really seem to gain weight or get fat.

I’m almost 40, still eating donuts and pizza whenever I want, still crushing bags of candies and chips every night and still have a 6 pack and look better now than I did when I was in the gym 4-5 days a week in my 20’s. My body seems to have learned how to process junk food like it’s clean protein.

People think it’s odd and make comments about it pretty often when they see me eat. I get a kick out of their confusion and curiosity. My BIL’s professional medical opinion is that I have a false leg.

All my blood work comes back great on an annual basis too.”

Wipe out on skateboard and get nasty, deep scrapes? Gone with a scar in a week or two.

Cut my finger? Fold the skin back over, don’t touch it, healed overnight”

“I was born without a uvula and I can spit out of my nose through a hole in the front of my mouth.”

“I aggressively sneeze during and after every hot shower for at least 45 minutes straight.

“All of my joints crack, pop and grind.

I sound like a glowstick all the time, especially if I’ve been sitting for more than ten minutes.”

“I have really good eyesight in the dark, like I couldn’t read a book in pitch darkness but I could see stuff.

It p*sses my fiancée off as I’ll walk into a room at night and everything’s pretty much visible so I don’t turn a light on.

If we’re going to bed and I do this she then follows expecting me to have turned the lamp on but nope because I think it’s pretty light still and then she ends up tripping over something because apparently it’s really dark ?”

“I can sleep while standing up.

I found this out during a summer bridge program I went to the summer before I started college. The counselors told us to stand up in the back if we ever got tired during class.

Little did I know just how tired I was going to get.”

Does your body have any odd quirks?