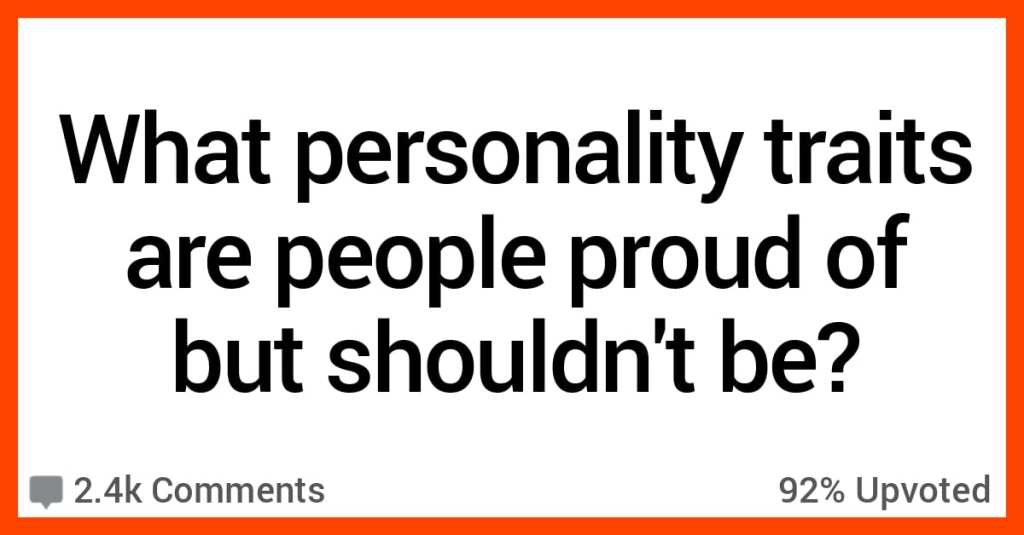 What Personality Traits Are People Proud Of That They Shouldn’t Be? Here’s What People Said.

It’s kind of funny what people like to brag about.

Whenever I hear someone say, “‘I’m brutally honest”, my immediate reaction is, maybe you’re just a total a**hole?

But, I guess everyone out there is different, right?

What personality traits do you think people are proud of that they really shouldn’t be?

“Being ‘tough’ and threatening or intimidating to others to be ‘cool’ or ‘funny’.

“Have a friend who is proud of her ability to talk over others in a conversation until they give up and let her dominate the conversation from then on.

Extremely rude and annoying, but she has a very charitable spirit and I wouldn’t trade her friendship for the world.”

“People who describe themselves as weird are not really weird and just pretending to be, believing maybe that it makes them cool.”

4. You call that leading?

People who are proud of that are annoying.”

“Being bad at and hating “small talk.”

It’s fine not to like it, but bragging about hating it and being bad at it baffles me.

Yeah, heaven forbid someone try to engage with you using some light conversation.”

“I find that many “go with the flow” types are often disorganized and have an inability to follow through with a plan.

A certain amount of flexibility is a good thing, but I find that some ‘laid back’ people are often kind of spineless and/or meep around waiting for someone else to make it happen.”

“Always being busy, multitasking, going on little or no sleep because you were so busy all night & got up so early.

Don’t be proud of this, don’t brag about this. You’re doing several things poorly instead of doing one or two things well.

You’re doing your physical, mental and emotional health a massive disservice by stretching yourself so thin. One way or another, this always catches up with you.”

My sister does this. Loves to emasculate and jump all over dudes who suggest she is anything other than a strong woman, despite all the adversity in her life being entirely her fault, and despite her having MULTIPLE fallback people to help her out of her messes anytime.

You’d think she was Precious to hear her tell it. Plays victim any time anyone disagrees with her. Draws lines in the sand. You know, the typical “I hate drama” basic bi**h you see on FB every day but still insists she is a STRONG woman.

Guess what? Strong women don’t need to tell anyone about it.

Usually they’ve not been diagnosed nor do they know the depths of the problems these disorders bring those who are.”

“If you can’t handle me at my worst you don’t deserve me at my best!”

“Being a “thug” or anything similar.

The culture surrounding that is filled with negativity, like disregarding everyone around you because you “only need you”.”

Translation : “I was never taught proper social skills! When people are upset with me I become defensive! I never learned to curate and speak decently to people!

I’m hoping people can like me despite being like this, because changing myself is too hard and I rebel against the idea that people need to be pleasant to be liked!!!””