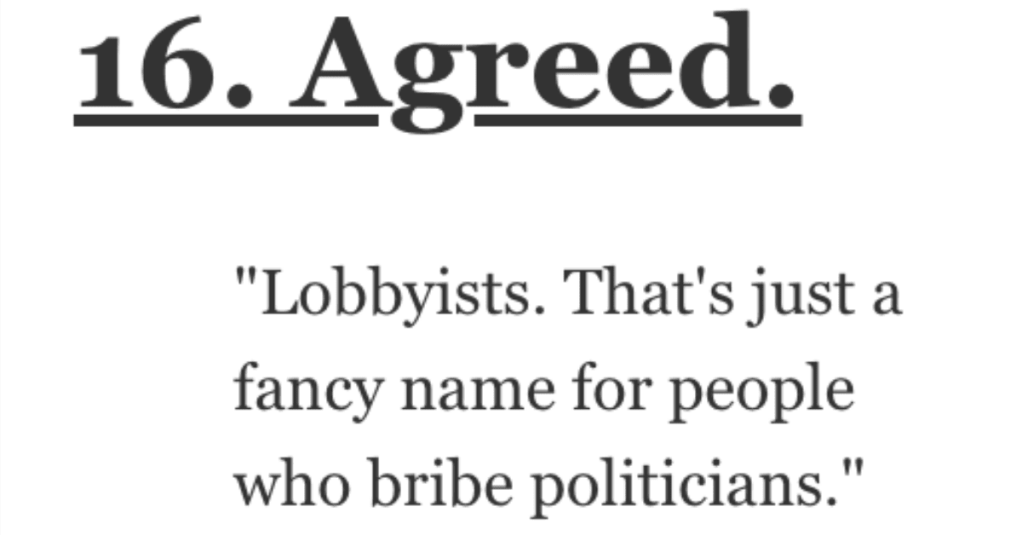 What Professions Would You Cancel if You Could? Here’s What People Said.

It takes all types to make the world go ’round, but have you ever wondered if we might be better off if we could just yeet all of the lawyers in the world (for example)?

These people have, and they have some pretty interesting ideas on what profession makes the world a less great place to be.

1. You knew this was coming.

Hedge fund managers who create synthetic shares and ruin the US economy for untold amounts of money and mayo.

We don’t need them and the risk of death from an unsanitised telephone is just minimal these days.

Everyone’s always says lawyers but let me tell you, after a good lawyer saves your ass or your business, you change your tune.

I want to just add to cart and be done with it already.

I don’t want to discuss my cv with you, I don’t want you to forward my cv after cannibalising it because you know jack all about my profession and just dilute everything.

For profit education is okay, provided that it’s not “essential”, I.e., pre-school through to university. Online masterclasses and courses are a valid profession for people, as with music lessons etc.

The world would be a lot better if no one had that job.

12. Why are they necessary?

That’s just a fancy name for people who bribe politicians.

They should all burn alive for abusing babies and kids.

They have more money than all other lobbyists to protect company profits by keeping medicines unaffordable and insurance shitty so people have to pay thousands to stay alive.

It is evil and serves no purpose.

16. Is this a profession? Because…

Scam callers, I don’t see any legitimate reason they should exist.

That guy who increased insulin costs to $700/month rates.

I’m not even diabetic, he’s just the biggest scum ball I could think of that hadn’t seen commented yet.

MLM, everyone of them should be eliminated. Also called direct marketing and pyramid schemes.

Parasites living off of gullible people, all of them.

Even when the quality isn’t utter trash, they are waaaaaayyyyyy over priced because you’re paying the entire up-line. My favorite example is Doterra. I don’t care if you use essential oils because they smell nice, you do you, but you can buy the same oils from legitimate cites for pennies on the dollar.

Seriously, the mark-ups which seem to be literally just paying for their lies and manipulation are extreme.

Especially any of the Epstein variety that pimp out children.

And banks that charge fees for being poor.

I saw a sign at a CIBC branch advising of increasing fees, and there was a section telling people how they can save money. One point was to maintain a minimum balance of $4000 every day of the month.

As if that’s a choice for some people. Certainly for me it wasn’t a choice up until 3-4 years ago.

There’s a difference between good faith advocacy and the kind of lobbying that happens in the American political arena (usually the difference involves piles of cash vs hard data and analysis without working backwards from a conclusion that just so happens to enrich the lobbyists employers) related largely to Citizens United v FEC.

I mean, it won’t help the most people, but I just find them so deplorable for praying on people in order to enrich themselves, and using those people’s faith to do it.

I got into a debate with a woman who was defending her super rich mega church pastor. He wore $300 Nike sneakers and really high end clothing.

She was like “how can I have faith in a pastor who dresses like a pauper? He is teaching us how to prosper and needs to lead by example.”

Why are there so many of them?

Why do they have all that money?

They should give some of that to other people.

My heart breaks when I hear of the dwindling elephant population in Africa.

Such majestic beasts being devastated by human greed.

Kind of it is a job, criminal one but still a job. One spends time, and gets paid.

Both are Pedophiles, most likely.

I blame the people who follow them. Influencers would not exist if people just ignored them.

Who the heck even pays for random photos of celebs anyways?

But because I want a world where they aren’t needed because all the people have enough food.

30. We should just trust doctors.

These are the people who deny you an MRI your doctor ordered and ask your providers for letters of medical necessity, 10 years of past medical records and current notes and still deny to pay for the service because it wasn’t deemed a medical necessity.

Most of the time with oy a high-school degree and no idea how to read the records they are demanding.

Some of these make a lot of sense, I’m not going to lie.

What about you? Let us know your submission in the comments!