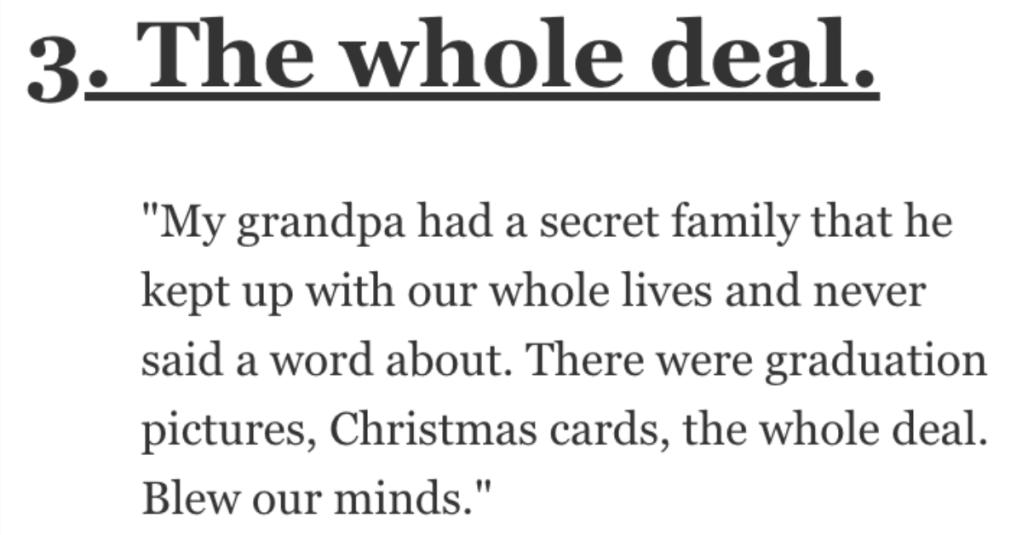 What Shocking Thing Did You Find Out About Someone After They Passed Away? People Responded.

You might think you know someone and then BAM, out of nowhere, you find out a bunch of things about them that blow your mind.

Hey, a lot of people lead double lives, what can you say?

Folks on AskReddit shared stories about shocking things they learned about people after they passed away.

“Found out my uncle was m**dered but stayed alive long enough to tell his wife who the m**derer was.

It was her brother.

I was pretty young when he d**d so my mother never told me the truth until I asked recently.”

“My grandfather k**led someone driving d**nk when he was younger, and it haunted him for the rest of his life.

Later, he “accidentally” s**t himself “while cleaning his g**,” but my dad and uncle were conveniently spending the night at their grandmas that night. It wasn’t til he was a little older than my dad realized it was a s**cide attempt.

He quit drinking right before I was born, and the person I knew was a complete 180 from who he was when he drank. He was born to be a grandpa, and I’m glad we got to see that side of him after the hell he’d caused himself and others for so many years.”

“My grandpa had a secret family that he kept up with our whole lives and never said a word about.

There were graduation pictures, Christmas cards, the whole deal.

“I met all 4 of my mom’s boyfriends at her funeral.

It was a surprise to them and myself.”

“My dad gave up a 100% fellowship for a math PhD in order to work to provide for an unanticipated pregnancy (me).

He really wanted to teach and he was a natural. In the 60 years I knew him, he never mentioned the PhD or fellowship opportunity. Not once.

I found out going through his papers after his d**th.”

“My wife’s dad passed away over 10 years ago. Growing up she had two half brothers (her mom had been married twice before she married my wife’s dad).

Last year during all the initial COVID lockdown she decided to finally go through all the family photos that she had gotten from her parents over the years (her mom was moved into a memory care unit for dementia a couple of years ago).

She’s identifying family members and reaching out to them on Facebook offering them copies of photos they are in if they want them.

But there’s one picture of her and a boy who appears to be a couple of years older that she can’t identify. So she starts asking the various relatives that she’s contacted.

One of them tells her that he’s her half brother. A half brother she had no idea that she had until that very moment when she instantly remembered a comment her dad had made when she was very very young.

Turns out he lives 20 minutes away from us. She found him on Facebook and reached out to him. They spent several days texting back and forth. Turns out his mother wanted nothing to do with my wife’s dad after they were divorced and didn’t want him around his son. Rather than fight her, my wife’s dad just stopped seeing his boy.

After corresponding for a couple of weeks, he and his son stopped by our house to say hello. We all get along very well. He and I text pretty often because we both have ordered Bronco’s that we are waiting for. My wife and him text at least weekly as well.

We’ve been out to dinner with them and are talking about going on a trip together soon.”

“I took care of my dad before he passed, and also handled his finances afterwards (I am the youngest of four).

Come to find out my parents were divorced well before I would have been conceived. That plus the fact that I have blonde hair and blue eyes and all my siblings have dark hair and brown eyes, pretty much got the ball rolling and I started to ask questions of my mother and other family members.

Mom initially denied it, but after I came back with Ancestry results showing another man was my biological father, she came clean.”

“My great-grandfather had not, in fact, been eaten by a bear on Mt. Rainier (he was a park ranger).

Instead, he’d been cheating on my great-grandmother and was summarily run out of town by her brothers.

He moved to Alaska and nobody knew what had become of him until we located his grave, many decades later.”

“That my grandpa left all of his donated book credit in my name at our local indie bookstore.

I came back from college when he passed away and visited the store to pick up some textbooks I had ordered through for the next semester. The gal who owns the store told me when I went to pay for them. I don’t cry in front of people much but when I tell you I had a full on ugly cry meltdown in that store…

I was dsylexic as a kid and my grandpa most likely had some learning disabilties growing up as well(dyslexia wasn’t recognized at that time), but that didn’t stop him from always encouraging me to read. He would read along with me as a kid, and then when I got older he read books I was assigned in school, and whatever trendy YA novels I was interested in at the time so we could talk about them.

We always went to the bookstore to buy them. When his health was failing he couldn’t really read anymore so he did his last donation and ask if he could pass his store credit on to me. He had ALOT of books to donate.

When I say alot, I mean he read a western a day after he retired and had been donating to the store for 20+ years, add on him donating all of the favorite books he had kept over the years and you basically get a discount for life.

I go in whenever I visit family now and the owner joke that I’ll never truly be able to use all the credit he had saved up.”

“So my mother’s father was career military, supposedly, and left when she was nine years old never to be seen again.

I never met the guy and pretty much resented him. Fast forward to 2003 and my mom gets a letter in the mail about some kind of life insurance policy from a Chaplain with a last name we’d never heard of before.

My mom does some digging and finds out that this guy is actually her father. Except he had a totally different last name than she her family’s. And he’s supposedly a catholic priest and was a chaplain in the army for drcades. As in the kind that’s supposed to be celibate.

So yeah turns out my grandparents met during WW2 and afterward ended up having four kids together while grandpa had a whole other life on the east coast.

My grandmother d**d a few years before so we were never able to get the full story but it’s kinda wild that there’s just a whole other family that no one knew about.”

“My great uncle s**t himself in the head with a hunting rifle right before his kids walked in the door from school.

His s**cide letter said he wanted them to find him so they could know how much they ruined his life. They were very young at the time he d**d and no one knew about the letter until our great aunt d**d many, many years later.

It was a whole new layer of hurt for the kids to find the letter.”

Have you ever found out something shocking about someone after they passed away?