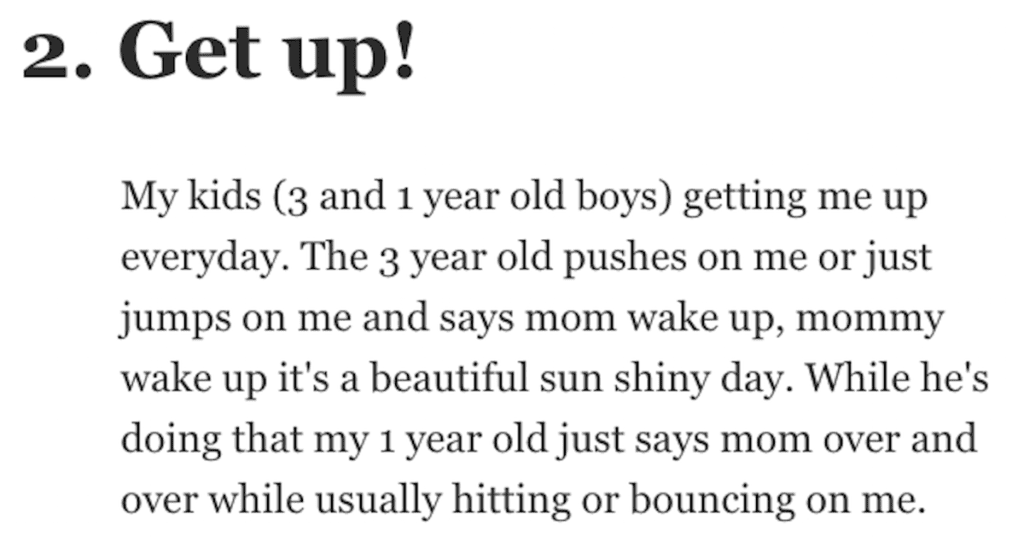 What’s cortisol? Well, it’s basically the “stress” chemical in your body that makes you kind of be aware that something isn’t right.

What small thing brightens your day? from AskReddit

My kid experiencing her “firsts” and getting so overwhelmed by it.

Yesterday she experienced a ladybug crawling on her hand for the first time and her genuine happiness was infectious.

My kids (3 and 1 year old boys) getting me up everyday. The 3 year old pushes on me or just jumps on me and says mom wake up, mommy wake up it’s a beautiful sun shiny day. While he’s doing that my 1 year old just says mom over and over while usually hitting or bouncing on me.

As soon as they know I’m up it is hugs, kisses and the 3 year old saying good morning, did you sleep good.

I frequently fake being asleep just for that.

Idk why I thought of this today but back in 8th grade my social studies teacher referred to 6:00 as Abe Lincoln time (because he was tall? And the hands at 6:00 are standing straight up? Something like that.)

Anyways, me and the guy I sat next to thought this was hilarious and we would make a joke about it any time the hands on the clock formed a straight line and would say what Abe was doing depending on the angle of the hands.

So for example, the time 9:15 occurred during our class so we’d always go “It’s Abe Lincoln’s bed time! He’s laying down to go to sleep!”

my cat comes to the door when i get home and greets me with head butts and meows.

and the outdoor kitty i feed does the same.

people who say cats are heartless have never tried being around a cat.

When someone gives me an unexpected compliment- like when a friend says “oh! You look glowing today” or “oh! You smell really nice today”.

I didn’t do anything special to look or smell good that day, so its a pleasant surprise.

There’s this dude who’s been walking laps at night in the parking lot next to me for a couple of months.

It’s just cool to see someone doing something, anything, small right now.

And it doesn’t even have to be in so many words.

My parents do this thing where they see to each other’s needs without ever having actively decided to do it or even realized they’re doing it until it was pointed out to them.

Basically, for example, one of them will fill up a glass of water when thirsty, drink their fill and then promptly refill it and hand it to the other, who will take it and drink, no questions asked.

Another example is one of them will make a sandwich or grab an apple or something and sit/stand next to the other whilst sharing the thing almost bite for bite.

Also, correcting each other’s plate. Like, if one loves pickles but hates cheese, a mutual transfer occurs from plate to plate without any acknowledgement that this is even happening.

This behavior happens even when they are annoyed or downright pissed at each other, and extends to my brother and I as well.

To me, having grown up with this, it was always just something normal that we do. Friends and significant others have since pointed out what a profound expression of “I love you” it apparently is.

My bowl of cereal in the morning.

It’s more delicious than all the meals thereafter, on par with holiday food. The deeper down the bowl I go the tastier it gets, and I’m left refreshed and energized. It’s my cup of coffee.

Also, the sound of birds.

My son just turned 17 and when it became clear COVID wasn’t going anywhere, he started making us coffee in the coffee press every morning.

His dad doesn’t drink it and is usually out for his run so it’s just the two of us.

It’s turned into a ritual accompanied by something I’ve baked.

If things were normal, he’d be at school, out w his friends, or just somewhere else not spending an hour with me just chatting and drinking coffee.

I talked about this fairly recently, but 5 years ago I lost my dog, Snoopy. He was my best friend for almost 17 years, so it was a very painful loss for me.

One night shortly after he died I got drunk and decided I wanted a tattoo of a caricature of him to remember him by. I asked my room/best (human) friend to draw it on my right forearm, since I am right handed and it was hard for me to do. Well, it was even harder to try and tattoo myself with my non-dominant hand and the result was a very sloppy tattoo. Even though it looks bad, it’s my most cherished tattoo because it’s such a raw expression of emotion.

Whenever I’m feeling shitty or just miss him, I look down at that little goofy face on my arm and remember all the happiness that he brought me and all the great memories we made together. It never fails to put a smile on my face.

I’m from Germany and we used to take pride in putting a lot of time, care and effort into overdubbing foreign movies and series. Most actors had their own professional german voice artist for as long as I can think and that was just how it was done, period. Some even outdid the original and instantly, Bruce Willis comes to mind. I swear, his german voice is so much more badass than the original.

Unfortunately, things have changed in recent years and even the most well known actors might be dubbed by a different voice artist in every other film they appear in. It’s like nobody gives a shit anymore about something that was so sacred once. The X-Files of late became unwatchable because of Duchovny’s new voice. Imagine the shit show when first Marge Simpson’s german voice died and then Homer’s not too long after and they were perfect.

To make a long story short, my day is save whenever I watch an episode of Modern Family and Ed O’Neill comes on, because in times when nobody cares anymore, someone actually went through the trouble to track down the very particular sounding voice actor of good ol’ Al Bundy after decades and asked him if he wanted the job and thank heavens, he said Yes!!

I cannot put my finger on why that is such a deep satisfying feeling every time I hear his long lost familiar voice, but it works like a charm for me every single time.

Alright, that was interesting, but now it’s time for your to share?

What brightens your day?