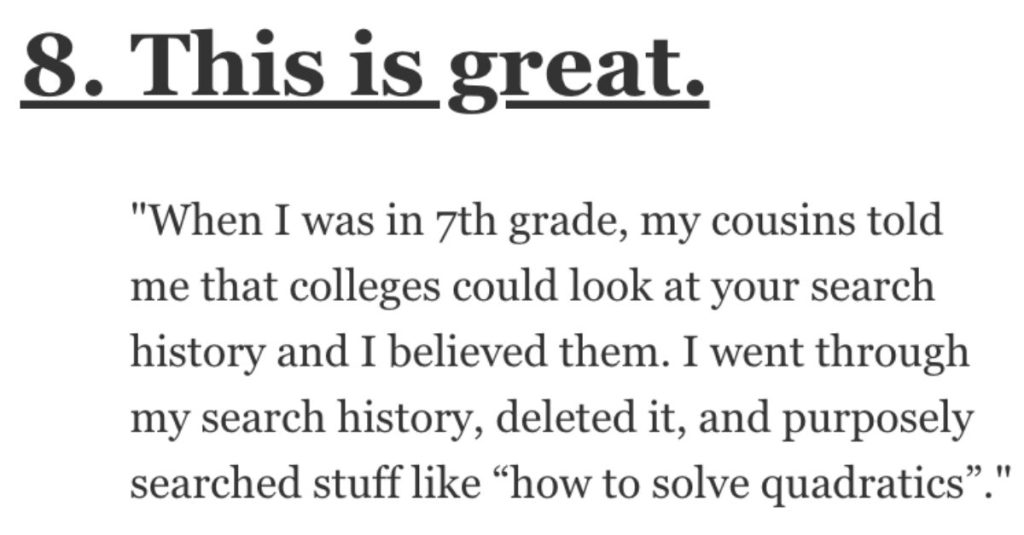 What the Biggest Lie You’ve Heard About College? People Spoke Up.

You never really know what something is gonna be like until you actually do it, and that goes for college, as well.

I think the biggest one was that I would be pretty well prepared for college courses…that turned out to be a LIE.

But I eventually got the hang of it and did just fine.

“That it doesn’t matter if you don’t know what you want to study right away and you can switch your major at anytime. While parts of this are true, college is expensive. I switched my major after my second year and had to take a fifth year to finish my degree.

It’s cheaper to take classes at a community college if you are unsure of what you want to study and then transition into university once you’ve decided. Don’t pay thousands of dollars to find yourself.”

2. I have to learn cursive?

“The two that stand out are professors would only accept papers written in cursive, and the only path to college is doing well in high school.

“My dad spent my entire senior high school year and my entire time in college telling me the same thing over and over. If you have a college degree, any job will hire you.

Doesn’t matter what kind of degree it is or what kind of job it is. They’ll just hire you because you have a college degree. I don’t think I really believed it, but I was too busy to question it anyway.

The best part? When I got out of college and had trouble getting a job that didn’t involve a cash register and customer service, he kept repeating it and claimed I just wasn’t trying hard enough.”

“When I was in 11th-12th grade, I had a handful of teachers assigning unreasonably huge workloads of homework that were clearly valueless busywork. Their justification was that they were preparing us for the rigors of college. And if we found this workload unmanageable, we were doomed to flunk out of college.

My first two years of college were significantly less rigorous than my last two years of high school. Those teachers should have been pushing personal accountability and self discipline, not just stressing us out in the hopes that we develop appropriate coping mechanisms.”

“That the professors don’t help you.

This isn’t universal, I had my share of profs that were sink or swim, but I found a majority were willing to go above and beyond for you if you put the effort in.

If you’re at a research university, some of your professors have made their life’s work out of your class. If you show the interest in their work the same way they have, and show jt by sitting in the front and asking relevant questions, or greeting them with a hello and thank you before and after class, when you go to their office for help, or copies of the slides because you missed class (because you sit in front they missed your face) they will give you a hand.

I had a professor who taught municipal politics (Canada) and the course was largely about separation of powers (federal, provincial, municipal), responsibilities. The guy was a super nerd about it, and as it turns out I was too.

Really enjoyed the class, always sat in front, and when my girlfriends mom passed away when a major paper was due, gave me all the time in the world to finish it. Someone passed away that was really no relation to me, and I basically handed the paper in after finals were over, 3 weeks late. No problem.”

“A high school teacher told us that: “The summer before college is the last long vacation you’ll have.”

The (many) years of college were actually the longest vacation I’ve had.”

“S** and drinking all the time.

All I remember is paper deadlines.”

“When I was in 7th grade, my cousins told me that colleges could look at your search history and I believed them.

I went through my search history, deleted it, and purposely searched stuff like “how to solve quadratics” or “what does i represent” so I could sound smart/hardworking to colleges.”

“Many people told me that living in a student hostel is better than to rent a room or flat because it’s all fun and stuff but I experienced both and for me a separate room all to myself was infinitely better.”

“That the friends you make in college will be the best ones of your life.

Didnt happen to me. My closest friends are a few guys I met wayback when I was in elementary school and they are like brothers to me.

No one could be a better friend to me than those guys. I made some friends in college but they were just drinking buddies and I lost touch with most of them.”

“That “smart and mature people go to college”.

No matter what college I attended, or what campus I visited and regardless of their Alma mater, there are a fair amount of fools on any campus and from any school, and an expected number of people still experiencing the growing pains of adulthood.

This isn’t to say they shouldn’t be proud of their academic accomplishments or happy about their career prospects. Rather, it is simply that they are by all means deficient in areas I think one ought to not be deficient in. Maturity, insightfulness, self-awareness, et cetera.”

“Oh there’s a bunch that I heard across all 3 colleges I went to:

-Every building is haunted

Most of that is totally false.”

What lies were you told about college?