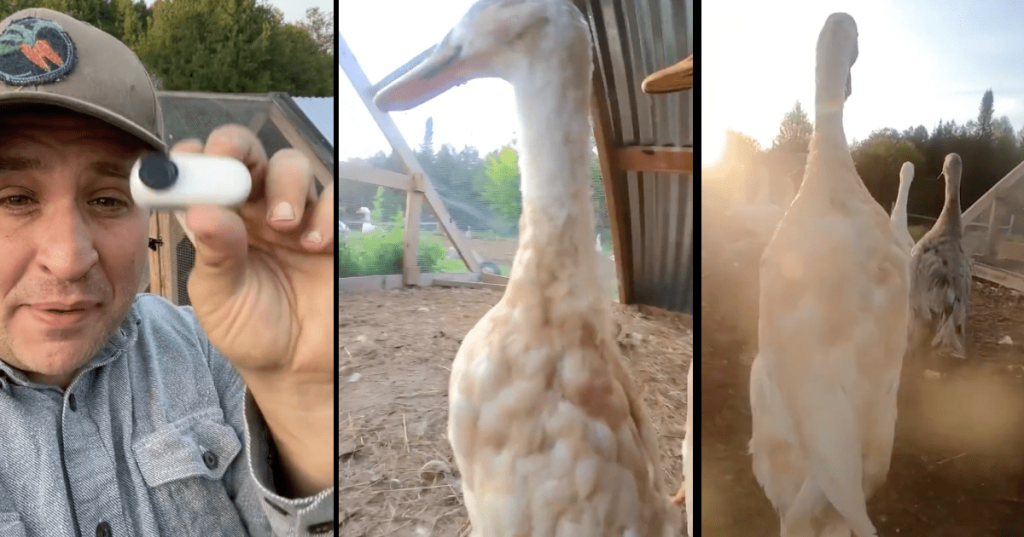 Before I wrote this article, I had no idea what a “runner duck” was, other than the obvious – a duck that runs.

It turns out they’re an independent species of duck that runs rather than waddles, and that stands completely upright like a penguin.

People keep the ducks as pets because they eat garden pests like insects and slugs, provide good natural fertilizer, and are excellent layers to boot.

Once they’ve outlived those other sorts of usefulness, they’re also good to eat (I hear).

I assume that Morgan Gold, who owns Gold Shaw Farm in Northern Vermont, keeps the ducks for all of those reasons, but you can tell from his videos that he also loves his “crazy” runner ducks.

Recently he thought it would be fun to mount a small camera to one of them in order to see what the world looks like to their perspective – and you can tell that, whatever else they’re doing, those ducks are having a good time.

“POV: You’re part of a flock of runner ducks on our Vermont farm.”

If you loved this, you’ll have to check out Gold’s other videos as well – specifically the one where he attaches a similar camera to his beloved rooster Alexander Hamilton.

Who hasn’t wondered what roosters do all day, am I right?

If you could choose, what farm animal would you want to chase around with a camera? There are honestly no shortage of options, so farmers like Gold should just start at the top of a list and go alphabetically.

I’m personally most excited for the goats, as long as they’re not going to eat the cameras in the process.