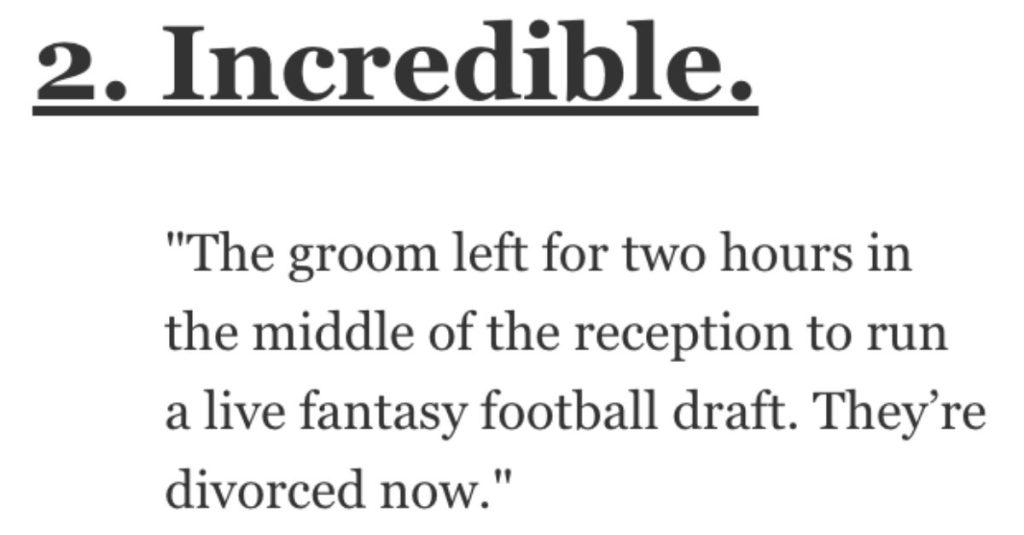 What Wedding Moment Made You Think the Marriage Wouldn’t Last Long? People Responded.

You never really know when you go to a wedding how long the marriage is going to last.

Check out these stories from folks on AskReddit about weddings they went to when they didn’t think the marriages were gonna last too long.

“One of my friends got married, afterwards she looked at me, crying, and said ” what did I do? “.

They were separated by the time the plane landed from their honeymoon. He was a good guy, she was a mess.

The beta fish in the flower centerpieces lasted longer than the marriage.”

“The groom left for two hours in the middle of the reception to run a live fantasy football draft.

“When they got married illegally in high school.

Two 16 year olds from different states who had to lie on their certificate to get approved by the state.

It was annulled when the father of the groom found out.”

“The bachelor party and the Bachelorette party were in Vegas at the same time. Across the hall from each other.

The bride and groom got in a huge fight on the last night of the trip and when I was leaving I said “I’ll see you guys at the wedding” to the groom and he replied “I’m not sure there’s gonna be one.”

There was a wedding, but they were divorced within 18 months I believe.”

“Two friends of mine got married, and when they gave their vows, the guy started laughing at the part about being faithful.

“The entire bridal party, including parents of the wedded couple, entering in to a betting pool of how long the marriage would last, at the wedding reception.”

7. At least the buffet was good.

Fist fight broke out at the head table during the reception. Between two groomsmen. They were arguing about which of them had slept with the bride first. Groom was oblivious.

He came home from work early one day two years later and caught her in bed with another man. Surprised it took that long.

Midnight buffet was amazing though.”

“The groom had a “best woman” instead of a best man.

Nothing wrong with that, but her toast left the whole room in awkward silence because she was clearly in love with him.”

“The bride and groom did the first dance then spent the rest of their reception completely apart from each other getting s**t-faced with their own separate friend-groups.

The only other dancing all night was the bride dancing with her high school friends, the father-daughter dance and the mother-son dance, during which the groom was crying. The best man’s speech didn’t mention the bride at all and basically boiled down to “Groom, you’re married now but our bond is older and stronger, all of our hunting and fishing trips together are the best thing in our lives, can’t wait for more.”

Such a sad, desperate atmosphere. They made it a little over one year.”

“When he smashed the cake in her face and hair, then went off drinking with his buddies.

In 12 weeks, she filed for divorce. Good thing I didn’t buy an expensive gift.”

“One where the wedding was all about the groom promoting his band. He even “sang his bride a song” that was literally just him showing off his vocal range with some classic piece.

She stood up and joined him on stage half way through and he looked annoyed that he had to share the limelight. They lasted about 2 years (he was sleeping with the other vocalist in the band.)”

“I went to a wedding held at my town’s hunting lodge. Tons of stuffed animals on the walls and no AC in July.

Bride was 7 months pregnant and smoking outside in between the wedding and the after party and the new husband was totally s**t faced by the 2nd song which was “R**e Me” by Nirvana as requested by the bride’s 16 year old daughter.

The whole thing was one giant trashy s**t show haha. They divorced a year later.”