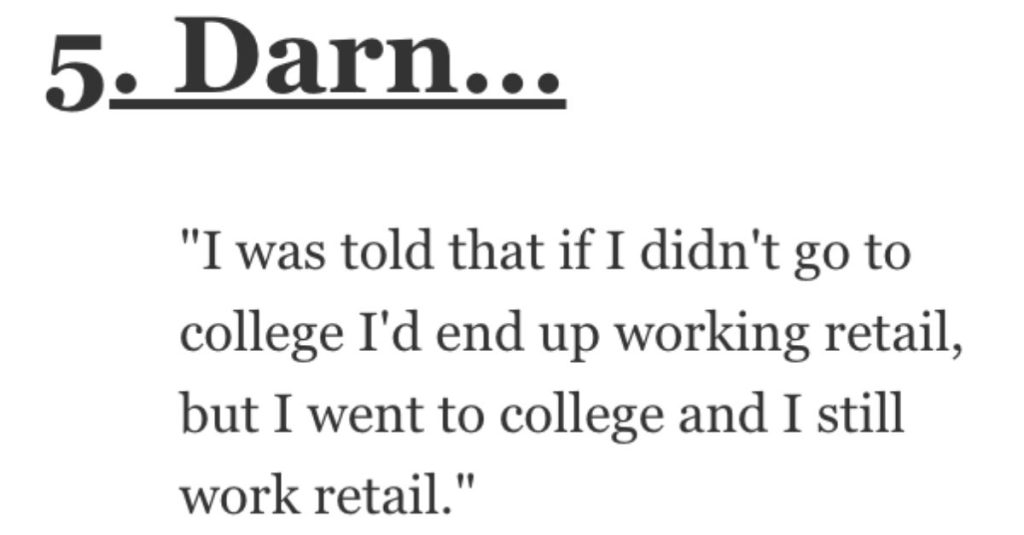 What Was the Biggest Lie Sold to Your Generation? Here’s What People Had to Say.

It’s funny how drastically things can change from generation to generation.

What’s expected of one age group gradually disappears when the next batch of folks are coming of age.

But one thing that remains constant is that every generation has certain lies sold to them.

And here’s what AskReddit users had to say about this.

“Don’t act up in class Johnny…

It will go on your PERMANENT RECORD!”

“The war on drugs.

Turns out that declaring war on a concept without attacking the societal roots of the problem is just a way to funnel more money into the military-industrial complex.”

I remember when grocery stores went from paper bags to plastic because “they’re recyclable!” Literally everything else started coming wrapped in a ton of plastic (instead of cardboard) because it was recyclable. Single use plastics were great, because we’d just recycle the plastic, and use it forever!

Turns out, it was just cheaper, and recycling had nothing to do with it. Most of that plastic can’t be recycled anyway.”

It’s not a ladder, it’s a pyramid. Only one person can be CEO, a handful can be executives, a bigger clump can be in some form of middle management, but the majority will always be “individual contributors” – what an amazingly corporate term.

You’re often better off with an in-demand skill set that you can shop from company to company. Unless you enjoy fighting and scrabbling and climbing over people to keep getting promoted. Sure, you may have c**ppy bosses, but even the CEO has to go in front of the board and be told everything that’s going wrong.”

“I was told that if I didn’t go to college I’d end up working retail, but I went to college and I still work retail.”

“Fat is bad. Sugar is good.

This is why America has an obesity epidemic. Even now, older generations tout the health benefits of low fat things, without bothering to look at sugar contents.

High sugar processed foods that happen to be low in fat destroyed multiple generations. Thankfully I think Gen Z might be the turnaround. Older generations are pretty f**ked up.”

“Medicare and social security will protect you.

Based on how things are going, anyone with 30 years or more before retirement better have strong backup plans.”

“Work hard for your company and they will take care of you.

“Growing up everyone i ever met said to never get a credit card.

In my life I paid off 3 vehicles early only to be told the second they were paid off my credit was dropped to a no rating because I wasnt actively in debt.”

“”You can be anything you want”.

Not everyone can become a millionaire astronaut and rockstar and professional gamer and parent.

There is a reason why some us have the most boring jobs anyone can think of.”

“”Good things come to those who wait”.

Bulls**t. Go get what you want from life or it’ll pass you by.

““It’s a one in a lifetime event! These things don’t happen all the time” – In reference to things like wars, devastating floods, wildfires, hurricanes, earthquakes, tornadoes, mass shootings/g** violence, terrorist attacks, and now… pandemics, apparently.

How many more ‘once in a lifetime’ freak events am I going to be living through? When can we have some peace and quiet?”

What lies do you think were sold to your generation?