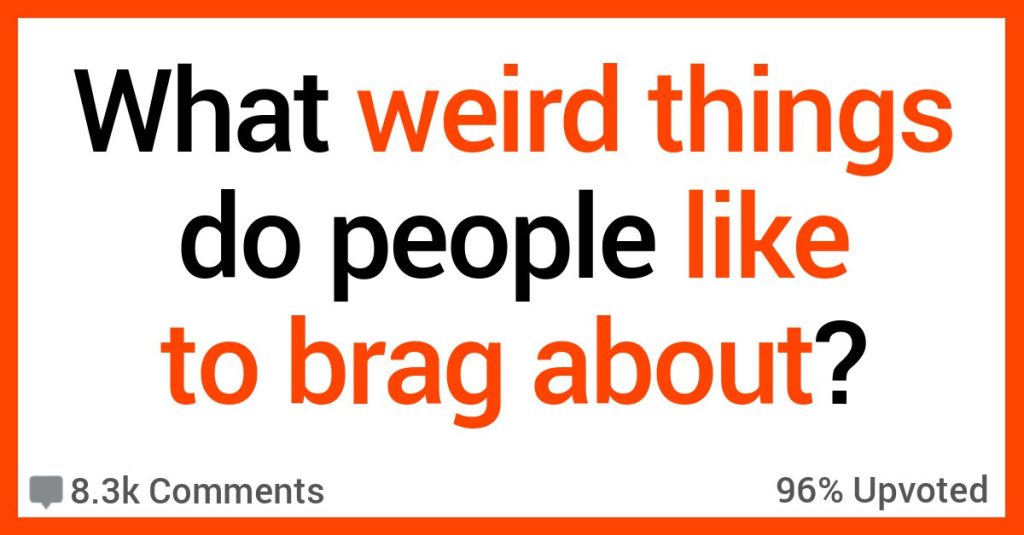 What Weird Things Do People Brag About? Here’s How Folks Responded.

Pride is one of the seven sins and no one likes to listen to other people brag about themselves.

What’s even weirder is when what people are bragging about is silly, or ridiculous, and you can’t help but wonder why no one can stop acting like it was some kind of accomplishment.

If you’re not sure exactly what I’m talking about, here are a bunch of things people really think are cooler than they are.

I used to know a guy who would brag about all the girls he slept with behind his girlfriend’s back. Congrats on the STDs and complete lack of the concept of commitment I guess.

2. Because that’s an accomplishment.

When you’re in the 6th grade, it’s cool. When you’re 35, it just means you can’t find pants that fit quite right.

I had a colleague that would always mention how their truck has 4-wheel drive. As if no other car does.

Fights they got in when they were younger. Most of them aren’t even captivating at all.

5. So many problems with this.

mental issues???? like ive known people to literally fake mental problems cause they think its cute or quirky or something. its not something people should want to have. it ruins your life. pls stop.

Because of those people it makes it difficult to say you have mental health problems without making it seem like you’re looking for attention.

“I was a gifted student”…at one of the 100k+ public schools in the US, that all had classes full of “Gifted” students.

7. Learn something new, my friend.

I’ve got two that bother me. The “I don’t know anything about computers!” people, and the “I never read!” people.

I work in IT and I have legitimately had to teach an adult how to use a mouse. A gorram store manager, who needs to use the computer probably about 65% of his day. Don’t brag about never updating your skills to keep up with your industry. He only lasted a month before they fired him for being incompetent.

And the “I never read” people drive me nuts, because I read as often as I can, and they often interrupt me while I’m reading on my break just to brag about how they never read. Shut up and leave me alone, I’m busy.

Moms that brag about how they haven’t showered or taken care of themselves in days because of the kids.

Self care is important and necessary.

How good of an athlete they were in high school.

How much you wanna make a bet I can throw a football over them mountains?… Yeah… Coach woulda put me in fourth quarter, we would’ve been state champions. No doubt. No doubt in my mind.

People who brag about mistreating service workers just bring my p**s to a boil. Every time I hear someone chest puffing and bragging about how they told off some McDonald’s worker it makes me wish they’d take a f*cking blender to the face.

Even if you are in the right and a mistake was made you don’t get to treat some minimum wage food service worker like a f*cking slave to be owned or a**sed. Mistakes happen. You didn’t lose a fu**ing kidney. Be a civil human being and respect one another.

As a woman I absolutely cannot stand when a woman brags that she is a “Bad B**ch.” Mostly because the only women that I’ve ever heard brag about that are usually super loud, obnoxious, and have really abrasive and unapproachable personalities.

When someone brags about liking a group or artist “before they were cool” even though they had 200k+ followers.

How they’re not into whatever is popular, and that somehow makes them better.

I was one of those people. I missed out on some fun things that I’m just now getting into.

14. Definitely not something to be proud of.

I never understood the appeal of being a self proclaimed a**hole.

How much they spent on something

How little sleep they got

How many hours they worked

How they don’t read

How many bananas they can eat in one sitting.

how d**nk/high they are, while at the same time bragging how much they can drink/smoke…

i was that person once…and quite long even after my teens were over, looking back i ask myself why and how i kept it up for so long

18. Literally anyone can do it.

How many kids they have.

When I was a waitress we had a cook who crowed about how he had 12 kids by multiple women.

That’s not something to be proud of, my dude.

19. That’s not as healthy as you seem to think.

I’ve noticed in mom groups the women like to flex by saying how long their baby or kid hasn’t been without them.

For example, “my kid is 7 and I’ve never spent a night without her”

20. Not really something to be proud of.

How “savage” they are…AKA how badly they f*cked someone over.

Some people rise up by improving themselves. Others do it by bringing those around them down.

I usually assume the brag is a defense mechanism / show of power to compensate for something.

When people try to 1-up others’ struggles with their own (i.e. my life is so much worse). It’s sad, really. Why do you need to convince others that you have it harder than them? And they seem to always sound happy discussing it because it makes them feel superior in some way.

Maybe that person’s issues might not seem big to you, but they’re big to that person.

23. It’s definitely not something to joke about.

“Being OCD” even though they are not obsessive compulsive at all. Like being OCD is some organizational badge of honor.

The casual use of that medical ailment to show how much attention to detail you have is awful. It’s not even remotely the same thing. True OCD isn’t a choice and it can negatively impact your life in so many serious ways.

It’s just like people who flippantly say they’re bipolar when they just mean they’re indecisive. It’s so disrespectful to people suffering from the real disease.

Pre-pandemic…..how sick you are yet you still made it in to work because you are that much more hardcore than the wimps who stay home for any little sniffle.

One time this one guy made it into work an hour after being under anesthesia for a colonoscopy. This same guy also came in with a terrible flu and fever that he would go throw up in the bathroom every hour and refused to go home.

They think they are so awesome, yet all they are doing is screwing over the entire office by getting half the employees sick, and the other half left to pick up the slack and work double time. F**k those type of people.

I had a coworker who thought I was flexing on them by using chopsticks.

How they don’t read.

There was a common attitude among my classmates that reading is for losers and nerds only.

I still meet adults who say stuff like: lol I never read a book.

If it’s that good, they’ll make a movie about it anyway.

How little time they have.

It’s annoying how they’d be bewildered about how people would have time to watch films or read books and make comments about how they could never find the time but then I’d see them on be on social media for 8+ hours.

Professors bragging about how MANY students fail their class.

They use it to terrorize students and wear it as though it’s a badge of honor. It’s unbelievable how full they are of themselves, that not once did they ever pause and ponder if the failing rate was due to their lacking. Well, just like that one viral post said, I guess congratulations to you ma’am/sir, you suck at your job.

Additional: It irks me when some professors think of themselves HIGHLY because they have all these degrees and got off from a great university, and so on, to the point that they’re completely dismissive and unreasonably mean. Like, come on, you aren’t even that competent. You cannot teach to save a life, let alone actually educate us, and yet you have the nerve to be totally inconsiderate and boastful?

29. Both are equally annoying.

The other version I like is “[hobby] is such a waste of time.” Proceeds to watch sports and news all day every day

High schoolers who try to flex the expensive overpriced clothing that there parents bought for them.

Dude still lives with his parents.

It always boggles my mind how kids of rich parents flex their money.

People who brag about how little sleep they got.

It’s always in the context of trying to one-up someone else.

One person will say “I’m so tired, I only got 7 hours of sleep.”

I H**E this workaholic aspect of American culture. We need to change it. While work is obviously important, there is more to life than work and productivity.

Mine is a bit specific – but women who brag on their bfs/husbands for “babysitting” their own kids to give them a break. Raise your expectations on what a good father is ladies!

For example here’s one I saw on FB:

Wife: I am so lucky. [Name of Husband] has agreed to babysit our girls today. He’s a shrewd negotiator though – he’s getting some “special” attention ? from me tonight so I can get some time out of the house. Can’t wait! Thanks [Name of Husband]!”

I know the husband – he works part time and usually when he’s not working, he’s out with friends while his wife is home with their 3yo/2yo. The bar is set so low for some guys that occasionally watching their own children is cause for celebration/reward.

Being a responsible parent. Bi*ch, that’s the minimum standard.

“I take care of my kids. You’re supposed to you dumb mother f*cker.”

Never brag about these things, y’all – we’re over it!

What’s something you keep hearing people brag about and can’t understand it?

Let’s hash it out in the comments!