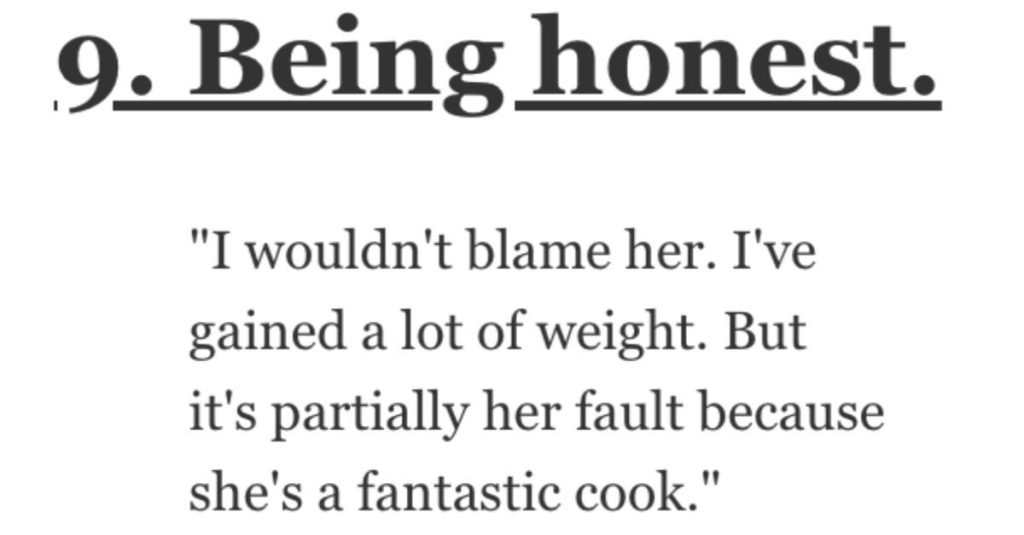 What Would You Do if Your Partner Said They’d Marry You if You Lost Weight? People Responded.

At the very least, this kind of situation could lead to a lot of hurt feelings.

And it’s hard to say how any of us would react to this because every situation is different.

“This happened to me.

My weight had not changed since I met him. He just didn’t like my body and figured he could get me to change. Same went with the way I dress.

“I would agree and work on myself then end the relationship right before wedding.

“Actually had this happen to me.

I used to be very thin (129lbs at 5’6”) then I gained weight to 165lbs which is just above healthy I believe for my height. Well I was in this awful relationship and engaged briefly but he kept saying “you’re not how you were when i met you, I’ll propose when you lose more weight,”

The thing is he’d always say that he’d suppose me in weightloss help me cook etc. But never would.

He didn’t help me clean the house, cook, or clean up after I had cooked. Wouldn’t even pit food away so if I cooked, if I didn’t put the food away he’d let it sit out to waste/rot. Also didn’t buy groceries.

Also want to say, this man didn’t have a job, and was home pretty much all day everyday. Slept until noon, didn’t do dishes, played stupid video games, and was a complete asshole (like I couldn’t leave the house without a “good reason” level asshole)

I gained so much weight I ended up at around 230lbs from lack of time, money, and stress (of course mixed with poor eating habits) and he was so upset.

He kept saying how unattractive I was to him and how he’d only do certain sexual things with me once I lost weight which really hurt me and fucked up my self esteem to be honest. I felt disgusting and I cried ALL OF THE TIME.

He straight up couldn’t figure out why I was always so upset and sad and blamed it on me saying I chose to be sad and that I’m the most negative person he knows and how I have no friends. (All of which is not true in the slightest)

Anyways, I finally left him and while I’m still over 200lbs (which I’m very excited to work off) I can say I feel a lot lighter losing the 180lbs of d**d weight I was carrying around for so long.”

“As a guy, it depends. Not only on the current situation, but the way it was presented.

For context, I’ve been average weight for almost my entire life. Say for whatever reason I had gotten morbidly obese– “life is going to shit so I turn to food for comfort” situation. If my partner came to me and was like “I care about you, but this isn’t healthy. I’m concerned for you and for our future if this keeps up”.

Then I would do something about it. It isn’t being done for vain or superficial reasons (i.e. “I love you, but only if you look like X”) it’s being done out of concern for my well-being, and those are two vastly different things.

But if my partner were to just pass down an ultimatum without really communicating anything (or passed down the ultimatum for vain/superficial reasons)– then f**k you, I deserve someone who will love for me who I am, and minor weight fluctuations are a part of that.

If they can’t handle a person gaining/losing a few pounds here and there, how are they going to handle thirty years of marriage? They aren’t, and that’s a major red flag– not only for the current relationship, but for the supposed marriage in question.”

“Even “I’m going to leave unless you get healthy” or “I don’t find you attractive at this weight” would be better than “I’ll marry you if you lose weight.”

You don’t make an “in sickness and in health” promise conditional on something like that!

I suppose it’s reasonable to leave a relationship over weight. But not a marriage. I wouldn’t enter a marriage with my weight hanging over my head as a condition.”

“”Thanks for the brutal honesty. I guess it’s time to stop pretending it’s just a few pounds. You’re in charge of keeping me accountable ”

If not your partner, who can express that level of honesty with you?”

“Once I calmed down, I would speak with a professional- my doctor, a dietician, my therapist. Maybe even get a couples therapist.

If someone I loved set such a hard line, maybe I legit have a health problem and I’ve needed a wake up calls I don’t think it’s unreasonable for a partner to have expectations for their partners self-care.”

“Marriage is a huge commitment and your spouse/partner wanting the best version of the person you marry isn’t totally wrong.

Could it be worded different? Sure but if you’re just letting yourself go and not taking accountability be glad it’s your partner holding you accountable.

Now if your partner is just an a**hole then that’s a different story. If it’s love then do yourself a favor and get the f**k up and lose some weight.”

“I wouldn’t blame her.

I’ve gained a lot of weight.

But it’s partially her fault because she’s a fantastic cook.”

“As someone in remission from anorexia, it would destroy me.

I would probably be triggered in to a relapse and lose all trust in him as they know my past.”

“My now-ex wife did something similar to me.

One of the things we fought about most was my weight. 5’11, 245ish at the time. I ended up losing a little but the overall stance of our relationship didn’t improve. She ended up leaving me for different reasons, chief among which was we never spent time together.

We never spent time because I was working 80+ hours a week to support us. She worked too, but didn’t have much left over after taking out the necessities, and spending an assload on herself despite my consistent asking of her to reign in the spending.

Ultimately, the whole weight thing should have been an indicator that her overall priorities in life weren’t with mine. I didn’t care how she looked, I loved her and that made her beautiful to me. She was more interested in wealth and power, and apparently a chubby husband didn’t line up with that.

The real question here is why they want you to lose weight. If you’re 400lbs or have serious health problems related to your weight, then it isn’t unfair to ask those be mitigated before making a lifelong commitment. If the reasoning is more shallow, it might be time to take a hard look at the relationship.”

“My girlfriend told me she did not want to sleep with me because she was disgusted by my overweight appearance.

I love my girlfriend very much and it is important to me that she feels she is getting the best life she can.”