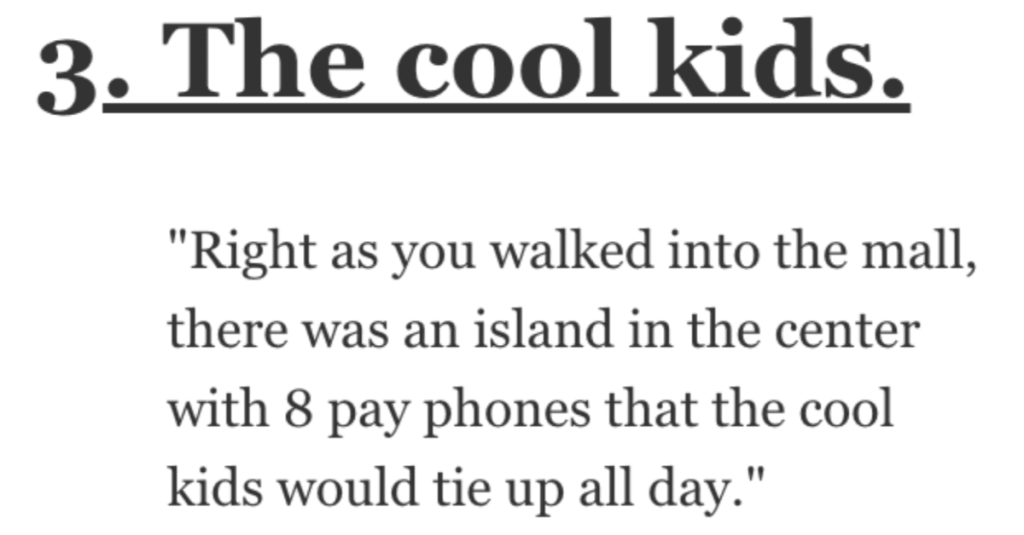 What Would You Expect to See at the Mall in the 1980s That You Wouldn’t See Today? People Responded.

Let’s hear from folks on AskReddit about what you’d expect to see at the mall in the 1980s that you wouldn’t see today.

“That store that did the heat transfer t-shirts.

“The mall by us had a pet store with a brick wall, but the wall had these giant bubble windows with hamsters so people could see them close up.”

“Right as you walked into the mall, there was an island in the center with 8 pay phones that the cool kids would tie up all day.

I have no idea what they would talk about, but it was always the same group, pumping coins into those phones. People knew the numbers for each phone, so the pay phones would ring all the time.

I used to love to stand by them and wait for one to ring while my family waited in line at Morrison’s Cafeteria.”

“I miss when malls had a sweet central water feature.

Filled with sometimes 10’s of dollars in shiny change.”

I spent a good chunk of my childhood in there before Barnes & Noble came to the area.”

Four high school girls, stoned half the time, pumping quarters into the video games and giggling.

What a great time to be alive.”

“Giant catalogs at the checkout registers of the anchor stores and the charge card receipt machine that must’ve weighed 15 lbs.

I still hear the thunk THUNK of when the cashier would slide it over the card.”

Most of my 40-something female relatives had those done. They all looked like they were shot with a make-up gun, and had the biggest hair.

So many flipped up jean jacket collar, look over the shoulder shots.”

“Hickory Farms with the wall of candy in wooden barrels that you could buy by the pound.

My grandma would buy those jelly filled strawberry hard candies.”

“A concert or a meet and greet of someone low level famous in the middle of the mall.

I met soap opera stars, Richard Karn, and The Osmond Boys (a pop band that never really took off, they were like nephews of Donnie and Marie Osmond).”