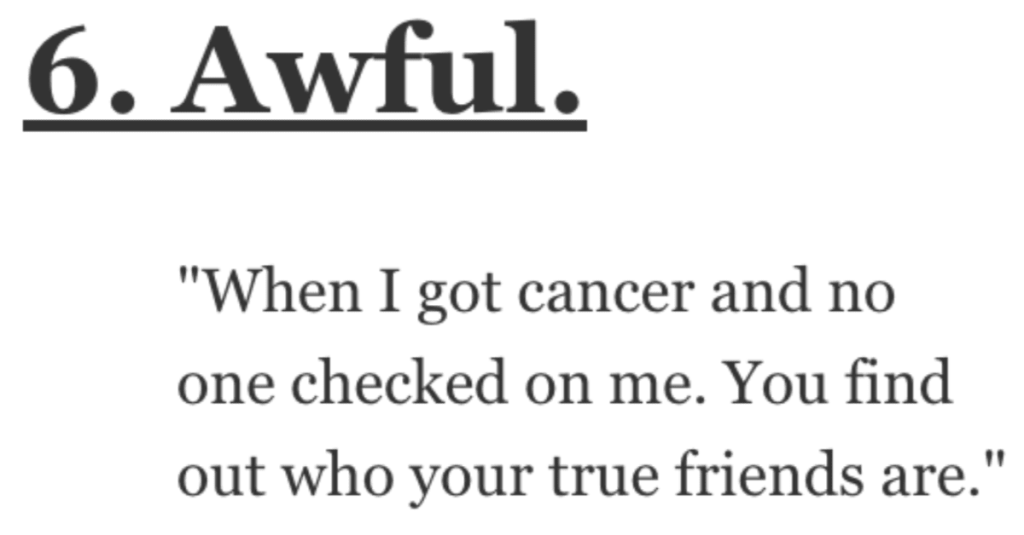 When Did You Realize Your Friends Were Jerks? People Shared Their Stories.

We all go through phases when we really like our friends and then other times when we can’t stand them.

And sometimes the “can’t standing them” part is permanent because you realize some of your friends are total jerks.

Let’s hear from AskReddit users about when they realized their friends were jerks.

“Worked with and rented a large house with my friend group after high school. Dumb and inexperienced with life, I didn’t know they were lying to me about bills and making me pay more/whatever they felt like until a family member asked about it.

Eventually they all looked at moving into a new place without telling me. One felt guilty and confessed- they would basically steal my money to shop with and planned on moving out while I was visiting family so I came back to an empty place and responsible for everything.”

“The last time I tried throwing a birthday party for myself.

It always seemed like the ratio of people who said they’d come to people who actually showed was…lacking. But my final attempt. I had 20+ people say they’d show. Exactly one actually came.

I’ve never had a birthday party since. But I’m still good friends with the one guy who showed.”

“Had a small group that regularly went out to dinner on most Wednesdays after work. One week I was told “oh we aren’t doing anything this week.” OK, no big deal, sometimes we didn’t go.

Stopped to get gas on my way home, across the street from the restaurant we usually went to, and there they were.”

“I had a whole group of “friends” that would all get together at restaurants, go floating down rivers, bowling all sorts of fun stuff but the common denominator was that we ALWAYS drank at every event.

When I got sober, I stopped getting invited.”

“I remember I was severely depressed and I called someone I thought was my friend. When he realized I wanted to talk about real shit he made up an excuse to hang up. After that he kept ignoring my calls. D**khead.

What’s crazy is I was there for that dude when his wife left him for another guy. There were times where I wanted to escape his depressing stories, but sat there and listened because he was my friend.”

“When I got cancer and no one checked on me.

You find out who your true friends are.

I Googled “deserted by people when I had cancer” and was surprised to see it happening to more people than I imagined.

I was so angry that I wished illness on them all so I could throw it back in their faces by saying “yeah, well that sucks man. You take care now!””

“I found myself getting irritated whenever they called/hit me up…because every time they’d only ask for something , never just to talk or hang out.”

They still came, then had the nerve to tell mine the trip would’ve been better without her right to her face when I was out surfing.

This was never established as a guys trip at any point. She fed them, organized the trip as a whole, etc.

“My oldest and best friend who I’ve known since we were 5 started travelling around Europe in a camper with his girlfriend so we rarely saw each other.

We work together on the side doing websites, talk every week by text or video.

He calls me around midnight saying he’s back in town and invites me over for drinks, when I arrive I find 10 other people there already because the party actually started hours ago and he forgot to invite me.

Not only that but it turns out he had already been home for weeks, we even talked during the time he was back about work and not once did he tell me he was literally 10 min down the road from my house.

Told him to go f**k himself and never talked to him again, he tried to apologise when he worked out I wouldn’t help him with his websites anymore, then he refused to pay me for websites I had already built for him.”

“We went on vacation together and I went to bed early, they proceeded to talk s**t about me for 2 hours straight.

Then, when confronted they said they’d never do such a thing.”

“I’d see my ‘friends’ every single weekend before the first lockdown happened to go clubbing/drinking.

When the lockdown hit and everything closed we slowly started to drift apart, 3-4 months later we didn’t speak a word to each other and haven’t done since.

Doesn’t hurt me or anything though, stopping drinking was just the happiness I needed, crazy how it works.”

“In my early 20s when I moved out of a shared apartment and my “best” friends from high school never took over the utilities. I got stuck with gas and electric for them for five months. When I called them and asked about it they laughed at me.

Seemed really s**tty to blow a decade old friendship over $400 each but I guess that’s what I was worth to them.”