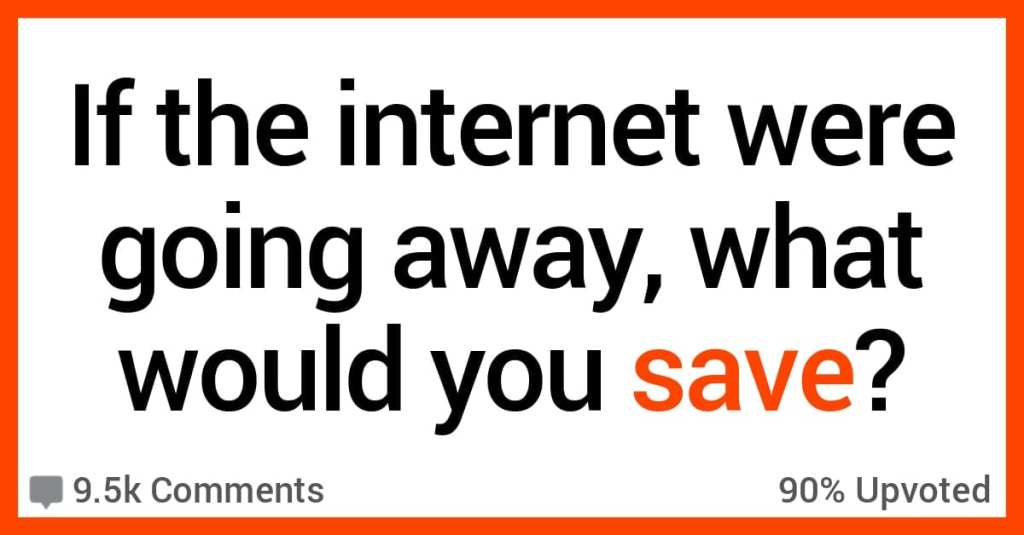 What Would You Save if the Internet Were Going Away?

Reddit’s got a horrific scenario it wants you to chew on, and then it’s gonna ask you to make a tough decision about it.

You ready? Prepare yourself. Here we go.

The internet is scheduled to go down forever. You have a week to prepare and download anything from the web you think is necessary to have for the rest of your life. What do you download and why? from AskReddit

So, the time constraint is the interesting part. That would mean that the biggest determining factor in how much you’d be able to get is how good your internet connection is.

My home PC, when plugged straight into the router, pulls down about 450mbps. Of course, actual download speeds are almost never that fast, because it depends on what the host is giving you, so let’s slow it down to 100. Allowing for a couple of hours of downtime each day of the week allotted, that means I could nab around 50 terabytes – assuming I ran out and bought some new drives so I had somewhere to put it all.

That’s way more than enough to nab all of wikipedia. Nice.

Let’s see what other nerds thought.

Every How-To book ever written.

At this point, the only way the internet is shutting down is if the world is ending.

Gotta know how to start over.

The Pirate Bay’s top 100 in each category for the kneejerk shotgun approach.

After that an offline copy of Wikipedia, my entire GOG library, and everything from Project Gutenberg.

I got lost in the middle of nowhere this summer, had no cell service or internet access, and realized it would have useful to have offline road maps on my phone.

Anyone have recommendations for a good and/or free source?

Everything I need to know on how to build the Internet

6. Ya’ll realize we had houses and stuff before the internet, right?

I’d start with books on how to live off grid. How to dig wells set up irrigation. Gardening and food preservation. 3D printer plans for all sorts of tools and equipment. Animal husbandry and everything I would need to set up my own cnc shop.

I would also be downloading science databases, sewing, leather making etc. I was 27 before I ever had access to the internet and I had already graduated with a B.S. and at first it was a novelty but I soon realized how powerful it was when I realized that you get access to a lot of knowledge that normally would be unavailable to the average person.

The internet became the ultimate do it yourself book.

That’s about 70TB I can download so I’d probably go with all the music ever made and then get rich selling bootlegs because everyone else is downloading wikipedia and p*rn.

All of the medical, history and math books that I can find.

And every song I can think of.

Well since I work in IT, specifically network infrastructure, I’ll be out of a job.

So I guess some books on welding or something.

This is literally why I have about 3TB of lossless music copied to four different hard drives. I also have thousands of books too.

I simply do not need any corporation, record label, or anyone deciding how I consume music content for me.

I have a backlog of thousands of albums I will never hear even though the majority of the things I haven’t heard I very much would love to hear…just not enough time or motivation for it.

So, I guess if I had to, I would download whole albums of lyrics since I know where to get them and I’ve done that in the past. It’s an achievable goal.

A video of my dad talking to my first grandchild.

It is the only recording I have of his voice.

I find out who all these hot singles in my area are and why they want to meet me.

The real ones are going to use that time to commit all the cyber crime possible ( steal money, hack and steal information of bank accounts, financial statements, dirt on ppl etc)

I would just invest in a good pair of prescribe glasses for reading.

I do not want end up like that dude from the Twilight Zone.

Plot twist, everyone downloading everything is what causes the internet to go down.

Honestly, thinking about this is just making me anxious, so I’m gonna stop doing that now.

But I’m curious – what would your answer be?