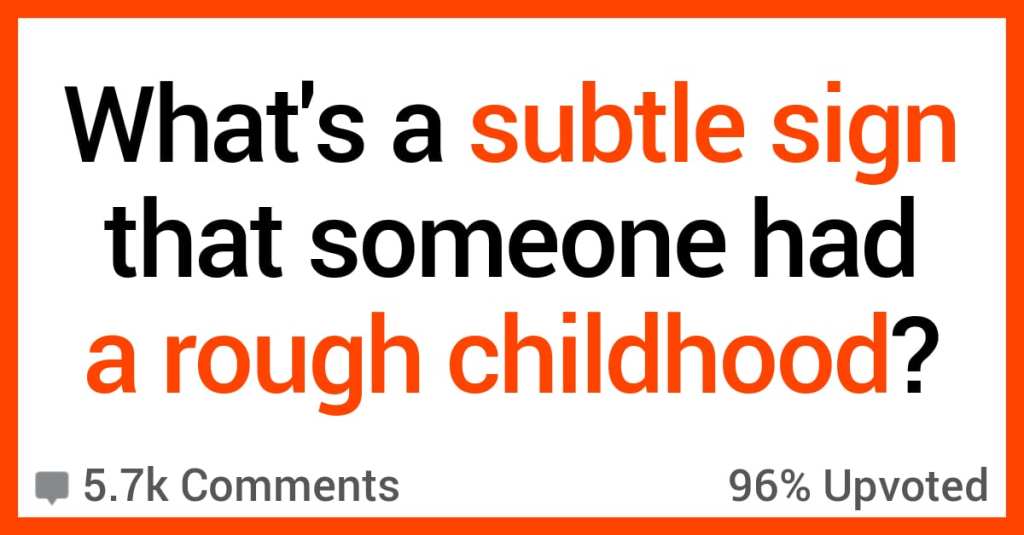 What’s a Subtle Sign That Someone Had a Rough Childhood? Here’s How People Responded.

You never really know what someone has been through or how they grew up unless they’re willing to open up to you.

But, there are certain things that seem to betray that someone had a tough upbringing if you pay close attention.

AskReddit users shared their thoughts about what they think are subtle signs that someone had a rough childhood.

I was verbally abused and mocked a lot as a child/teen, it hurt me a lot because it didn’t matter if I did something right or wrong I’d get yelled at for it, so I learned to have an excuse prepared just in case I have to answer for what I’m doing.

Even in my adult life I feel like I’m always thinking to myself ways to justify what I’m up to, even if it’s something as benign as why I put a dish away where I did. No one ever asks about the mundane stuff I do but I always feel like I have to be ready to defend myself.

It really sucks. I shouldn’t have to justify my existence.”

They’ve learned not to trust anyone to help them so do everything themselves.”

3. And the other side of the coin…

Have no confidence in themselves and their decision making abilities, or their judgements of anything.

Avoiding or refusing to do things on their own etc.”

“I remember going to summer camp as a kid and meeting Milo.

Milo was big on attention seeking and validation, and would take food from the cafeteria back to his bunk, like eggs and toast. I remember thinking he was just weird, but I think looking back and knowing what I know now, he was probably being neglected at home.

Thin as a rail and probably malnourished, so he wanted as much food as he could get, and just wanted someone to acknowledge him. Pretty sad stuff.”

“My sister in law adopted 3 siblings who are completely self-sustainable at a very young age. When they were visiting, I noticed a lot.

He knew their eating schedules and would nag my sister in law.

Offered to make them mac and cheese or noodles or whatever we have laying around. Promised to clean up after. He was 12 years old.

When “normal” kids play video games, they’re glued. This kid was constantly checking over his shoulder to make sure everyone was safe and if he felt one of his sisters was up to no good, he would put the controller down even if it meant dying or losing his progress in the game.

To elaborate on “up to no good” what the oldest brother considered bad behavior was pretty innocuous. There were several instances of things I consider normal childish behavior that he would regularly put a stop to. The most outstanding one was being too loud.

It wouldn’t even be yelling or screaming. Just typical 5 year old make-believe noises that would cause him to run over and tell the little one to keep it down.”

“They apologize habitually, compulsively, and for everything.

Even for things that have nothing to do with them.”

“I used to involuntarily flinch when someone around me moved or gestured quickly.

My parents were the masters of lightning quick punches that came with no warning.

Ends up ingrained in you that fast movements = get ready for a punch.”

“When things get tense, they move and breathe very silently and are hyper aware of everything that is happening and everyone else’s actions.

I find that they also read people very well, but still have poor judgement when it comes to close relationships.”

“Constant analysis of non-verbal cues. I spent my childhood trying to read tiny signals that my abusers sent, that were imperceptible to most people, but big red flags to me.

The problem comes when you assume that these signals apply to all people, not just the *ssholes. I’m triggered by things that my gentle and loving partner does, because my abusers sighed that way, or tapped his hand that way, or got that glint in his eye.

My partner is just trying to exist, and I read into everything that he unconsciously does. It’s hard for me to retrain my mind… But I’m working on it with a licensed counselor. I’ve spent nearly 4 decades of my life in flight or fight…. It’s good to be emerging from that mode.”

Meals are forced contact time in bad households and it can easily show. Some examples are becoming less talkative or withdrawn during meals, they realize their elbow is on the table and they jerk it away quickly, or something innocuous like a sneeze at the table causes undue shame or embarrassment.

Conversely, someone who grew up without parental guidance can also develop odd eating habits. In the case of a co-worker of mine, they collect the condiments near them. She would pull the ketchup bottle out of the little rack on the table, use it, and then keep it by her plate instead of putting it back.

I asked if she was done with it, and she said, “Oh, sorry. I ate a lot of meals alone growing up.” Turns out she grew up with a single mom who worked 2 jobs, and she was used to nobody being there to pass things.”

“Having the ability to function as their own parent at a young age.

Anything else that shows they had to grow up fast.”

“Boundary issues are common, but reactions still are an individual thing.

What helps to keep in mind is the 4F model of trauma responses: Fight, flight, fawn and freeze.

When you notice somebody’s reactions are easily categorized as one of those and it is a very persistent pattern, adverse childhood circumstances of some sort are a pretty safe bet.”

We love to hear your thoughts and opinions.