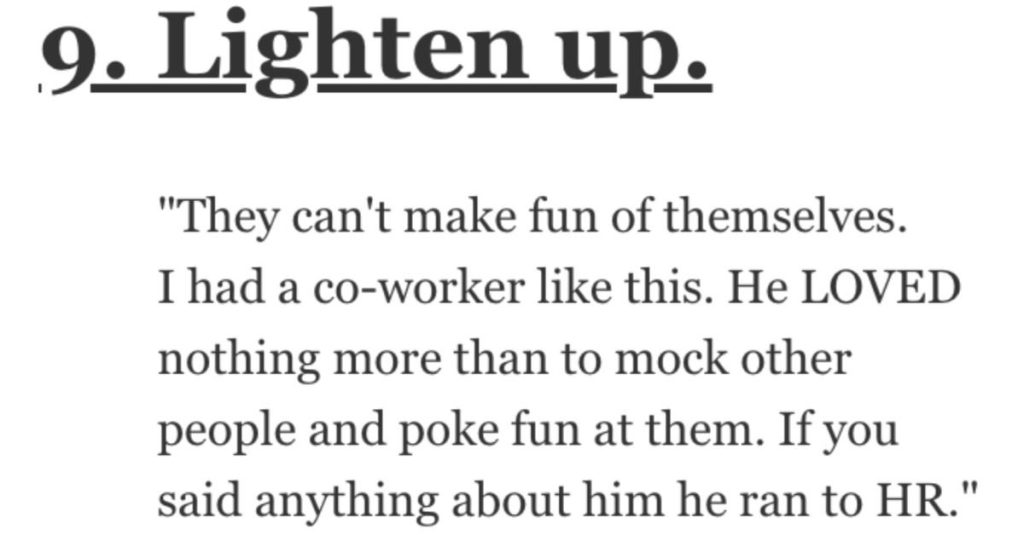 What’s a Sure Sign Somebody Is Deeply Insecure? People Shared Their Thoughts.

It took me a while to figure this one out, but at some point, I realized that people who have to be the center of attention at all times are actually pretty insecure.

But I bet you probably already knew about that one, didn’t you…?

What are some other signs of insecurity?

“Obsessing over hierarchies, or who is ‘ahead’ and who is ‘behind’ in life.

I mean he has really done well for himself compared to most others in our social group, and good for him, but I have my own insecurities about being one of the behinds and would love to not be reminded of this fact when I’m out trying to have a good time.”

You’re unstable and not fit for the public? Got it!”

We get it, you’re projecting.”

I’m 42 and only a couple of years ago realized hearing constructive criticisms is not the same as being attacked.

Trying every day to quit being so sensitive. I’m getting much better at it, and life is better.”

“Very specific but just thought of those people in the workplace who are constantly afraid of losing their position & carry a very passive aggressive attitude.

They also constantly gossip to other coworkers/higher ups about you behind your back, constantly nitpicking at little problems to make you look bad. It’s a sad, sorry defense mechanism.”

Constantly fishing for compliments and approval – e.g will speak poorly of themselves in hopes of receiving compliments.

People who speak poorly of others who are happy and enjoying life are also insecure IMO especially speaking poorly of people who have more money than them.”

“Overcompensating: Someone who is insecure may try to overcompensate by boasting or exaggerating their achievements or abilities.”

“Trying to justify every “mistake”, usually its minimal, but once you notice someone that does it, you just cant stop noticing it when they do it.”

“They can’t make fun of themselves.

I had a co-worker like this. He LOVED nothing more than to mock other people and poke fun at them. If you said anything about him he ran to HR so fast.

He continued to mock us all the time and he continued to pile on any time anyone on the team was being mocked for something but we were not allowed to say anything back to him. It sucked so bad.”

“The three I always look out for are:

A need to closely monitor the behaviour of others.”

It’s a quality that seems confident but in reality the underlying reason is usually that the interrupting person is just trying to prove something and has zero interest in what you have to say.”

“Throwing people under the bus.

Every time you think you got away with blaming someone else for your f**k up, you didn’t.

All it does is show the rest of us that we can’t trust you, and that this wasn’t a one-time thing, you’re so used to being incompetent that you have a workaround for it.”