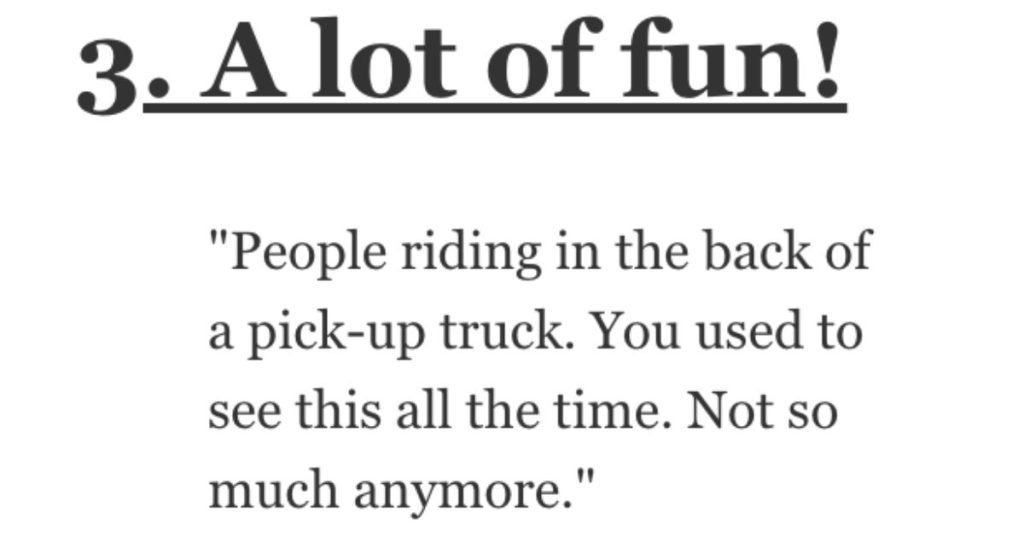 “Life moves pretty fast. If you don’t stop and look around once in a while, you could miss it.”

A certain fella by the name of Ferris Bueller said that and boy, was he right!

And it’s hard for us to even imagine what life was like 50 years ago with all the advancements that have been made in society.

“Out playing” used to be knowing where your kids are.”

And most of the time we sat in the back seat with no seat belts available.”

“People riding in the back of a pick-up truck.

You used to see this all the time.

Not so much anymore.”

“Watching an entire TV series at a time that’s convenient for you.

VCRs weren’t even a thing 50 years ago, so if your favorite show was on Wednesday at 8PM, you were either at home to watch it or you missed out on it forever.”

“Listening to the song you want to where you want to, rather than whatever is playing wherever you are.”

Some of us would cover ourselves with lotion that intensified the tanning!”

Machines were everywhere for anyone to use.”

They also didn’t go with them when the kids played at someone else’s house. Kids played with their siblings and the neighbor kids until they went to school and made other friends.

Then they’d call their friends, arrange to get together, and ask a parent for a ride over if it was too far to walk or bike.”

“D**nk driving was pretty much overlooked especially if you were in a small town.

A cop followed my dad home when he was wasted one night in the seventies.”

“Women having credit cards in the US without needing a man to cosign.

Growing up I was led to believe that having tattoos would limit employment opportunities.

Now tattoos are so common, I don’t think anyone cares.”

“A line of cars picking up kids at school.

In the 70’s you walked, road your bike, or road the bus, even the grade school kids.”

What do you think was normal 50 years ago but isn’t anymore?