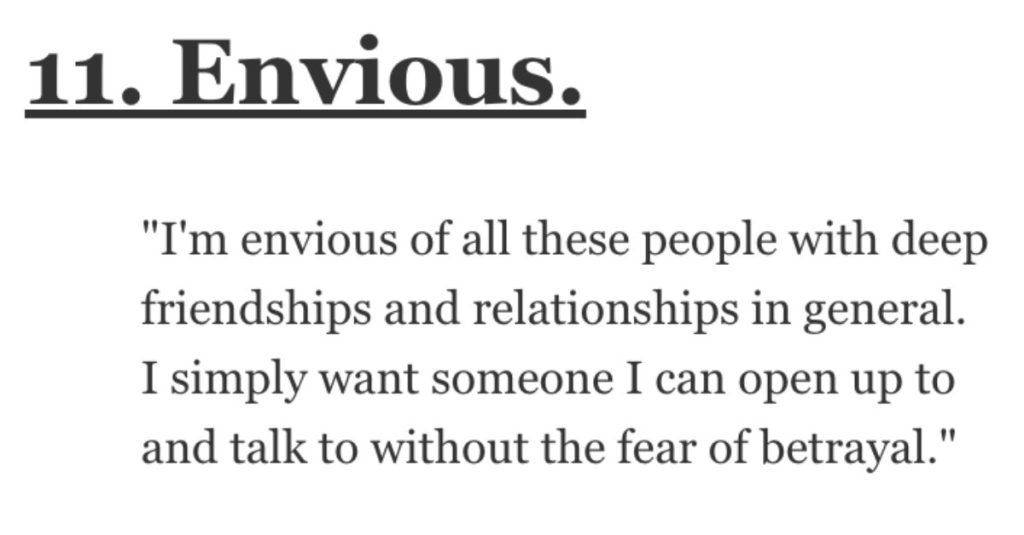 What’s Something You Want to Get Off Your Chest? People Responded.

If you don’t have someone to vent to, things that are bothering you can build up and eventually boil over…and that’s not healthy, ladies and gents.

So if you really need to talk to someone, this might be the place to let it all out.

But first, let’s see what AskReddit users really wanted to get off their chests.

1. Gotta turn it around.

“Gotten increasingly convinced I need to fix something about myself but not exactly sure what it is. Just noticing things are off.

Might be I hit one of those weird points in life where things have to change and yet it’s not exactly clear.

“I’m envious of all these people with deep friendships and relationships in general.

I simply want someone I can open up to and talk to without the fear of betrayal.”

“I wanted to be an architect or veterinarian.

I didn’t really comprehend the future but just figured it would be good. I’m nearly 40 and I’ve had no career and am unemployed and hating myself.

I think I’m too stupid for everything and I don’t understand how anyone becomes anything. It all seems beyond my reach. I don’t get how people DO this life s**t.”

“I know I have to get up off my a** in order to push myself forwad.

No I don’t have any motivation to move from my bed or to even get out of my room.

No I can’t explain why and using the “depression” card makes me feel worse.”

“I focused too much on my career that I forgot to keep up with friends.

Now I have a decent career but no friends.”

“I don’t know what direction my life is going and everything is weird now.

Things are not as I expected.”

What if it goes for the worse? What if I find out it’s a complete waste of time? I know I have to at some point and wasting time scrolling reddit commenting this won’t help but whenever the thought occurs, millions of possibilities enter my mind.

It’s not that I don’t want to change, I’m just scared it’s going to just get worse.”

I try to take selfies and all I can see is my huge nose. I thought I would be over this s**t by now.”

“I honestly feel like I’m outgrowing where I live, outgrowing some friends, and I’m also outgrowing my relationship.

“One of my ‘friends’ completly stopped talking to me out of nowhere for no reason that I know of. I’m still in the same group as her as I have litterally no other friends, but she makes it impossible to talk to others in the group who I think don’t mind me.

She quite litterally stands in between me and them when I’m talking with them, and there’s nothing I can do. Everyone else thinks that I’m completly fine and that’s there is nothing going on between us but there is. She’s just actively trying to get everyone to leave me and I feel like it’s my fault.

I know it’s just dumb school drama, but it sucks and just leaves me feeling hopeless and defeated all the time.”

“I’m almost 15 and was diagnosed with a form if depression by a therapist and medical therapist.

This was fairly recently (bout 2 months or so) but have been struggling ever since the start of the 2020 school year. I couldn’t do my work, so my grades were very low and some failing. I used have 95% or better grades so this was a change. Anyways I’ve moved to a new city for about a year from today and have made friends but have found them hard to keep in touch because I don’t have a cell phone.

Have been feeling left out and in lack of a life because they are moving on, getting GFs and such, while I’m stuck home playing games or something. My parents think I’m manipulating them for a phone by “faking” my depression (which makes me not feel naturally motivated) and being lazy. As a consequence for not doing much, they regularly take everything i have (like my Xbox and Amazon echo) which is about all I have.

We fight and argue almost daily and its been destroying me. I want to get better and move on with life but don’t see how. They also don’t want me to be put on anti depressants and so I’ve been feeling stuck.”

I feel like even my best friend is drifting away from me and that I’m not able to talk to her about anything anymore.”

Tell us what you’d like to get off your chest in the comments.