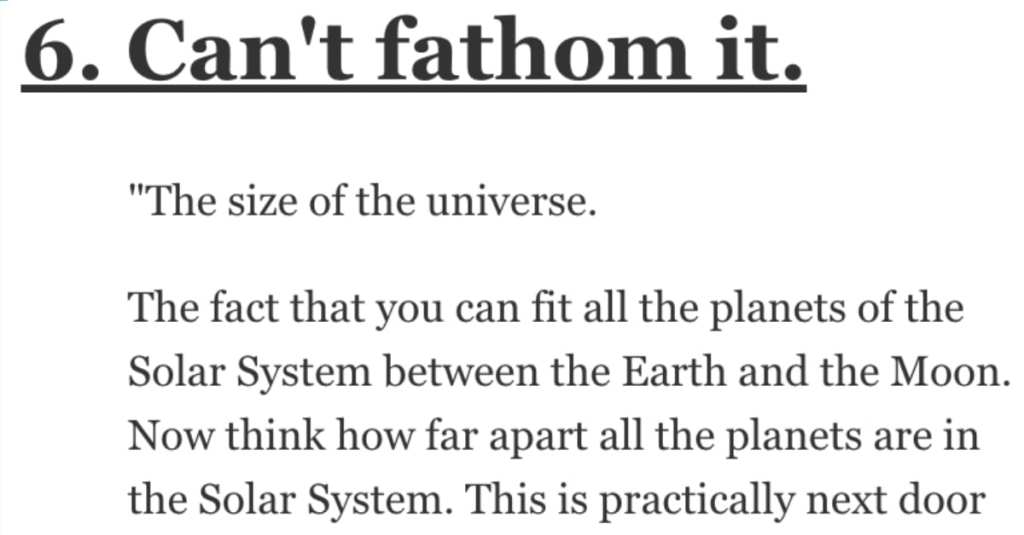 Maybe I’m not too bright, but as I’ve gotten older I’ve realized that there are tons of things that just make no sense to me.

Things about how the world works, how people behave, etc.

Does what I’m saying sound familiar at all…?

What’s something you can’t wrap your brain around?

Folks on AskReddit answered this question.

“The fact that there even is space…

Where the f**k did all those materials come from?

How did life develop out of nothing?”

“I can’t comprehend why any company would think I’m more likely to buy their product if they make their commercial 20db louder than all other commercials.

The fact that we all collectively decided separately and divertingly that certain sounds have meanings and that other sound mixed with those can change the meaning.

Adding onto what I said, sounds are just vibrations in the air that out brains interpret into the sensation of hearing. Really we’re vibrating the air at each-other and those air vibrations to your brain contain meaning.

When you think about it like this language is not too dissimilar to the internet in a way. Makes you realize how crazy and unique of a skill language really is, with-ought it we wouldn’t have a civilization.

Another interesting thing related to this is when people call your name. Even if your in a crowded area with hundreds of people talking around you and you think your tuning them out if you hear your name you immediately notice, Some part of your brain must be constantly listening.”

“How a simple calculator works.

I can do math. I’m actually very good at it.

How does a little plastic box do it though? Always boggled my mind.”

I am considered a historian by my family due to my knowledge on most world history, but god dang dates.

I could be talking about WWII and say it happened the same date as WWI.”

“The size of the universe.

There are billions of stars in our Milky Way (with the majority having planets of their own). The sheer scale of the vast emptiness involved means that even when our galaxy merges with the Andromeda galaxy in 4.5 billion years’ time, there will be very, very few actual collisions between stars.

Then there is the void between galaxies, and that it takes billions of years for light, at its speed (massless, and the fastest speed possible), to travel between galaxies, speaks of the sheer emptiness and distance in that void.

I can’t quite fathom it.”

“Light isn’t affected by time. So…other things could just exist outside of time?

Like, if you were a photon that traveled at light speed for a million years and then hit an alien, you’d experience it as instantly being a million light years away.”

“Why people vote for politicians who have a party affiliation without ever reading anything about them or their policies or political history and only picked them because of their party.”

9. Kind of a scary thought.

“There is no more water on Earth, Water is not created, it just gets moved around on this floating ball in space we call Earth.

All the water in the world that has been drunk, processed and excreted as p**s from every human and animal ever to have existed on Earth has eventually ended up in the sea, gets recycled and the process starts again.

A glass of water could theoretically contain particles that originated as p**s from Dinosaurs and Roman soldiers or Egyptian gods and slaves.”

“The fact that supposedly people can picture things in their head. When they close their eyes they can think about something and visualise it. Makes no sense to me at all.

If I try to visualise something I can state facts about the thing I’m thinking about (the ball is blue and fluffy) but I don’t see a blue fluffy ball. Apparently people could “see” that. It truly boggles my mind and I can’t believe it.”

It blows my mind that computers can calculate millions, billions, trillions of digits, but it hasn’t found a pattern yet.”

“How the sun can warm us and provide energy for all life on Earth from 93 million miles away.

And how millions of stars are orders of magnitude more powerful than that.”

“People with opinions that seem to not be based on any self thoughts or rationalization and rather on repeating what others say in some sort of group behavior.

Like one internet phenomenon I’ve seen lately is how people look at other people, not as who they are but as what their opinions about who they are is, so they will twist any action to fit that world view.

Seems bizarre to me”

In the comments, tell us what you just can’t comprehend.