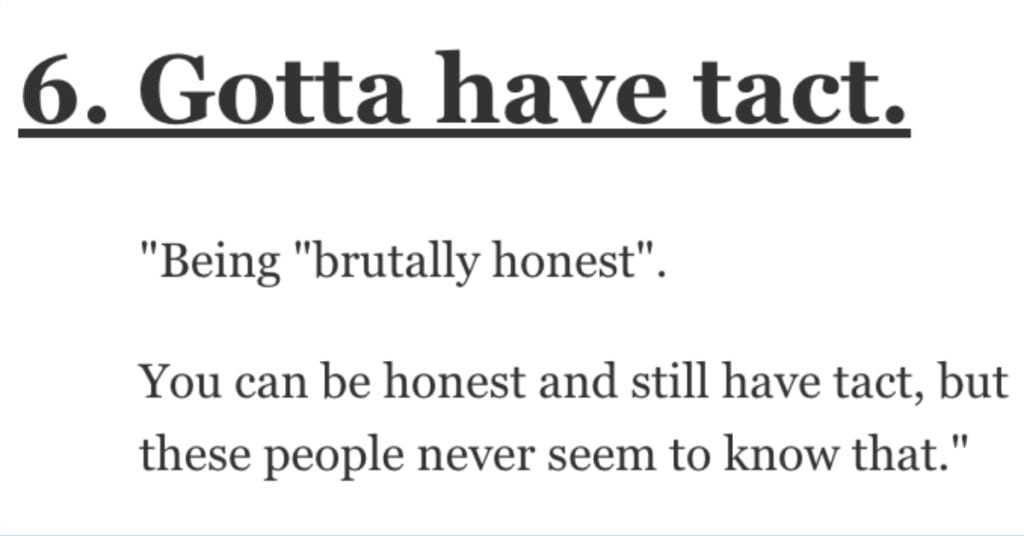 People can be pretty clueless, don’t you think?

They brag about themselves and some of the things like to boast about are things that are not exactly impressive.

You know what I’m saying?

Folks on AskReddit talked about traits that people really shouldn’t be proud of.

“I never apologize. I’m sorry, but that’s just the way I am.”

“I’ve found far too many people are proud of how aggressive they can be. I started noticing it in college.

There’s a certain type of socially awkward person who seems to feel that the angrier they can get in public, the more intimidating and impressive they are.

It’s really just secondhand embarrassing to watch a grown man or woman behave like that.”

Taco, spork, potato, cow, dolphin, avocado, squirrel. In my experience, all of the “random” people say the exact same words.”

“I’m on a birdseed and pigeon milk cleanse!””

You can be honest and still have tact, but these people never seem to know that.”

It’s more common than guys realize because it’s not as obvious as it is in the movies but a lot of girls dumb themselves down to act “cute” for guys.”

“When people consider themselves to be the deciders of what constitutes “good taste” not only for themselves, but for others.”

It’s fine in sports or academics, but when it’s just for fun then it makes the person look like they have anger issues. Like when me and my friends out playing bar trivia, this one guy always screams and bangs the table if his team gets the answer wrong.

He accuses people of cheating, argues with his teammates, and thinks he’s hot s**t too. Unfortunately, that guy is a part of our group… and it’s not so fun when he comes out.”

“I really don’t get why being an introvert these days is supposed be so awesome.

I scored 100% for introversion in the MBTI, but I don’t think that makes me some sort of special, aloof genius and I like people plenty.

All it means is that I kind of run out of social energy about an hour into a party, I hate to answer the phone, and I am the last person you’d want to ask if you’re interested in office gossip.”

“A person’s capacity to drink. I don’t think it’s something to be proud of.

Show me someone who has the will to drink just the right amount, now that’s impressive.”

“I don’t take any s**t” translates as “I will make a huge fu**ing issue out of things not worth getting upset over, and embarrass everyone around me”.

Nobody’s impressed by you throwing a fit over something an emotionally mature person would just shrug off.”

Sticking to your guns when you are clearly wrong is not a good thing, nor is refusing to budge on your position so that everybody else has to negotiate around you.”

Are there some personality traits you think people shouldn’t be proud of?