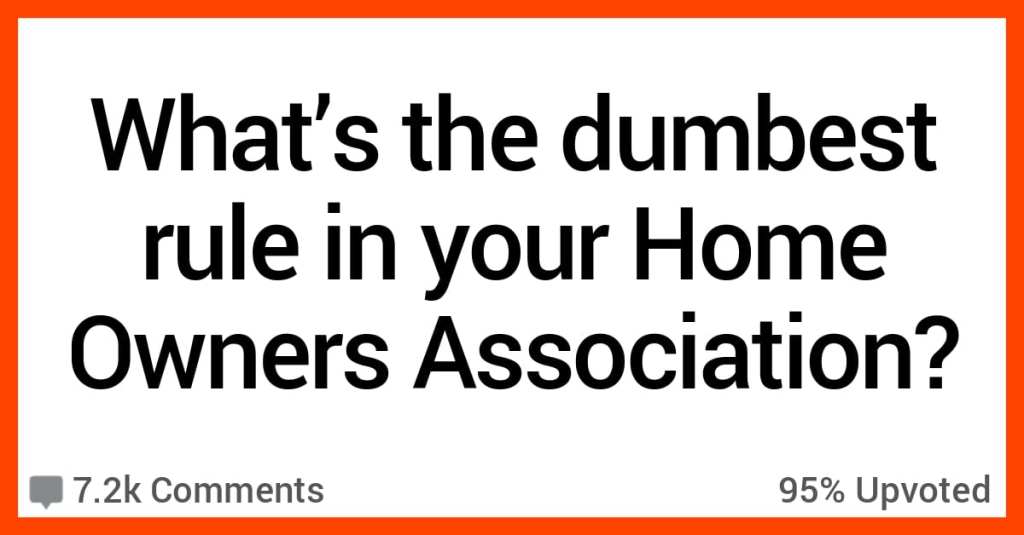 I guess I understand why Home Owners Associations exist, but some of them really seem pretty pushy. And I bet you already know that a lot of them have some pretty dumb and excessive rules.

But I guess you gotta follow the rules, right?

What’s the dumbest rule in your HOA?

Here’s what folks on AskReddit had to say about this.

“House in the neighborhood caught fire.

Luckily everyone was okay (they had small children), but the fire burnt a hole in the side of the house.

While waiting for it to be repaired, the family covered the hole with a blue tarp to prevent rain from getting in and causing more damage.

HOA fined them because the tarp was an “eyesore.””

“The worst place was actually when I lived in an apartment in a town that didn’t allow overnight parking.

I had to park like 1/4 mile away in a municipal lot but had to have the car moved by 830am. Overnight guests had to be reported to the police so they didn’t get ticketed.

When I busted my knee and was on crutches, I had to get a letter from my doctor faxed to the police dept in order to get special permission to park on the street near my place overnight.

After having to play “may I have an overnight guest” with the police, an HOA would have to be really nasty to be worse than that…”

“My parents’ HOA is stupid strict.

Can’t have any holiday decorations up past the first week of Jan. My mom pulled a Clark Griswold and broke her ankle falling off a ladder putting up decorations before the holidays so a wreath was left on the front door longer than allowed. They got a letter with a picture and a threat of fine.

A few summers later they and some of their neighbors decided to stick it to the man. They got a flock of plastic lawn flamingos and planted them in one of their yards.

Whenever the HOA would send a letter the flock migrated to another yard. Kept it up for about a month and a half.”

“The fences on your property must all be the same color, and match the adjoining fences of the neighbors property.

I was in the middle of the row and had a shared fence with both neighbors, that each each had their own color. I got a violation notice the same week I moved it.

If I painted my fences to match each other, at least one of my neighbors wouldn’t have matched theirs on the other side. This would have sent a cascade of violations down the street.”

5. Can’t park in your own driveway?

“No parking in your driveway. Vehicles had to be kept in your garage.

No satellites. It was cable or nothing.”

“Not allowed to park pick up trucks in the drive way with two exceptions: the Cadillac EXT and the Lincoln Blackwood.

These were described as luxury vehicles.

The HOA president also drove an EXT so he basically exempted himself from the rules.”

“Everyone in my neighborhood was fined for having “dirty roofs.”

Seriously, they claimed that everyones roofs were dirty and made the neighborhood look bad. It’s not like they were covered in mold or anything, hell idk how a roof is even dirty but 268 of the 284 houses in my neighborhood were fined $75 for it.

We found out later that the HOA president started a power washing business and likely just wanted to drum up some business. He was impeached because of it and none of us even paid the fines.”

“The first month in our townhouse, we got a notice that we had not mowed our lawn and were in danger of being fined.

We didn’t have a lawn.

The entire yard was covered in topsoil, seed, and straw. The “lawn” turned out to be a single weed that was growing up in the shade of a bay window.

I didn’t pull it. I tied it to a stake and told them it was our garden.”

“We have a landscaping committee.

If you want to plant flowers, they must be approved by the committee before you plant them.”

“This is stupid for how we were asked to handle it….

HOA covenant says trash cans can’t be visible from street. We keep ours at the side of the house like half the neighborhood. You can only see them if you follow the outer edge of the cul-de-sac and are really trying to look for them. And of course that traffic is minimal since it is a cul-de-sac.

Management company told us put them in garage or behind house. I opted for behind the house where the entire f*cking neighborhood can see since we back up to the main road into and out of the neighborhood.”

“In my neighborhood, we are not allowed to have blue trampoline covers.

They must be green or black.”

“I have hedges in the front yard. There’s dirt under them because you know, plants grow from dirt.

HOA comes by and says we absolutely can’t have any exposed dirt, including under the shrubs. I didn’t even know what I was supposed to do about that?? I just poured mulch over the dirt under the shrubs.

They haven’t said anything so I think that was the right thing to do. It definitely looks sh*ttier than just the plain dirt.

Wildest thing is that it was just the dirt under the shrubs for a literal decade.”

Do you live in a neighborhood with weird or wacky HOA rules?