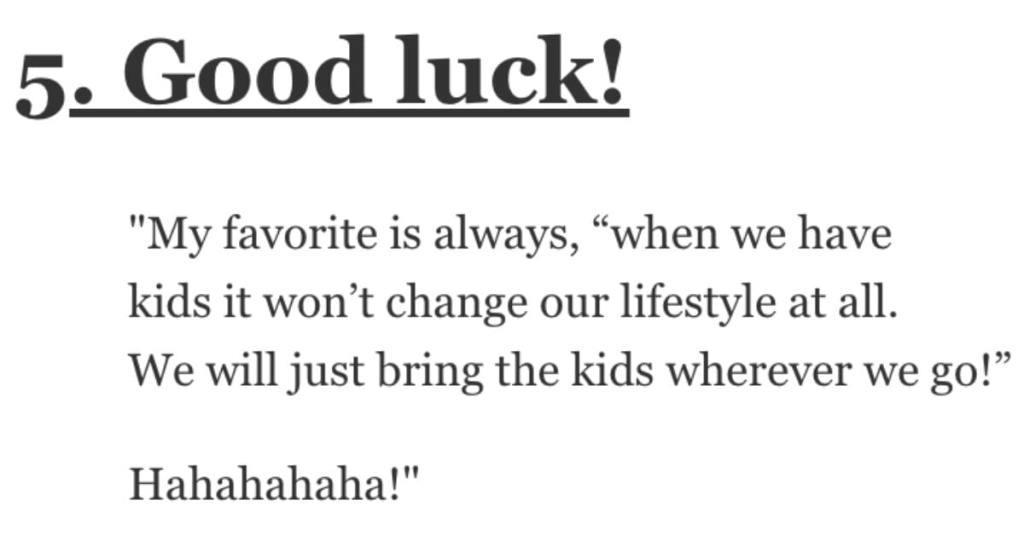 I feel like I’m a pretty well-rounded person and can discuss a lot of topics with folks, but there’s one thing I never, ever dare to open my mouth about because I’m 100% clueless about it.

I’m talking about PARENTING. I don’t have kids and I’m not even gonna pretend I know the first thing about raising kids.

And you shouldn’t either if you don’t have children!

“When I was on maternity leave, my boss at the time called to ask me if I can write an article for our website.

My baby was 2 months at the time, latched to my bo*b permanently and crying inconsolably whenever not either breastfeeding or being rocked.

When I told my boss I have to hold her all the time, the response was: “Ok, so hold her with one hand and type with the other one.””

“I was getting a passport when my daughter was 3 weeks old.

I was getting one for her too, and the man said that I couldn’t hold her, that she needed to sit up on her own. Mind you, my baby was also a month early and at 3 weeks she weighed 6 pounds and was 18 inches.

He literally argued with me that I couldn’t hold her for the picture, and stormed off to get a manager. How the heck is a preemie 3 week old going to sit up for her pictures ??”

“While I was pregnant I was spending some time with a friend who had no children yet.

At one point I realized my baby hadn’t moved as much as normal and I voiced my concerns to my friend saying I might need to go and get checked over. She said “Can’t you just tell the baby to move with your mind?”

Like she thought babies and mothers are somehow telepathically linked and genuinely thought that I could make that happen. I couldn’t help but burst into laughter and then my baby started kicking away again.

He must have found it funny too!”

“When I was pregnant I couldn’t sleep wel because every position was uncomfortable (I also have arthritis).

A friend said: “You probably cannot wait to give birth so you can catch up on some sleep!””

“My favorite is always, “when we have kids it won’t change our lifestyle at all. We will just bring the kids wherever we go!”

“When working on our baby shower registry my husband couldn’t understand the need for, 1. Strollers (“I’ll just carry my babies”) and 2. Baby monitors (“if my babies cry I’ll just go check on them”).

What makes it even funnier is that we were having twins.

He now sees the error in his ways.”

“My favorite is when friends used to hit me up at like 7 at night asking me to come out THAT NIGHT.

And would then be shocked I couldn’t just “get someone to watch the baby”.

“My sister, who has no children, visited once and scolded me for letting my children take the couch cushions off the couch and make a fort.

That is like the last thing I am worried about having 3 kids under 7.”

9. The one that thankfully got away.

“This one was from my ex who I should have know would be a terrible parent.

In the hospital, I just had a baby and was struggling to breast feed. I went to the washroom and when I came out my ex was feeding my newborn applesauce. FREAKING APPLESAUCE. She was only hours old and 4 weeks premature.

Also he told me that I needed to wait for my 5 month old to calm down and self sooth before I fed her her bottle because when a baby cries when they are hungry that’s how they manipulate the parents.

“I always love it when people suggest something that boils down to “just try and reason with them”.

I’m like, there’s no point in trying to make any kind of rational argument with a young kid, especially one that is in the middle of a tantrum. Kids have big emotions over things that to an adult seem silly, but to them, it’s huge.

You gotta wait it out. They’ll tire themselves out and when they do, you can have a little chat with them and ask them “do you think that was an appropriate level of anger because there was less ketchup on your hot dog than your brother’s?””

“My 22 year old brother telling me that instead of nursing my baby while we are together because it weirds him out, I can pump enough beforehand and feed bottles and then baby will be good all day.

I explained that if I miss a nursing session then I would be really uncomfortable and have to pump during that time anyways so I usually only pump when I’m away from my baby.

“A thing I said before I had kids. “I feel like parenting is easier than most people make it out to be.”

Said to my old boss with 2 kids.

She laughed so hard she almost peed herself and then put that quote on her bulletin board to remind me when I had kids.”

In the comments, tell us about the ridiculous things you’ve heard from people without kids.