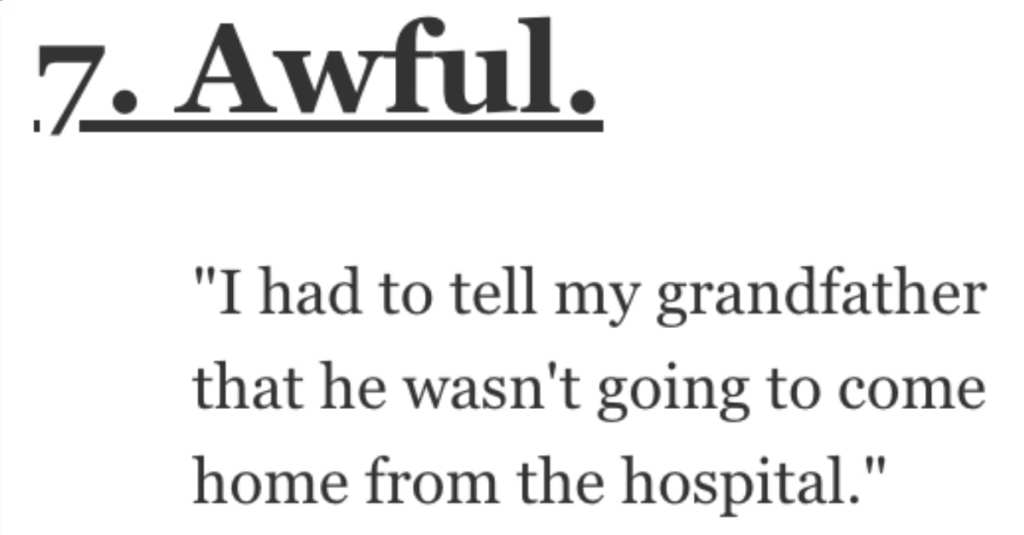 What’s the Hardest Thing You Ever Had to Tell Someone? Here’s What People Had to Say.

Delivering tough news to people can really test an individual.

And it’s hard to strike the right tone in these difficult moments when you know you’re about to ruin someone’s day and potentially alter their life forever.

And I think we can all agree that it is not a pleasant experience.

What’s the hardest thing you’ve ever had to tell someone?

“When I was 14 I had to call my mother and tell her my eldest brother committed s**cide.

My dad could not call her because they were divorced and she had blocked him.”

“Telling my parents I was a her**n addict. I was in an abusive relationship and hard into drugs and worried I would die. I needed help.

My dad sat with me through the entire withdrawal and I’ll be 10 years clean this November. I tell him all the time that he saved my life.”

“I had to (separately) tell my two young boys, my sister in law, and mother in law, that my wife (their mother/sister/daughter) had d**d.

It’s been over three years and thinking about it is still devastating.”

Had to tell a family on Christmas Eve one year that their baby was d**d.”

“Calling my mom to tell her my father d**d of cancer.

He had Alzheimers and I was the one who was staying with him that night (he had to be watched 24/7 or he would escape the hospital).”

“Had to tell my friend’s ex-GF why he had a closed casket funeral.

He stepped in front of an 18 wheeler on the highway.”

“I had to tell my grandfather that he wasn’t going to come home from the hospital.”

8. Regret to inform you…

““The Secretary of the Army regrets to inform you…” to a Vietnam vet whose son had just d**d in Afghanistan.

Then having to give the same speech to the kid’s mother who was chain s**king and bawling her eyes out because the dad called to tell her before I got there.”

Growing up my parents fostered. Just before I moved out we looked after 2 kids under 5. I was reading him his bedtime story and out of nowhere he just said ‘I don’t have a mummy. Can you be my mum?’ in this teary voice.

Both siblings have a really happy home now but I went to bed teary eyed that night.”

The last time they saw each other was not a good visit and I think our dad really regretted treating him badly, but now reconciliation was no longer possible.”

“Had to tell my 3 year old son that “mommy just forgot. She still loves you,” after the rotten b**ch showed up and only picked up my 5 year old daughter ON HIS 3RD BIRTHDAY which was also her “every other weekend” (I have primary custody)…. they split and she took my daughter to a f**king fair. Rides cotton candy the works.

My family got together on 3 hours notice to throw him an impromptu bday party to distract him. Thank God for them.”

“Had to tell my mom my brother had been k**led in a one-car automobile accident.

Had to talk her gently through it several times over about a week, because she just couldn’t process losing her son.”

” Working in management at a nursing home.

I had to call the family member of a resident with dementia and let her know that the resident’s caregiver was witnessed slapping the resident across the face. Apparently the resident was resisting care and that was how the caregiver decided to respond.

I don’t know if it made it harder or easier that the daughter said it was ok and she didn’t blame the caregiver because she knew how difficult the resident could be.

It was hard, heartbreaking work but I gave it my all until I realized it was a losing battle and upper management would never make the changes they needed to to be able to provide the care people deserved.”

In the comments, tell us about the hardest thing you ever had to tell someone.

We look forward to your responses.