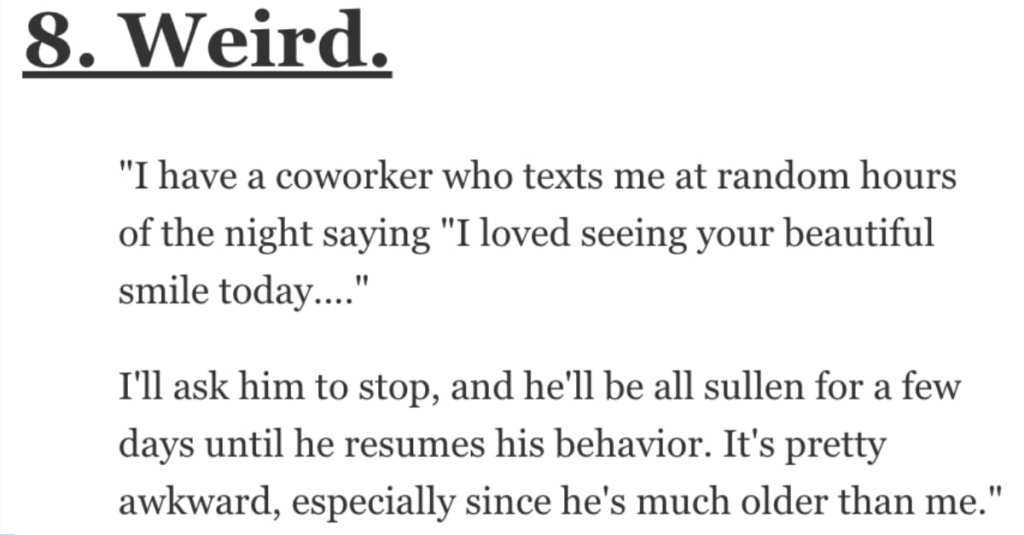 What’s the Most Awkward Way You’ve Seen Someone Try to Flirt? People Shared Their Stories.

Some people got game and some really don’t.

Do you ever watch people try to pick each other up in bars or clubs? It’s pretty painful most of the time!

Folks on AskReddit shared their stories.

“I saw a freshman try to flirt during my colleges welcome week. Our freshman dorms are high risers (think 18 and 22 stories).

It was the biggest train wreck I had seen in a long time. The girls just left. The poor guy was just looked confused.”

“Our dorm sponsored a day at Magic Mountain and I caught a ride with a few guys I didn’t know all that well. Leaving the park that night a car full of girls asked us to meet them at IHOP (guy sitting in passenger seat was frat-tractive).

We did so and our driver, who was definitely not used to this kind of attention, decided to impress the ladies by doing back flips in the restaurant. The first time it was met with “did he just do that?!?” giggles and claps. The second time it was “OK, buddy, enough is enough.”

He did this a dozen times. The last few, when he was sweating and no one was paying him any attention, were so difficult to watch.”

“A Geek man was trying to impress me, and it sounded like he delivered this line often.

“You see, I’m like Mel Gibson… I know what women want.”

With the cheesiest smile, followed by a “but I’m not as handsome I think.””

“A guy I know met his girlfriend at a party using the following line.

They were talking and she said “I’m thirsty, I’m going to grab a drink”.

Then he replied “I’ll be your drink” and then they made out.”

“A guy rubbed my friend’s stomach and said “This is where I want my baby to grow.”

“I’ve seen a guy crash the conversation of two people who seemed to be enjoying talking to each other, and derail the conversation with talk of extreme poverty he’s seen around the world until the girl walked away.”

“When we were 16, a friend of mine always wore this big, long, brown leather coat. Awful-looking, it was.

There was this girl he liked and, lacking the necessary nerve to strike up a conversation with her, came up with a fantastic plan.

So one day he comes in wearing his big leather jacket. It was a lovely early summer day, and the girl of his dreams is sitting with a crowd of her friends, watching the cooler guys play football.

My friend walks up in front of the girl and her mates and does a loud, theatrical clearing of his throat – ‘AHEM, HEM’. All eyes are on him. I wonder what will happen next.

My friend pulls open his coat, holding it open like some sort of park flasher, and safety-pinned to the lining of the coat are a bunch of pieces of paper which read in heavy black marker ‘YOU ARE LOVELY, LET’S GO OUT?’

My friend doesn’t say anything, he just stands like that for what seems like an eternity, the confident smile on his face being replaced by a look of utter terror. The object of his affections says nothing as her face turns beetroot red, her friends sniggering. After a very long time, my buddy just runs away, mortified.

The next day, the entire school knew about it and he never wore that brown leather coat again.”

“I have a coworker who texts me at random hours of the night saying “I loved seeing your beautiful smile today….”

I’ll ask him to stop, and he’ll be all sullen for a few days until he resumes his behavior.

It’s pretty awkward, especially since he’s much older than me.”

Suddenly, a known neckbeard comes up, sits down in her booth, holds up a cloth to her face, and asked “Does this smell like chloroform to you?” She didn’t really understand and just said “…what?”, but was visibly (and understandably) creeped out.

He didn’t really know what to do, so he awkwardly sat there for a few seconds and then just left.

It was physically painful to watch.”

“I used to work drive thru cash register/handing out the food at a fast food restaurant.

One day, this creepy dude pulls up to the window and is straight ogling me as I take his cash. He had just $1 in change, so I handed it back to him. A few seconds later, I hand him his bag of food and tell him “thanks, have a good one!” He smiles. I close the window.

A few seconds later, he knocks on the window. Alright, maybe he wants ketchup or something. Nope. He hands me back the single dollar bill. He says, “You deserve this for looking good, sweetheart.” Creepy smile plastered on his face, he drives away.

“When I lived in NYC I met this guy we called Dancin’ Dave. there are several stories about this guy, but one that fits the topic is the night he ran across a bachelorette party.

Dave would get drunk after 2 beers. We show up at this bar/club on the lower east side and he immediately orders 2 beers and slams them. He then rips off his fleece to reveal a freshly washed white t.

Just as he turns around, he sees the group of girls in the party and starts to dance over. He gets in the middle, does some pointing moves, some booty drops, then kind of settles out dancing with one of the girls.

My roommates and I are loving what we are watching. We see that they are talking and she is laughing. Thank god, because you either get weirded out by dancing dave or love him to death. As the song changes, he hears a familiar tune sang by the Black Eyed Peas and he just couldn’t stop. He dropped to the floor and grabbed her ankles.

One hand on either ankle kind of holding her there. He looks up and yells “I GOT YA ANKLES!” She then laughs, and frees herself from his creep lock and goes back to her friends. Dancin’ Dave comes over to us and say’s he thought everything was going great. We were like wtf, dancin’?! what did you do?! “I grabbed her ankles” he smirked.

It was from that point forward I knew I would never grab a girls ankles.”

Have you ever seen someone flirt in a really awkward way?