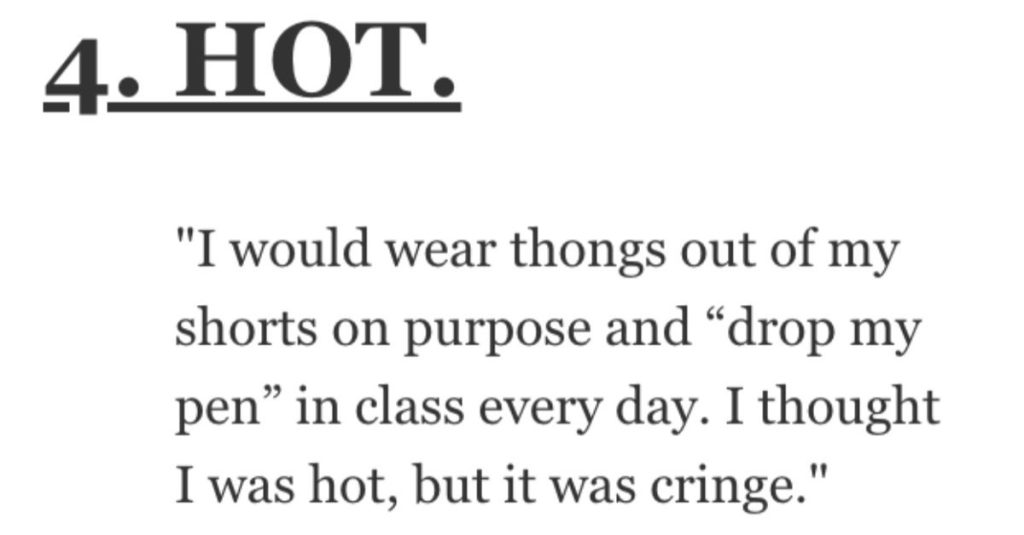 What’s the Most Cringeworthy Thing You Ever Did? Here’s What People Said.

Can you pick just ONE cringeworthy thing you’ve done in the past that continues to haunt you?

But enough about me!

Let’s hear from AskReddit users about what still haunts them!

“I used the jacuzzi jet to m**turbate in public pools thinking that nobody knew what I was doing.

I literally want to shrivel up and die when I think of it.”

“When I was in 6th grade, I wrote a note to a classmate that I had a crush on.

We’ll call him M. I was embarrassed to give the note to M so I asked his friend (we’ll call the friend D) to give it to him.

Turned out that M just wanted to be friends but fast forward several years… I married D and we have 4 children together.”

“Last week we had a zoom call and I was the First to enter, I was listening to music but I muted it not realizing I’ll be muting all sound.

I changed tab and texted a friend, did all sort of things I do when nobody is watching (talking to myself? Smelling my armpit? Putting my finger in my ear and checking out what I got out?

Having conversations in my head including facial expressions) until I saw the desperate texts from my colleague saying: YOU DONT HEAR US! I think I went gray – everybody was laughing and didn’t tell me what I did.”

“I would wear thongs out of my shorts on purpose and “drop my pen” in class every day.

I thought I was hot, but it was cringe.”

“2 months ago we were at a restaurant abroad. The waiter wasn’t on his best game and kept forgetting what we had while also having a heavy accent – almost a speech impediment.

One of the guys asked “why does he talk like that?” I said well he seems to be impaired in some way. Nobody else said anything – when the waiter came back he other guy asked where’s he’s from and turns out the waiter is from a remote indigenous region – hence his strong accent.

I tried to cover up by saying well maybe he still has an impediment. Nobody said anything again – I know I am being a sick but too embarrassed to safe it.”

“Two years ago my ex took me to a trip in the mountains with his friends. We were drinking and having fun – one of the guy’s partners and I started talking but it became the center of attention for some reason.

I don’t know why – and I don’t know how we got to the point that I suddenly asked her how old she was – most of us were 30/31yo and she said she’s 38- I didn’t expect her to be this much older than her partner and us so my brain decided to make this incredibly awkward and uncomfortable by just looking in shock at her and saying “aw ok wow you’re old”.

I still feel deep shame about this. Especially because now I am dating a guy lots younger than me and I fret for his friends to make comments.”

“10 years ago at a festival a guy I knew approached me with a lady who could be his mom (in my eyes). He introduced us and said this is his girlfriend.

I was so surprised that I just stared at her in silence and made her feel uncomfortable.”

“Meow around my friends and act like a cat because I wanted to be a Neko.

My friend one day told me to stop with a firm tone and that’s when it clicked to me to stop bc I didn’t wanna be ostracized and lose friends.

“Just the entire way I handled my break up with my ex- I was 24 but I was so melodramatic and cringe.

It would have been better for us all, and an ultimate power move to just accept it and walk away. Especially as I desperately wanted to remain friends!”

“I was new at a job and a rather dashing colleague asked me “So, how did you come to us?”

“Accidentally kicking my crush in the balls trying to show him that I was a cool chick who was into Jackie Chan movies and fighting games.

It was hard enough he immediately dropped to the floor like a sack of potatoes and whimpering. He spent the rest of the party in bed with an icepack between his legs while his sister death-glared at me and refused to even let me apologize to him.

He avoided me until graduation.

Sorry about your balls, Ian!”

“My Snapchat days. I’d post so many stories and it would be the cringest things.

I was such a “pick me” girl back then. I cringe every time I think about it now.”

What’s your most cringeworthy story?

Let us know all about it in the comments.