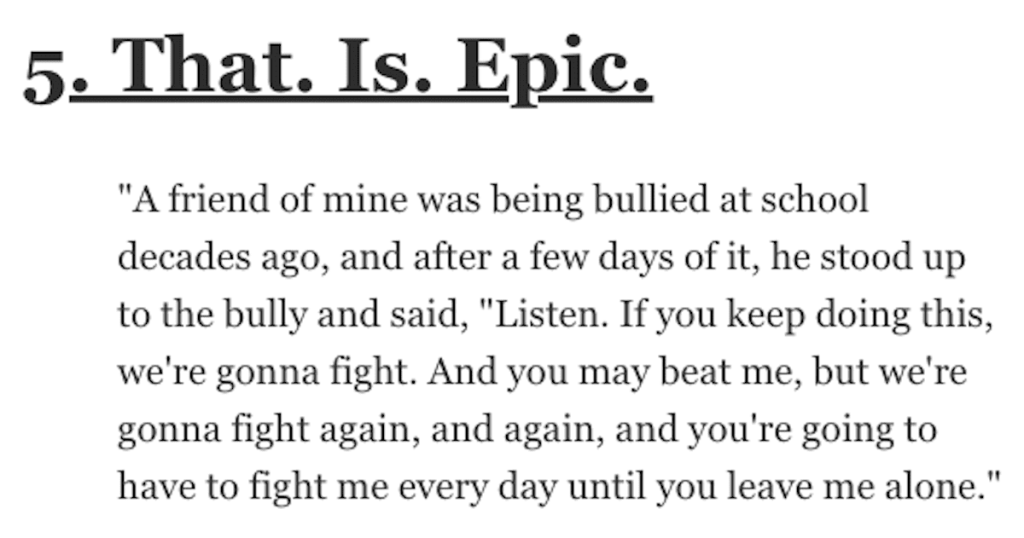 How Did You Get a Bully to Never Mess With You Again? People Shared Their Stories.

Having a bully is the worst…and I think most of us have had to deal with one at some point in our lives.

You think the bullying will last forever, but eventually, being tormented ends for some reason.

Let’s hear from folks on AskReddit about how they got their bullies to never mess with them again.

“Hid behind a corner and punched him in the stomach.

He eventually became my best friend too, so go figure.”

Got expelled 2 day, but i’m really happy I did.

I don’t remember him bullying anyone else after this.”

“Vomited all over him.

After that he never messed with me again.”

My cousin started dating his (“The bully’s”) sister and I guess he didn’t like that. So he came after me.

It escalated more and more to the point we nearly threw down in the middle of class one day, but the teacher stopped us. She made me stay after class and talked me down, saying she knew he instigated it and I wasn’t the problem, but she couldn’t have this exploding in her class again. Which I felt was fair of her.

A couple days later as I was getting stuff at my locker, he was standing behind me when I turned around and slapped my books out of my hand and said “Let’s go!”

I rolled my eyes at him, held up a finger and said “Just a second”

I then turned around and started hitting my head against my locker. The great thing about an empty steel locker is that you don’t have to hit it very hard for it to make a big sound. So while I was really not hitting it that hard, to him, it looked and sounded like I was just wailing on it.

After a few of those, I spun around and screamed at him to come at me.

His eyes went wide and he just backed away slowly in front of everyone in the hallway. And never messed with me again.”

“A friend of mine was being bullied at school decades ago, and after a few days of it, he stood up to the bully and said, “Listen. If you keep doing this, we’re gonna fight. And you may beat me, but we’re gonna fight again, and again, and you’re going to have to fight me every day until you leave me alone.”

The kid left him alone.”

“My best buddy, Sal, was a little guy that kept getting picked on. I was one of the biggest, strongest kids in my school.

My other buddy, Roy, was also one of the biggest, strongest kids in the school. One day Roy and I waited outside a classroom for Sal and saw his bully picking on him. Roy and I had a “conversation” with that kid.

The kid walked with a limp for a week and never even talked to Sal again. So, Sal just had big friends, but that worked for him.”

“I always punched my bullies square in the nose.

Sure, they may kick my a**, but I was more than willing to dish some pain out while receiving it. After a few times, they went after targets that didn’t fight back. They want easy control, and they’re just as afraid of pain as you are. Every new school was another bully.

Let one person walk on you and everyone will walk on you, either make boundaries or be a doormat. Don’t be afraid of consequences, that’s how bullies keep you in control; just start swinging.”

“Kicked him in the nuts quite v**lently.

He wasn’t really my bully so to speak. I was just an easy target and just hit my boiling point on that day. I was being held from behind.

The moment I was released I turned around and delivered the hardest kick I ever did in my entire life. Shame I couldn’t do the same to someone else who tormented me for a good 2 years…”

“When I started inner city public school I was fluent in German, made pottery, played classical violin and piano and was at least five years ahead of everyone in my class in math. I didn’t even know what was happening when someone started pummeling my face.

Fast forward two years. A guy said he was going to kick my a** after class. I waited until just before the bell rang, walked over to him in front of the whole class and the shop teacher yelling at me to sit down because it wasn’t time to leave yet and smashed his head into a shop vice and knocked out four of his front teeth.

I became a product of my environment. Garbage in, garbage out.”

“Challenged him to a fight. I didn’t think it would happen.

He showed, and it was only after he landed a couple of punches did I get pi**ed off and started really fighting. Punched him in the face, and he got mad because he thought I damaged his braces.

Cop showed up. Took me home. My parents not only told me they were proud of me for standing up for myself, but they told the other kid’s parents to pound sand when they called about the braces.”

“Well first I grew several inches and put on 35 pounds of muscle. Next time he gave me s**t, I challenged him to a fight after school.

He didn’t show, and never bothered me again. Probably a good thing, he was still bigger than me.”

“After years of mental and sometimes physical a**se from this girl and her followers I was depressed, angry and occasionally s**cidal.

She and her group were torturous to quite a few kids. I wanted her to stop. I stole a pen that was a novelty pen from her that she loved showing off. Specially made and had her name on it. Also stole a small sparkly journal from her backpack as well. I made sure to steal some of her homework from the trash cans occasionally. She had some writing in it.

General teen girl stuff and try en things about how stupid she thought some people were and how easy it was to make fun of them. I practiced her handwriting for a bit then I wrote down a pretend kill list (with my own name at the top), plans of how each one could be done, little confessions about hurting animals, generally screwed up s**t.

I read a lot as a kid and got some good motivation from many of my books. Then I wiped the cover and pen off and tucked the pen into the spiral binding and left it in the basket under her desk for the teacher to find.

Let’s just say the school didn’t believe her when she said she didn’t write those things. She got expelled which made me feel warm and fuzzy.”

Did you ever have to deal with a bully?