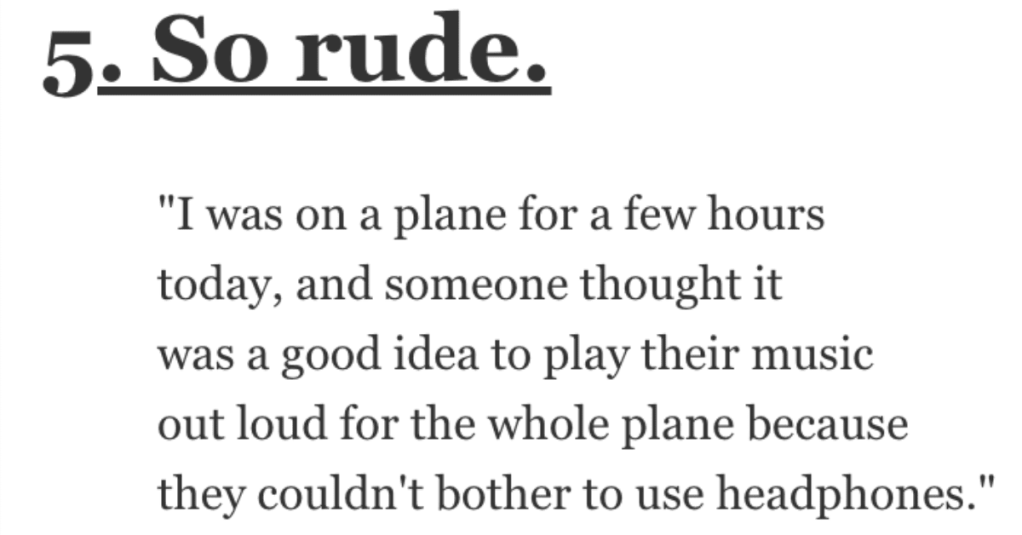 What’s the Most Entitled Behavior You’ve Ever Seen. People Shared Their Stories.

Doesn’t entitled behavior just drive you up the wall?

I really can’t stand it!

But, as you already know, you still see it everywhere you look because, honestly, people kind of suck.

What’s the most entitled behavior you’ve ever seen?

“A couple of years ago I had a study group going for a college course.

We were usually together for a good 3 or 4 hours, so it was pretty common for someone to volunteer to go get food for everyone, and since they were the person getting us food, we would all kick in a little extra so that the person getting the food didn’t have to pay for theirs. Colloquially, “If you fly, I’ll buy.”

So one day one of the girls in the group announces she’s going to Dunkin’ Donuts about an hour into the study session. I look up and say, “Ooh, I’ll buy if you fly,” and she looks at me like I’ve grown an extra appendage and scoffs, in this really disgusted tone, “I don’t bring food to other people. Servants do that.”

Keep in mind, we’d all been doing this for each other for weeks now. She knew it was a thing. I was completely floored.”

“I went to a state fair one time a few years ago and saw this young mom and her young son (looked to be around 4-6). He had a stuffed animal that looked pretty worn out, so you could tell that the son had it for a while now.

Another mom and son walked up and were about to get on the same ride that the first mom and son were getting on. Boy places his stuffed animal on a bench so he can go and grab something from one of the stands, and the other boy goes and takes it. Both moms saw it, and the mother of the boy who the stuffed animal goes to try to take it back for her son.

Entitled mom yells at her saying stuff like “If he found it he should keep it” and “Your son shouldn’t have been so careless.” I’m disgusted at this point. The mom says to the entitled mother that her son had that stuffed animal his entire life, it belongs to him. Entitled mom says “You can just get another from one of the stands, it’s not a big deal.”

The boy who the stuffed animal belongs to sees the other boy misusing his stuffed animal (throwing it up in the air, letting it drop, etc) and starts to burst out into tears. Not like an entitled child crying, but as if his heart was just completely broken, he wasn’t screaming crying, just a small sob.

This was my breaking point. While the entitled mom wasn’t looking, I told her child, you should give this back, I took the stuffed animal (not by force of course), and I dusted it off, then gave it back to its rightful owner.

Entitled mom sees me give it back to him and starts screaming at me, saying I abused her child, and she would be pressing charges, I distract her long enough for the other mom to realize this was her time to escape. After seeing that the family had gotten far enough away from sight, I just simply left my and the entitled mothers conversation, while she was talking too.

I am the stuffed animal vigilante now.”

“Sat behind a 13 yo kid playing a video game on his phone with loud volume. The kind with sound effects that aren’t relevant to gameplay with no dialogue. Seemed like he was alone so I held my tongue.

Eventually someone asked if he could turn it down. And his mom was apparently across the aisle the whole time right next to him, “oh he has earphones he just doesn’t like them.”

Flight attendant came over and said he needed to turn it off or put them on. I don’t blame that kid at all, but how can a parent just let that happen?”

“Was an RA for three years, we had a student and his mom aggressively call the dorm’s front office because “it’s been two weeks and nobody’s come to clean our room yet.””

“I was on a plane for a few hours today, and someone thought it was a good idea to play their music out loud for the whole plane because they couldn’t bother to use headphones.”

“A plane I was on almost got entirely de-planed because a woman at the front took her dog out of its crate and refused to put it back in.

Not to mention we were already 45 minutes delayed because the crew was late.”

“Saw some like 12 year old rich kid with his Dad at Guitar Center buying like $6,000 worth of recording equipment.

An item he was purchasing was on the lowest shelf, yet he snapped his fingers and pointed at it, telling an employee to “fetch this” for him.”

“Ex-friend was with me at lunch. The waiter came up to the table and she looked him up and down.

She shook her head and said “No… no, go get someone else, I’m not putting up with you for the next hour.”

We weren’t friends for long after that.”

“I was in a work environment where everyone eventually got a masters or Phd. You either did that or left the field. There was guy who had gotten his PhD and tried to get everyone to call him Dr.

No one did and everyone made fun of him. He was maybe 3-4 years older than most of us and just further along the path that we were on. In a few years we would all be academically equal but he would still be known as an a**hole.”

“When I worked at Best Buy we had a girl quit after her second day because she found out she had to vacuum her section at the end of the night.

Apparently she didn’t “do” vacuuming.”

“My husband and I host high school age exchange students (in Canada), they come from a bunch of different places in the world. Had this one boy from Southern Italy…….about 2 weeks in, we had this coversation:

The weird thing is that he did his clothes laundry – his hang up with the sheets was he didn’t know how to put it back together. Needless to say, he learned how to do laundry properly (1 load does not equal 4 socks….. that’s a waste of water), make a bed, and left to go home with some basic cooking skills and a couple recipes in his pocket (we taught him to boil water for pasta and he learned the hard way that the tomato sauce gets put in AFTER the water gets drained from the pot).

Kid was definitely a brat but his willingness to learn these things made us have the patience to teach him. This year he left home to go to University and sounds like some of these skills are working out for him.”

““I should have your laptop. You’re sick. You’ll never use it.”

This was my ex-friend telling me, someone who was on her (my) thirtieth round of chemo, that she (Ex-friend) should get my new laptop that was sent to me by a charity run by my hospital.”

Have you ever seen any entitled behavior that shocked you?

If so, tell us about it in the comments!