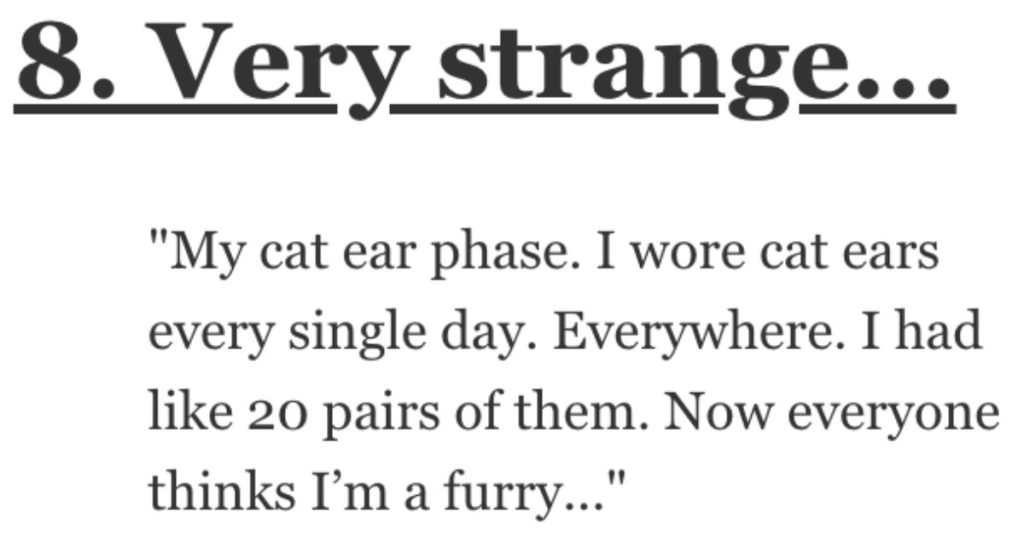 What’s the Most Regrettable Phase You Went Through in Life? People Admitted Their Shame.

I had a friend when I was growing up who went through every phase imaginable: grunge, punk, hippie, surfer (in Kansas), etc.

We don’t talk anymore, but if I ever run into him again, I’m gonna ask him which phase he regrets the most because I NEED TO KNOW.

People on AskReddit admitted the phrases they went through that embarrass them the most.

“When I was a teenager (early 2000s), I was waiting for my mother to pick me up and was wearing one of those s**tty sports wristwatches.

It was itching me so I took it off for a second, but then she arrived and because I was struggling to get it back on my wrist, I looped it around the equally s**tty chain I had around my neck in a rush to get out the door.

My mom asked me about it in the car, and I told her this was my new style and I planned to wear it like that every day. She rolled her eyes.

I wore that watch on a chain around my neck every single day for 3 years or so. There are even professional family photos where I’m wearing it because I refused to take it off.

One day, the chain broke and I lost the watch. I was in high school at that point anyway and it was a major lady repellent, so… phase over.”

“I was VERY into The Transformers when I was a wee lad in the 1980s. One day, I decided to change my name to the name of my favorite Autobot. My name was lame, and I wanted an awesome Transformer name.

And I was VERY insistent that my parents only call me by my new name. Calling me by my ‘old’ name would cause a big fat tantrum on my part.

So for the better part of a week, my poor parents had to call me Wheeljack.”

3. Can I interest you in a PT Cruiser?

“I went to a car show once as a teen, and the only newer car there was some chick’s PT cruiser.

It was hot glittery pink, and at the time I was obsessed. I insisted that one day I would have a hot pink car, with pink seats, pink dash, pink carpets, etc.

I was pretty heavily goth at the time, so my parents just rolled their eyes.”

Also could not afford a horse.”

“Trenchcoat phase after I saw The Matrix.

Turns out a gooy 13 year old doesn’t look or feel as bada** in one as Neo does.”

“I got a tattoo when I was 21 (a fairly big one) because I wanted to show my parents I was an adult and could do what I wanted with my body!

I absolutely loathe it now and am looking to get it removed.”

“My friend and I decided we were going to open a bar in Jamaica with exotic snakes in glass cages in the walls at each booth. We convinced ourselves it would be amazing for at least 2 years in college. It was going to be called Fredro’s.

My entire family made fun of me for it. Once we got out of college, we realized it was not feasible and joined the office grind. We’re also 2 white guys with no ties to Jamaica.”

Now everyone thinks I’m a furry…”

“I was obsessed with “The Craft” in junior high and was convinced that I was a witch.

I basically just drew pentagrams all over my school work and wore a lot of rings on my fingers.

“Acting like a thug … being 12 years old from a white middle class family but acting like a career criminal, born in the streets, who had done a nickel of hard time in the clink. At the mall on a Friday night giving you the crazy eye with my backward hat and baggy pants.

If someone did actually “try” me we would usually just bump chests and say “do something then” “go head then” “no you do something homie” walking in circles with my hands by my side because I’m more concerned about looking gangster than I am about defending myself. 9/10 times nothing would happen but I would definitely chalk it up as a win for my crew anyway.

Side note tho one of my best homies head butted a guy with terrible head butt technique and it knocked them both unconscious, but because my friend woke up and got up first he declared himself the victor, it was surprisingly hard to argue with that logic.

Also I had my nickname embroidered on my fitted hat from lids “Lil E” but because of the calligraphy style font and bad spacing it appeared to read Lile or Lily as most would pronounce it and that sucked a** … spent like a whole months allowance on that stupid hat never to be worn again, but also never forgotten by my friends.

“Dancing to One Direction and thinking I’d be in the background of their music video.

I actually said that this is going to be my career.”

Thought it made me look so hot and flirty.

Now I’m a professor and always have to wear high waisted pants so none of my students ever see it.”

In the comments, please tell us about your most embarrassing phase.