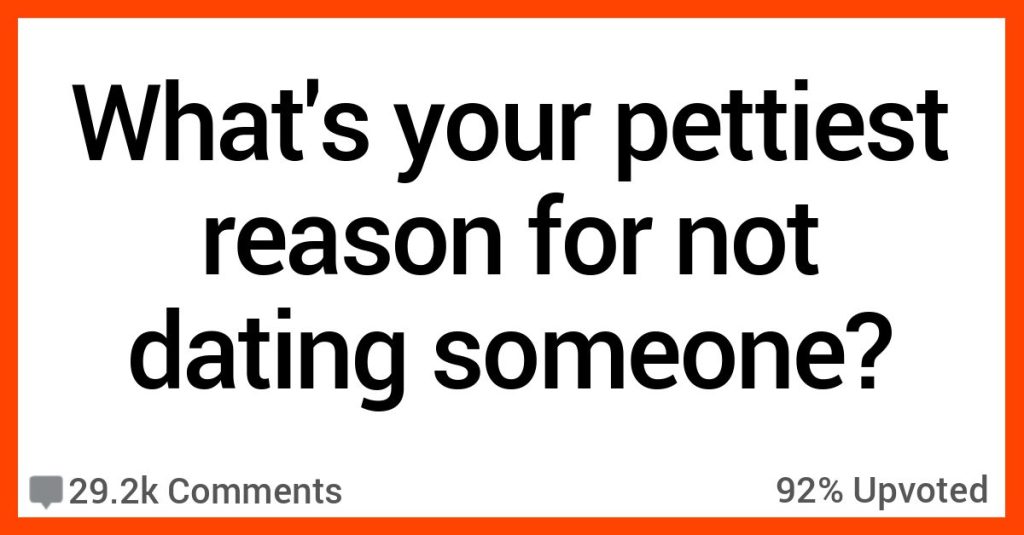 What’s the Pettiest Reason You Refused to Date Someone? Here’s What People Said.

Dating is can be really rough…

What’s more, relationships are even harder, so if there’s something that really bothers you on a first or second date, it’s probably going to be a dealbreaker eventually, right?

You might as well call it off without wasting anyone’s time then – or at least, that’s probably what these people figured when they gave totally petty reasons for refusing a second date.

1. OK this is petty af though.

My new car kept scraping on the bottom while pulling out of their steep driveway to the main road.

After the fourth time of trying to be careful and it still scraped……..

I went out with someone who has the same name as my cat.

I brought him back to my house and the second I got home I greeted my cat and the guy looked at me and I knew right then and there that I couldn’t do this.

3. I pictured this in my mind and laughed out loud.

Went on a first date to the movies.

This f**king guy…instead of picking up his drink and lifting the straw to his mouth, he would put his hands on his knees, keeping his eyes on the screen, and lean over to the drink and ‘hunt’ for the straw with his face and his mouth contorted sideways trying to land on the straw.

4. This happened on Seinfeld.

Her complete inability to follow the plot of a movie.

He stared at me blankly when I said the word “republican” when describing one of my family members.

I followed up and sure enough, he literally had no idea what the word republican meant and didn’t know about our largely two-party system. He was in his late 20’s.

A guy on a dating app said he wouldn’t date me because I didn’t like oysters.

7. That’s why you pick a fun name for your kid.

A very attractive, fun, smart woman asked me if I wanted to go get ice cream with her.

I turned her down but I guess in a way that she felt was flirty, so she kept asking.

And finally I had to tell her I was turning her down because she had both my mother’s first and last name.

She laughed a lot and agreed we couldn’t date.

I went out on a few dates with a guy that I had been really into for months.

I was starting to realize he wasn’t the brightest bulb in the room.

Then one day he said he liked watching commercials on TV and that was that.

9. It seems like a small thing but it’s really not.

He didn’t re-rack his weights. I will never, for the life of me, understand why people don’t return/re-rack their weights.

She didn’t know that foxes were real animals.

She thought they were mythical and just in movies.

All The Words In Every Text He Sent Were Capitalized.

Trust Me, It Got ANNOYING.

He would call me his “beautiful angle”.

He really didn’t know how to spell angel so for 5 months I put up with being an angle.

Also dated a guy who wanted to put a single wide trailer on his parent’s front lawn and thought I was unreasonable for not wanting to move in with him once he did so.

My mom stopped dating a guy because he unfastened and refastened the velcro on his shoes throughout an entire movie.

14. Was she Amy Farrah Fowler?

She would insist on a job interview level of formality whenever we talked.

For those asking for examples, the first time I asked her to my place went like this:

Me: So do you want to take this back to my place?

Her: Is this an invitation for intercourse?

15. Distracting is a nice word for it.

On the first and only date – she chewed her food with her mouth open – it was so distracting I couldn’t bear it.

16. That would be annoying.

He wore a Bluetooth piece in his ear. The constant blue light blinking from the side of his head was too much for me.

Another guy would text “dame” instead of “damn”. It wasn’t a typo either, it was every time.

Not me, but someone refusing to date me because, “it’s weird you don’t have Instagram.”

19. Excuse me, are you Jerry Seinfeld?

Everything was going great, thought she was an amazing girl and we’d been seeing each other for two months. Go to her house for the first time and it was a little messy, but nothing to write home about. Then I go to the bathroom and put up the toilet seat…

I don’t think she’d ever cleaned the bottom of the toilet seat given how disgusting it was. From then on, the only thing I could think about when talking or being with her was that disgusting toilet seat.

He was wearing a hideous brown fake leather jacket, it was so old that the ‘leather’ had started to flake off and parts were just now canvas.

He kept stopping to look at himself in windows and saying ‘oh god I look so hot today’ ‘I just can’t believe how hot I look’ smoothing down his manky jacket, side eyeing me, expecting me to agree with him.

I left so he could be alone with his jacket.

I’ve gotta say, I don’t hate most of these reasons.