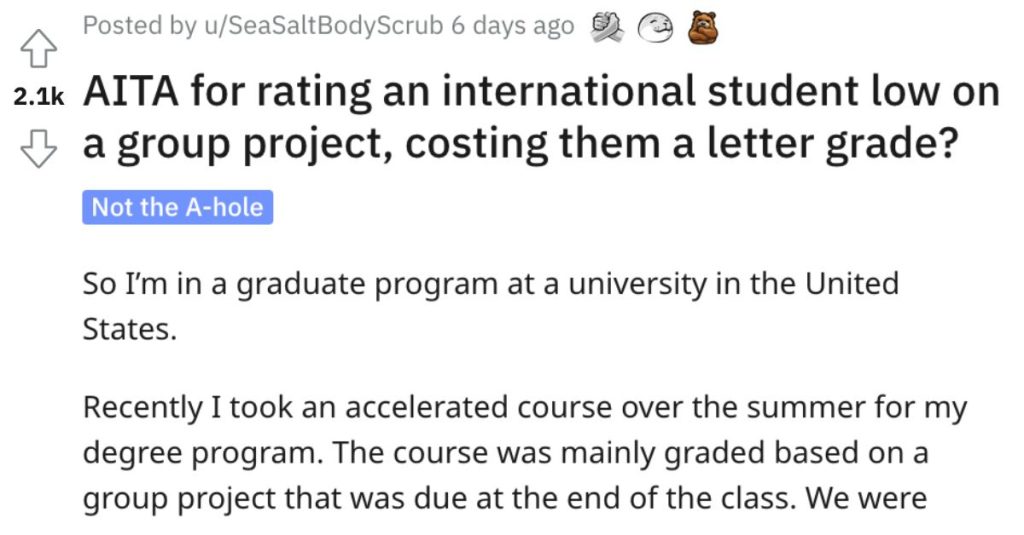 They Caused a Foreign Student to Get a Bad Grade on a Group Project. Were They Wrong?

Are group projects the worst, or what?

I did a number of them when I was in school and all I can say is that I don’t miss doing them. At all.

And sometimes they can lead to some hard feelings, as you’re about to see in this story from the “Am I the A**hole?” page on Reddit.

Read on to see what went down.

AITA for rating an international student low on a group project, costing them a letter grade?

“So I’m in a graduate program at a university in the United States.

Recently I took an accelerated course over the summer for my degree program. The course was mainly graded based on a group project that was due at the end of the class. We were randomly split up into groups of 4 students. One of my group members was a student from overseas*.

During the project, he would basically just sit and stare at his iPad and wouldn’t really contribute. Anytime he did contribute, it was minimal (like suggesting a font change on the PowerPoint, but not actually helping make the PowerPoint). We had to re-do all of his work because his English was so bad that it didn’t make sense unless you knew what we were trying to say. So, all in all, he didn’t contribute much, and was really quite a burden on the team.

I want to stress that we tried multiple times to get him involved in a productive way and he would functionally just ignore us, or would put in minimal effort (see: font changes) before going back to doing nothing.

At the end of the project, we had a chance to rate the other group members on a ranked scale. I rated my other two classmates a 100% and gave the group member in question a 70%. I explained why, quote for quote, as follows: “X was not a great team member in that he contributed very little to discussion or the final product we were working towards.

We made numerous attempts to engage with him and he rebuffed them all. His contributions when he would work were minimal and oftentimes had to be redone by fellow team members. He was nonresponsive to group messages or emails, and arranging a time to meet with him was difficult. His contributions to conversation, when not limited, were outlandish and out of context for the project we were working on. Overall I would not choose to work with X again.”

After the final grades came out, X messaged our group chat and asked what everyone had rated him on the review. The other two teammates said they had given everyone 100%. X replied “oh, guess SeaSaltBodyScrub rated me lower.” I replied I had, because I felt he didn’t contribute much, and outlined the reasons why.

Long-story short, X has filed a complaint against me with the university Dean of Diversity & Inclusion. He claims I discriminated against him for being foreign/Asian. I am not worried about the outcome of this meeting, but looking back I do wonder if a lot of the barriers were due to his language barrier itself.

On one hand, being an international student is difficult and scary, and he might have had a hard time adjusting, so maybe I should have been more understanding? On the other, you need to pass English proficiency to attend school here, so he should be able to function just fine in class, making me believe he chose to be lazy and is just angry he got called out and penalized for it.

My friends/classmates are split on this.

Hmmmm…now take a look at what Reddit users had to say about this.

This reader said that the grade they did give this guy sounds like it wasn’t even warranted. 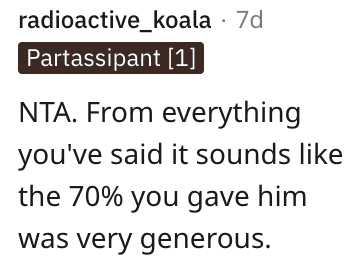 Another person had a similar experience with a group project when they were in school. 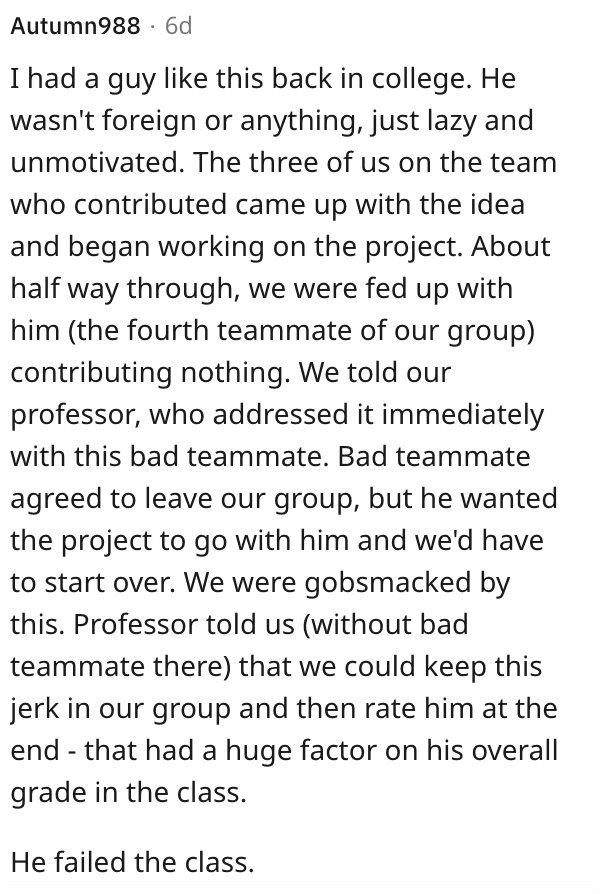 Another individual said that this person didn’t act like an a**hole at all. 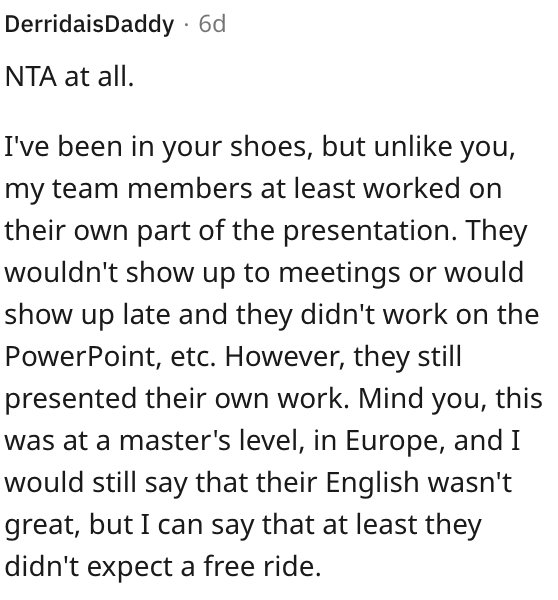 And this Reddit user said that this guy just didn’t want to do any work at all. 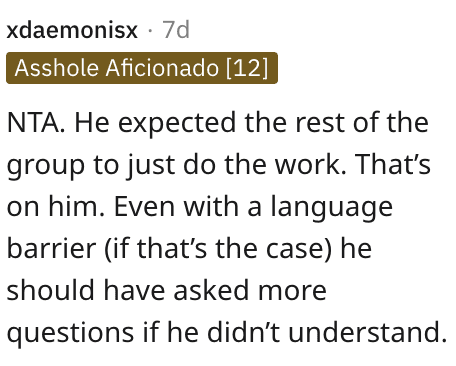 Or were they justified in their actions?

Let us know in the comments. Thanks!