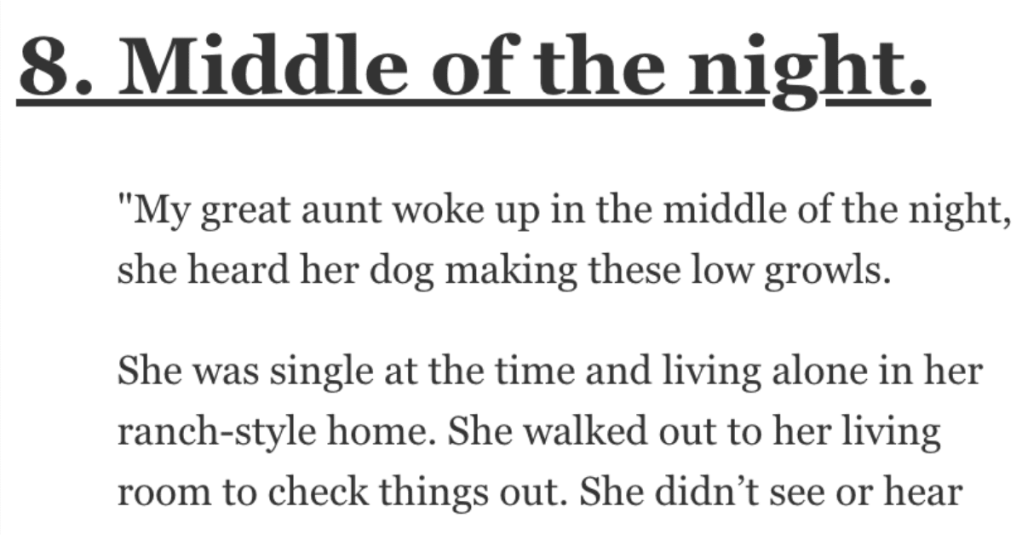 What’s the Scariest True Story You Know? People Spoke Up.

I’m a true crime fanatic and I love reading and hearing about true stories that are disturbing and scary.

Does that make me a weirdo?

Perhaps, but at least now I know I’m not alone, judging by how many people out there are obviously into the same kind of stuff.

Folks on AskReddit shared the scariest true stories they know.

Prepare to get creeped out.

“I grew up in a funeral home. I helped out in the office.

When I was about 15, we got a call from a man whose wife and infant baby had been m**dered in cold blood.

There were very few clues. It made headlines. Cops set up surveillance at the viewing. It was heartbreaking, as the mother was holding the baby in her arms.

I was asked to take the flower cards and periodically get the husband and ask if he recognized the names. I then photocopied them and put them back. I did it because I was a “kid,” people knew me, and I was unobtrusive.

I talked to the husband quite a bit. He seemed devastated and shaken.

The cops told me they had an eyewitness to someone leaving the house the day of the m**der.

The witness was a three year old girl. She recognized the man leaving. It was the husbands best friend.

Turns out that the friend and the husband had made a pact to k**l each other’s families and run off with their secretaries. The little girl identified the friend, and I guess one of them cracked.

They both went to jail on multiple counts, all on the testimony of a three year old.

I still cannot believe to this day that that man stood right beside me, multiple times, and I had NO CLUE.”

He was just 2 years old and with his mom running errands. She let go of his hand to pay the cashier, and he wandered away. Two ten year old boys spotted him, lured him toward them, took him by the hands and led him away. They took him to a remote location, pushing and kicking at him the whole time.

Some people questioned the two kids with the crying toddler, but they lied saying he was their brother and nobody intervened further. They took him to a secluded spot and t**tured him. I don’t want to recount the t**ture details, it’s just too gruesome. They left his body on some railroad tracks hoping that being run over by a train would make it look like an accident. He was found days later, his body severed in half by a train.

The boys were caught and became the youngest convicted m**derers in British history. Security footage from the day they took James shows them watching children, picking out a target. And they were just kids themselves. They were released at 18. One of them is back in jail for possessing child abuse photos on his computer.

The most terrifying thing about this for me is that my own son is only 2 now, and James’s m**derers were just children, too. It was premeditated and intentional and entirely random. Just a momentary lapse in attention and he became a target of two m**derous children. Children.

To think that children younger than my step son are capable of such a thing… ugh. Everything about this case is just horrifying.”

“My dad worked in a morgue in during college in the 60’s.

One time on the night shift he was training a recent hire who was wheeling a body down the hallway. The body was under a sheet but all of a sudden started to sit up. The guy immediately freaked out, ran out the doors and quit.

Apparently a d**d body can have muscle contractions in the abs causing it to start sitting up. The more you know I guess.”

“During college, I lived in an apartment with a community pool. There were a bunch of us having beers at the pool one night over summer term, and one of my friends ran to jump in the pool but changed his mind at the last second.

His feet slipped out from under him on the wet concrete and he went down. He broke his neck in the edge of the pool…never walked again and had extremely limited upper body function.

I watched someone’s life be ruined and it was terrifying. Listen to the lifeguard and walk.”

“I had a guy tell me a story a couple decades ago about how he was hiking in an area in South America and wandered away from other hikers in the area.

The ground was wet and without warning it gave away and he got sucked into a fast moving underground river- pitch black, completely submerged, and at the mercy of the current as it buffeted him against the sides of the tunnel. After some time the current subsided and he realized he was in a larger pocket, still pitch black and submerged.

He said that even as he struggled to hold his breath, he didn’t panic and realized that the water had to keep moving somewhere, so he moved around until he found another tunnel that sucked him in.

At one point he began to see light so he punched upwards, broke through the ground and pulled himself out, soaking wet, gasping for air, and a bit of a distance from the other dry hikers, who were somewhat bewildered when they saw him straggling up to them.”

A school in Texas in 1937 tried to tap into natural gas on their own and it ended up leaking and blowing up the school. It’s the reason they make natural gas scented in Texas and probably the US now. I’m amazed I never heard of this in school because it seems like something that should be taught.

I read some survivor stories and I had f**king nightmares. It was horrible. Three in particular stuck with me. One was a 7 or 8 year old girl, she saw her best friend and playmate with her entire body crushed by concrete with only her shoulders and head above it, and she still had a lollipop in her mouth like she didn’t know what happened.

Another was a guy I think a 16-17 year old, helping un-dig people and bring them out of the wreckage. He saw a dad holding his daughter crying his eyes out while the back of the girls head was broken open with her brain on the ground next to her.

The last was a 9ish year old girl who went to find her mom after it happened (there was a PTA meeting going on at the time so there was a lot of parents at the scene) her mom was freaking out trying to find her but didn’t even recognize her. She went upto her mom and called out to her but she just kept saying ‘you’re not my daughter.” She was so covered in blood and ash and tears that her own mother couldn’t recognize her.

It was a truly horrifying thing.”

Faye Swetlik was 6 years old when she was kidnapped out of her front yard. It was all over the news. I had news crews, cops, even the FBI all over my townhouse complex. My fiancée and I met with the FBI 3 times. They searched our home and everything. I remember clear as day, my fiancée FaceTimed me as the cops were digging through the trash cans directly in front of my townhouse.

They pulled out her boot and a bloody knife. Then they found her body, dumped maybe 300 feet from my house. He had watched them find the m**der weapon. Dumbass put it in a trash bag along with his other mail. He went to his back porch and opened his own throat.

It’s crazy. I had conversations with the guy. I never knew he was a psycho. This all happened a year ago.”

“My great aunt woke up in the middle of the night, she heard her dog making these low growls.

She was single at the time and living alone in her ranch-style home. She walked out to her living room to check things out. She didn’t see or hear anything out of the ordinary, so she decided to make sure her door and front windows were locked. Door was locked, first window she checked was locked.

When she lifted the mini blind on the second window, it was wide open and a guy in a ski mask was standing there. She said he laughed this evil laugh and said “party time” then he started to climb in. She screamed that she had a g**, her dog started barking his head off. The would be r**ist decided to bolt. My aunt did get a g** after that and learned how to use it.

I can’t even think about what would’ve happened to her if she didn’t have her dog to warn her.”

“The kidnapping of Colleen Stan. She was hitchhiking in the 70s, and turned down rides because they didn’t seem safe.

A van with a young couple and a baby offered her a ride, and because it was a family, she accepted. They held her at gun point, put a giant box on her head that blocked out noise and sound, and later, kept her in box the size of a coffin underneath their bed. She was brutally beaten and r**ed daily for 7 years. They also brainwashed her to believe that they were part of a mafia called “The Company” that would k**l her family if she tried to escape.

Eventually, the wife helped her escape and received immunity for testifying against her husband at trial. The case is known as “The Girl in the Box.””

The copilot locked himself in the cockpit and set the airplane for a slow descent into the French Alps.

For 10 minutes, the crew desperately tried to get back into the cockpit, but in this post 9/11 world, the door was design to withstand assault did not fail.

This is was a daytime flight. Passengers knew what was happening. They could see the mountains getting closer out the windows. This wasn’t a quick, “what’s that… omg… out”… this was a long, drawn out realization of what was coming and the end was inevitable.

“The story of Christopher Duntsch aka Doctor D**th who operated out of the Plano and Dallas area.

He maimed 33 people and ki**ed 2. He was an alleged neurosurgeon that didn’t actually receive a proper medical education to operate, but still did so despite not fully being trained. No hospital would report him or take his license away. They would just pass him off to another hospital to continue injuring or ki**ing people.

He was the first doctor to be formally indicated with m**der, and sentenced to life imprisonment.”

“My brother was a police officer.

He had a call to check on the welfare of a mother who had not showed up for work. She had d**d on the sofa and her little toddler brought the little diaper pad and laid down next to her, and d**d of dehydration.

The little kid had opened the lower cabinets and drawers in the kitchen looking for food. He still cries about it. And he’s not the crying kind”

In the comments, tell us about the scariest true story you know.