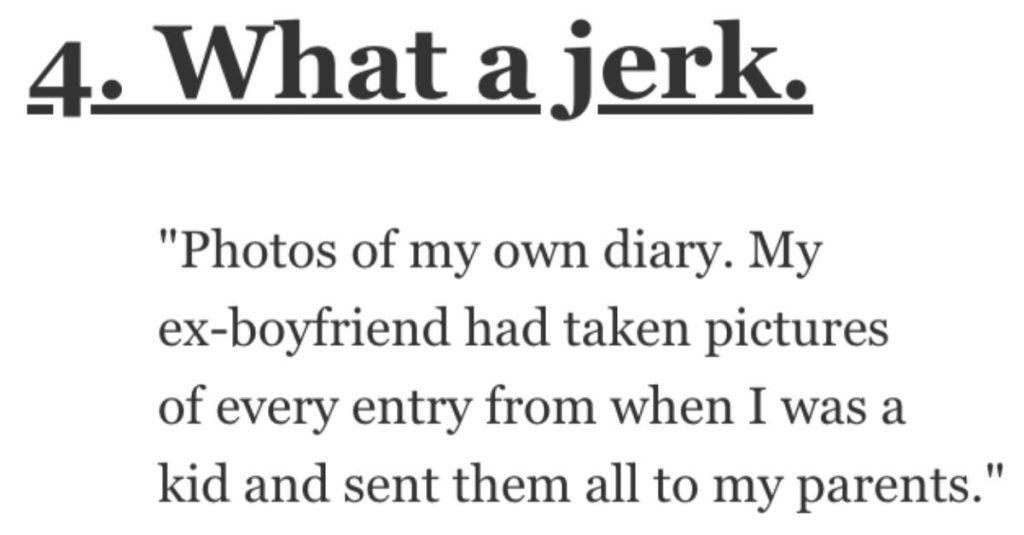 They see a phone and they have to snoop.

Maybe it belongs to a family member, a sibling, or a significant other…they just have to get their grubby little hands on that device and go to town!

And today we’re going to hear from folks about the worst things they’ve found on someone’s phone.

“I am a librarian.

I can’t tell you how many times people have handed me their phone only to have their web browser be open to full on p**n.”

That one was a bit of a shock.”

“That my best friend’s recently deceased husband had been cheating on her with men their entire relationship.

She was standing over my shoulder reading, as we made the discovery together.”

“Photos of my own diary.

My ex-boyfriend had taken pictures of every entry from when I was a kid and sent them all to my parents.”

Found messages on my mother’s phone about her failed s**cide attempts and how she never wanted her kids to know about them.

Didn’t speak a word about what I saw, internalized the fear.

She successfully took her life less than a year later.”

Not just messages to other women but also chatting with teenage girls in explicit and derogatory ways. Also, trying to meet up with a 16 year old. When confronted he said he was never going to act on any of it.

“My ex wife’s iTunes on her iPhone was actually my account that I set up for my iPad, she was just too lazy to set up a new account.

So I told her if she did that that her iMessages would come through to my iPad. She said she didn’t care…until she started cheating on me and I got the texts directly to my iPad.”

“I found out my wife is d**ng after I read messages exchanged between her and her sister. I guess she was too afraid to tell me just yet.

I waited till she wanted to tell me on her own before I told her that I had seen the messages and had already known.”

“I had just finished having s** with my gf at the time. Literally, right after finishing she turns over and sends a text then got up to go to the bathroom.

The person responded with “so you finished up with him, when is he leaving?” It was the dude she was cheating on me with.”

“I found a plethora of nudes of my friends and several other boys and girls at our high school, including mine.

My friends and I never sent him nudes nor did we have any s**ual/romantic interest in this person. I assume the same for the others.”

“My dad d**d about a year and a half ago in a car accident.

I went through his phone after he passed and he had taken pictures of the bay near where he grew up the morning of his accident and he had a half written text message to me making plans to see me for Christmas.

It’s not like those things are shocking, but it’s shocking and awful in a way that it’s a view into a life cut short. It was 2 days before Christmas and he was reminiscing about his childhood and planning with his children and it all just ended in the blink of an eye. It guts me every time I think about it.”

“My boss telling his second in command all the things he loved doing to her during their affair. Her phone was just on the table and up popped the message.