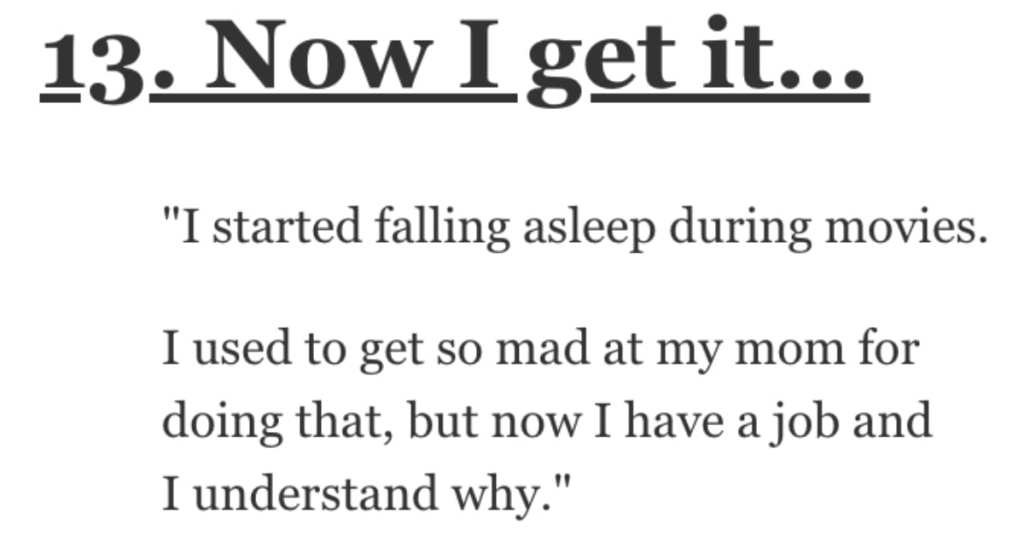 What’s Your Biggest “I’m Turning Into My Parents” Moment? Here’s What People Had to Say.

Backing up into parking spaces. Filling the water in the coffee machine the night before so it will be ready in the morning. Getting to the airport four hours before my flight.

These are all things that I’ve found myself doing over the past couple of years…and it suddenly dawned on me that I’M TURNING INTO MY FATHER.

Which isn’t a bad thing. My dad’s a cool guy, but I definitely used to laugh at the kind of stuff that he did when I was younger…but here we are, people!

When did you realize that you were turning into your parents?

1. Gotta do it yourself.

“When I was cleaning the kitchen and didn’t want anyone else to help because I felt like it wouldn’t be done right.”

“There is a shower in my basement that no one ever uses.

There are a couple dead bugs in it that I’ve never bothered to clean up. When our niece came to stay with us for a few days, she planned to stay in the basement.

My wife asked why I hadn’t cleaned the dead bugs out of the shower, I opened my mouth and heard my dad say, “They go with the decor.””

“Yelled at my kid and at the same time saw myself out the corner of my eye in the mirror.

I was yelling something my dad used to yell at me, and I look a lot like him.

I hated it when I was a kid, and immediately apologized to my kid.”

“I rearrange the plates in the dishwasher if my boyfriend put them “wrong” so I can do full loads and use up all the space.”

6. What the hell do you think you’re doing?

“Getting annoyed when my roommate was throwing Tupperware lids and containers into the cupboard without ANY organization.”

“When I went thru my house the other day, yelling to my two young kids, “When you leave a room, turn the LIGHTS OFF!! This costs money!!”

“Going grocery shopping or folding laundry on a Friday/Saturday night.

Thinking 8pm is too late to leave the house to do anything.

In my defense it IS a pandemic, so not much to do otherwise.

“Last night, when I got worried because my fiancé was 5 minutes late coming home from the gym and I caught myself saying “I can’t help it, I worry about you.”

Bam, I have become my mother.”

“When I get takeout sometimes I think, this is a nice container I’m gonna keep this and add it to my Tupperware.”

“My parents were always early risers.

On Sunday they’re up and banging around in the kitchen by 7am. They made enough racket that even though we had a pretty big house that they’d always wake me up. Always pissed me off.

When i moved out six years ago i thought “finally, I’ll be able to sleep in.” But i can’t. Even without an alarm, on vacation, I’m awake by 7-7:30. If I’m really exhausted i might be able to sleep in until ALMOST 8:30, but no later.

It’s advantageous in a lot of ways but just once in a while I’d like to sleep in.”

“I no longer tolerate clutter.

This past week alone, I sorted out the spice cabinet to the degree that I ended up trashing about 50 vials of expired herbs, spices and sauces, the oldest of which was a bottle of soy from 2013. It was a long overdue task and normally I HATE doing anything resembling housework but LAWDY, it was immensely satisfying to see everything neat, tidy and easily accessible.

I also have started a binder/folder system to store all important documents that were building up on the overstuffed noticeboard, I’m about to tackle the hoard of books under the coffee table and sometime during the weekend, I might even clear out the medicine cabinet.

I also spotted a box of “Microwave Cleaner” on sale in the store today and my first thought was “ooh, €1.50 a box! That’ll be handy.”

I can’t believe I’m saying this but doing housework has made me feel so much more productive in this pandemic along with giving my depression a bit of a kick up the arse.

It’s not an outright cure-all but I’m more happy going to bed exhausted by a busy day and feeling accomplished by the end of it rather than lying awake all night lamenting the fact that I’ve wasted my waking hours once again.”

“I started falling asleep during movies.

I used to get so mad at my mom for doing that, but now I have a job and I understand why.”

Have you realized that you’re turning into your parents yet?