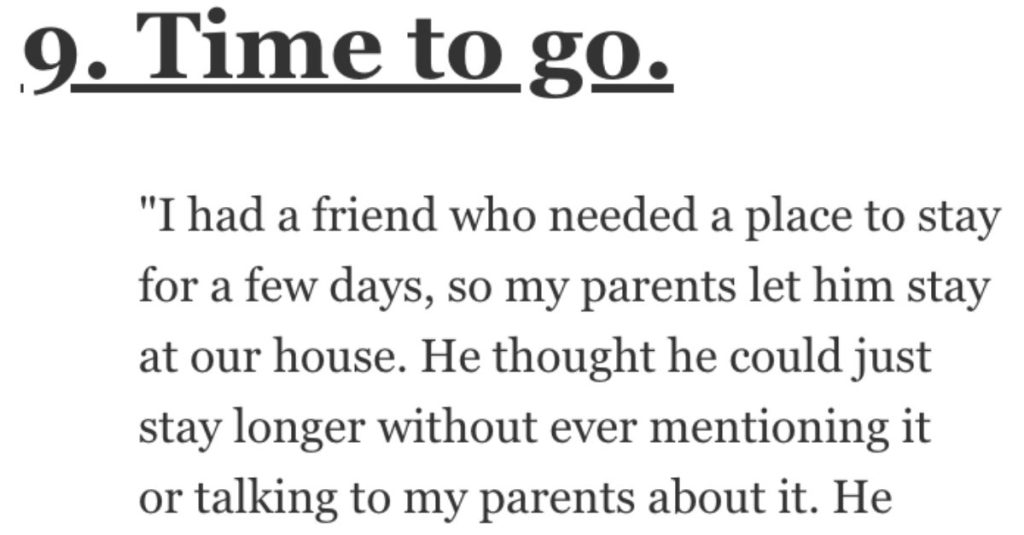 I’m so paranoid about being a bad guest that I go WAY out of my way to not step on any toes or bother my hosts that I probably overdo it.

But I’d rather be on that side of the equation than be the kind of person that no one ever wants to allow in their home again.

Ya know what I’m saying?

Folks on AskReddit shared stories about their worst houseguests.

Prepare to get annoyed…

“My roommate started seeing a guy who didn’t have a car and lived in the town over (about a twenty minute drive).

She would pick up him from his house and bring him to ours but she didn’t always want to drive him home the next morning because she would have to work early. This quickly turned into him staying at our apartment full time, despite protests from my second roommate and I.

After about two weeks, I noticed over $100 was missing from my wallet. He and I were the only two in our apartment all day. My wallet had been in my bedroom while I was watching TV in the living room.

He’d been locked away in her room all day, but I also can’t see down the hall that led to all of our bedrooms from there living room. So it was easy to figure out that he had snuck down the hall and gotten into my wallet. But she refused to believe me.

I kept my bedroom door locked for a while and kept my valuables inside until i was able to get a camera set up. Then I left my door unlocked one day with a small amount of cash in my wallet in front of the camera to lure him. It worked like a charm and I got him on camera stealing from me again.

Showing them the video got my roommate to believe me, but he still tried to deny it. He got dumped and kicked out but I lost about $150 that I never saw again.”

“My former friend begged me to help her find a place where her special needs kiddos could stay in the same school/services where her husband wouldn’t look for her after supposedly finding questionable material on his pc.

I work with special needs populations including a**se victims so it made sense to come to me I gave her an older laptop I had for her use so she could turn in the house pcs. I bought her a new phone. I took them in myself which meant giving up my actual room for several weeks and sleeping on a futon.

I also spent a lot of time babysitting so she could go talk to lawyers/providers. Imagine my surprise when I went to pick up the kids from school one day when she supposedly had court to extend the restraining order and bumped into dad and grandma.

Eventually it came out that there was no restraining order, no court filings, no suspect files found. Mom had a new boyfriend and had told her husband she was divorcing him and her family wouldn’t take her in.”

“Some family friends came over with their 30 yo son unannounced, took a nap on our sofa full-on shoes off, made us turn off the TV bc it was too loud.

Then Venmo charged us for snacks they brought even though we didn’t ask for anything.

I literally felt like I was the one who was visiting.”

My mother hired a clown for my brothers second or third birthday party. My mother made the mistake of offering her a cup of coffee after she was done performing and she seemed to take that as a cue to stay for awhile. Hours pass.

The party guests are long gone and the clown is still there drinking the coffee chatting with my mother still in full makeup and outfit. She ended up staying the entire day until my mom got fed up and told her she had to go because she had to prepare dinner.”

“She stole all of my booze, pi**ed on my couch, tore up the flower bed to the side of my driveway, and destroyed my guest bathroom.

This all happened after I’d fallen asleep, she was a guest of a tenant/room mate and that room mate was told either her friend wasn’t allowed over ever again or she’d have to find a new place to live.”

“One of my best buddies from high school called me up and begged for me to come get him from a town about three hours away.

The idea was he would stay with us for a couple weeks while he looked for work and then get his own place. Six months later I ended up renting him a room for one month and dropping him off with his junk and wishing him well.

His father had warned me he would “drain me dry” and he wasn’t kidding. All those months he was supposedly using my vehicle to look for work he was instead going out to a local bar. Every bottle in our liquor cabinet was drained down to the last finger.”

“Couple came for a weekend to my small apartment… surprised that they brought 3 dogs and an extra friend.

The puppy took a dump on my floor in the night, which nobody got up to clean. another dog had a crate but managed to get a hold of a carpet outside of the crate, drag it in, and shred it.

They also chewed up cardboard and wooden furniture. When they left, all the shredded stuff was just where it fell.”

“A former friend of ours called us and said that her house caught on fire, so naturally we offered a soft place to land while she was dealing with the fall out. So we went and picked her up, brought her home, and got her set up for the night.

The next day, she grabbed what she could from her apartment and brought it over to our house. My wife washed all of her clothes, which by the way smelled the way you’d expect from being in a house fire. Unfortunately, that scent is REALLY hard to get out, so our house smelled of fire for a long time as my wife was washing the clothes multiple times.

Eventually, we realized she was not trying at all to get her life back in order. She also wasn’t helping at all at our house, with getting her things together. She apparently just decided that she was going to apparently just stay with us and coast I guess? Ultimately she then started being really critical of anything we did, tried to start drama, and was generally unpleasant to be around.

What finally broke the camels back was that I returned one day to find her and someone we had never met before smoking in our front porch. Not really a big deal, but it was odd that she didn’t let us know that she was inviting anyone into our house. The next day I went to take my Adderall that I had just filled and noticed that there were like 5 left from the prescription. Her and her friend helped themselves to my meds!

After that she announced that she was going to stay somewhere that she was “welcome”, and that we could throw the clothes and items away that we had at our house because she didn’t want them any more because they smelled too much like smoke.

The best came after she moved out, we read a story about the fire in the newspaper about the cause of the fire. She had caused it by smoking on the back deck of her apartment by carelessly not putting the c**arette out.

We never really saw her again, she tried to make contact but we just noped out. She ended up moving in with some of our other friends, which we tried to warn them about, and ended up almost accidentally k**ling their dog due to carelessness before being kicked out by them.

“I had a friend who needed a place to stay for a few days, so my parents let him stay at our house.

He thought he could just stay longer without ever mentioning it or talking to my parents about it. He refused to find another placeto live or try to make money, so he ended up staying with us for almost a month. He would trap people in conversations where he would just talk about himself for two hours straight.

He complained about us not having the foods he wanted, would not stop talking about he was an incredible musician, and said his future plan was to go to LA despite having no job prospects, connections, a place to live, money, or any valid IDs. Within hours of him leaving he texted me about how he wanted to come over the next day. He is not allowed at our house anymore.”

“My mom’s cousin and her husband went for a short visit to our house.

She was five months pregnant then.

She and her husband didn’t leave until the baby was two months old.”

“My ex-wife’s friend had her car break down, and our apartment was right on a bus route to her job. She was supposed to stay over for a week while she got her car fixed.

After 2 months and a lot of warning, we packed her bags for her and put them by the door.”

“Had a roommate ask if the rest of us were okay with their high school friend crashing for a few days on their way through town to a festival.

Gave us the dates and it was less than a handful of nights so we were all fine with it under the condition they didn’t get a key for the place, they left when we all went to work and they organized with the roommate when they were off work to come back. Great way to visit a city that you don’t live in for a few days, right?

Turns out it wasn’t just the friend, it was the friend and her boyfriend and their other friend. And the roommate gave them a key and told them to just make it look like they were following the arrangement we’d all agreed on, they sold their festival tickets to buy acid and weed, didn’t tell us they were no longer going to the festival until the night after they were supposed to have been gone.

And then we were told that our roommate said they could stay for as long as they wanted without pitching in because they were both actually homeless and jobless and trying to move to Vancouver. Everyone who actually lived there left for work, still unaware that our roommate had given them a key, and then came home to them having a party with a bunch of people over, none of whom lived there.

They got the boot, and thankfully we had to renew our lease right away so we renewed it with one fewer name attached.”

Do you have any bad houseguest stories?